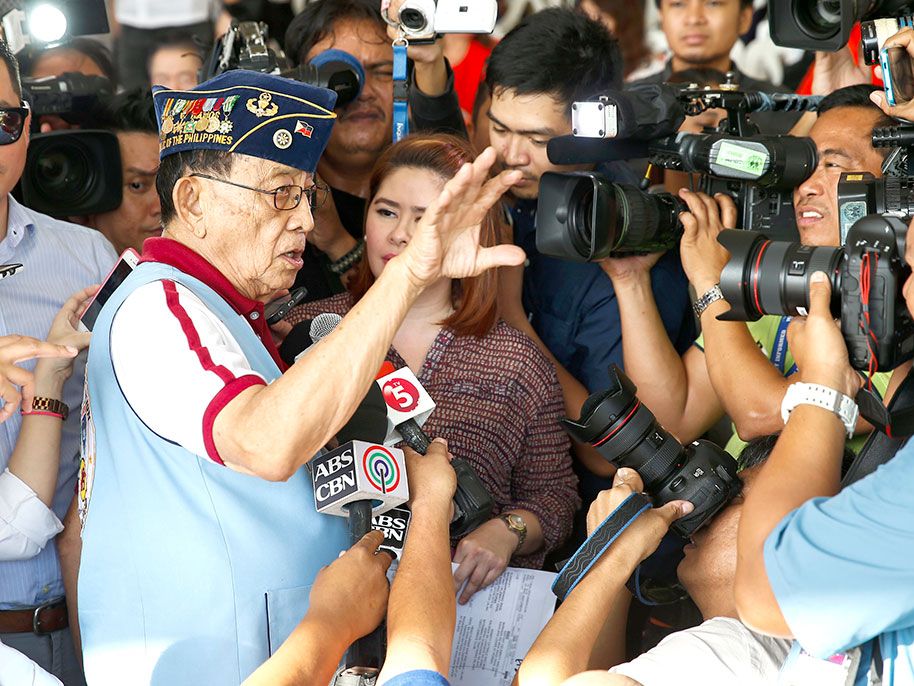 In 1986, the uprising of a people united by their faith against an encroached dictator drew the admiration of the whole world. More than thirty years later, the disappointment of the people for the failed promises of social justice gave way to the return of the same dictator as a national hero.

In early November 1985, the dictator Ferdinand Marcos surprised everyone by declaring his willingness to hold a “snap” election. This way he meant to take the opposition by surprise. The discontent in the Philippines against him had grown exponentially since the assassination of Ninoy Aquino, the leader of the opposition. Confident that the opposition, fractured by deep ideological divisions, had no chance, Marcos set the election for February 7, 1986.

On February 15, 1986, amid cries of foul from the opposition, the National Assembly declared Marcos the winner. Nevertheless Radio Veritas continued coverage of The National Citizens’ Movement for Free Elections’ count which showed Marcos losing. On February 22, Radio Veritas broadcasted a conference by Defense Minister Juan Ponce Enrile and Acting Army Chief of Staff  Fidel Ramos which declared Marcos to be the loser.

The Power of Prayer
Cardinal Sin, speaking over Radio Veritas that night, urged the people to be calm and pray for a just and peaceful resolution to the crisis. He called on civilians to protect Camp Aguinaldo and Camp Crame where Enrile and Ramos were taking their stand with some four hundred armed supporters.

His plea struck a responsive chord in the nation and within hours, thousands gathered outside the camp gates. By Sunday night, their numbers had grown to over a million, forming a human barricade, led by sisters waving rosaries. The soldiers and tanks sent by Marcos refused to attack. In front of the eyes of the whole world, the peaceful EDSA Revolution had prevailed.

The 1986 popular revolt, led by Aquino’s widow, Corazon, sent the ailing Marcos and his family fleeing to Hawaii, finally restoring democracy to the Philippines. In the wake of the peaceful “People Power” uprising, the carefully manufactured figure of a courageous war hero-turned-leader concerned only for his people quickly fell apart, and his powerful wife became a figure of ridicule. Marcos died in Hawaii in 1989 as one of the most despised rulers of the Philippines.

The Astonishing Come Back
By an irony of history, last year, his astonishing come back was sealed when the dictator was finally buried at Libingan ng Mga Bayani (The Burial Ground for Heroes), after the Supreme Court endorsed a decision by President Duterte, a friend of the Marcos family, to allow the burial.

Archbishop Soc Villegas, who had lived the exciting days of the EDSA Revolution at the side of the charismatic Cardinal Sin, now cries like the exiles “by the rivers of Babylon” (Psalm 137): “Thirty-one years after EDSA, I hear our people ask: What shall we celebrate? What is there to celebrate? At the corner of EDSA and Ortigas, I want to sit and weep as I remember the four glorious days of February 1986. The glory now flickers in the darkness of fear and terror again. The bloodless revolt is now stained by the blood in our streets, the blood of the relentless killing of the poor… The plunderers are now heroes… It is a nightmare. It is a shame!”(Open letter to Cardinal Sin, February 2017).

Unfortunately, the tears now come too late. EDSA was a missed opportunity: enthusiasm, unity, were dreams then. More than thirty years later, the bitter truth is that the governments of the heroes of the EDSA Revolution have betrayed the people, the poor: no real land reform, no living salaries, no health provisions for the working class and the poor, no fight against drugs and very little against corruption.

“Musical Chairs”
The present administration, with all the noise of change, is not doing differently: the war on drugs is so weird that it is only promoting impunity in the holders of power. The coming back of the family of the ousted dictator spells doom for a different, better future. The incumbent president hobnobbing with the Marcoses shows that it is the traditional dynasties that are alternating on the seat of power and in so doing they resemble the game of “musical chairs”.

The most scathing article describing this situation was published by Rina Jimenez-David, commenting the celebration of the birthday of one of the protagonists, with the title: “A lineup of villains”. “Indeed, the photos of the occupants of the head table at the recent 80th birthday of former president Erap Estrada reminded many of the opening scene of the first “Godfather” movie: the crème de la crème of Mafiosi gathered at a wedding banquet.”

“Not one of them is untouched by allegation of corruption; house arrest and at least one conviction spice up their collective resume. They are the reason the Philippines remain poor, said a commenter on FB, giving the public a capsule lesson in recent Philippine history.”

The same gathering of the usual leaders was also at the 60th marriage anniversary of Enrile. The country is firmly handled by the traditional lords and the ideal value of the EDSA Revolution remains as a reproach to a ruling class that has failed to involve the majority of the citizens in the benefits of social progress.

I like to conclude with the sedated words of Cardinal Tagle. He noted that “the EDSA Revolution was an event of people relying on their faith for social transformation. In full view of the world, the Filipino people showed the power of prayer that begets courage that begets solidarity that begets change”. He concluded: “More than thirty years later, we thank God for the gift of faith, as we also ask pardon for our personal and communal failure in consistently living that faith in justice, love and peace.”

The Power of Prayer

It was the first gathering of such kind in the history of the world: a meeting of all religions to pray for peace in the city of Saint Francis. It was the most original and courageous initiative of…