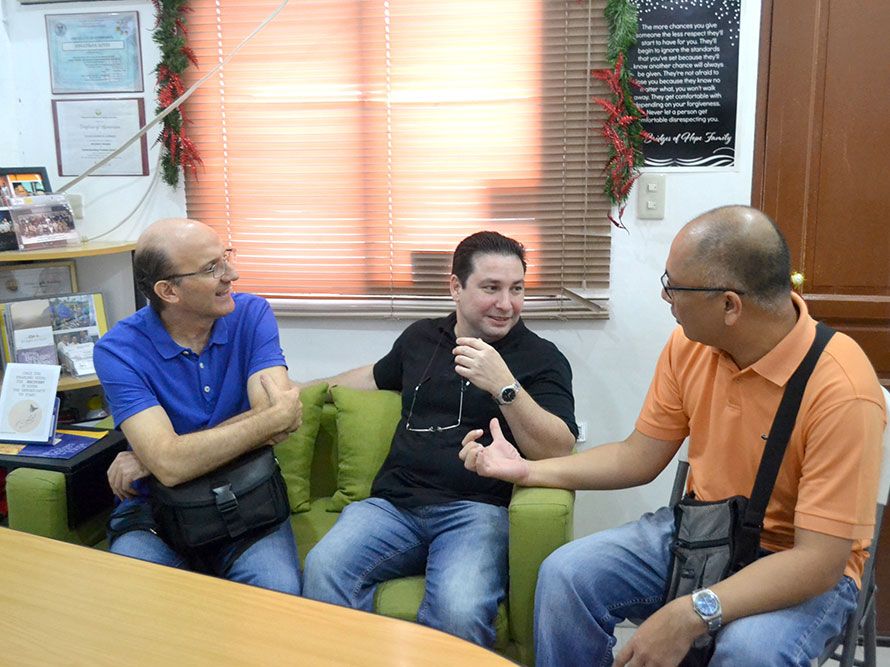 After reaching the abyss of drug addiction and rediscovering his spiritual faith, Guillermo Gomez is leading other recovering drug dependents to rehabilitation and true healing.

January 26, 2012 was the last day Guillermo “Gimo” Gomez took shabu. “I am a recovering drug addict and will remain one until I’m buried six feet under the ground. If I am able to stay drug-free until the day I die, only then will I be truly cured of drug addiction,” says Gimo (pronounced “GEE-mow”).

His three-decade-long struggle against drug addiction is filled with despair, anger, and pain. Yet it is also a powerful story of love, hope and redemption.

Escaping From Reality
Crystal methamphetamine was first sold in the Philippines in the mid-1980s. Popularly known as shabu, it is now the illicit drug of choice for the majority of drug addicts in the country. Since trying shabu for the first time as a teenager in 1988, Gimo has been arrested, jailed, separated from his family, rehabilitated four times and relapsed the same number of times.

“I was an escapist seeking distraction from the unpleasant realities of life, and shabu provided the diversion I needed,” he says. Gimo remembers his hands shaking with excitement whenever he phoned his supplier to buy shabu. But as soon as he took the drug, the rush ended and from there everything went downhill.

The hope of every drug addict is that each high would be a different experience, but the high is always the same, he explains. The more he used shabu, the less pleasure he got from it. Gimo realized that in reality he was addicted to the anticipation of getting high.

Hope in Rehabilitation
“I see myself in all the residents of Bridges of Hope,” Gimo says, referring to the drug and alcohol rehabilitation facility where he is currently the senior program director. The residents, all recovering alcoholics and drug dependents, listen to Gimo because they see him as credible and sincere, a friend who has gone through the same challenges they are struggling with, a brother who knows how extremely difficult it is to break free from the powerful grip of addiction.

“Addiction is a progressive, chronic, relapsing brain disease without a cure,” says Gimo. He is thankful that so much more is now known about the science behind drug addiction, particularly how it alters the brain, making quitting hard even for those who want to.

Based on this new scientific knowledge, addiction experts have developed treatments that can help people recover from drug addiction and lead productive lives.

To treat drug, alcohol, and behavioral addictions, Bridges of Hope uses an eclectic, comprehensive approach called “Therapeutic Community.” The highly structured program allows residents to live together in a “community” inside the facility where they will feel safe to explore substance abuse triggers, discover coping mechanisms, and learn to cooperate and relate with other people without dependency issues.

Progress is measured based on the resident’s completion of established, results-oriented treatment goals, rather than a set number of months in treatment. Residents participate in group activities, therapy, counseling, seminars, lectures, workshops, meetings inside and outside the facility, regular exercise sessions, sports and recreation, and “responsibility chores”, among others. They also attend Bible study groups, Mass and receive family visits to enhance their recovery.

Sobriety
In rehabilitation parlance, “sobriety” means more than just abstaining from drugs or alcohol. Rather, sobriety is used to describe people who have achieved a balanced and successful life in recovery involving complete mental, physical, and spiritual health.

“Sobriety is a table that stands on four legs. Take away one leg and the table falls,” says Gimo, describing his personal philosophy that he teaches to Bridges of Hope residents. The first leg is the recovering drug dependent. “We must forgive and love ourselves, learn how to listen and be humble,” stresses Gimo. The second leg is a loving relationship with their family while the third leg is a strong relationship with their core group. “The fourth leg is God, without Whom overcoming drug addiction would be impossible,” says Gimo.

Faith Seeks Understanding
“I remember smoking shabu and crying at the same time, my tears falling on the shabu crystals I was smoking,” says Gimo. “I was crying because I wanted to stop smoking shabu but couldn’t  –  it was insanity.”

Gimo was raised as a Catholic. “But God wasn’t really in my heart, and I would only remember to pray whenever I was in trouble or needed something.” After relapsing several times and in the depths of despair while confined in a rehab facility, he began to doubt the existence of God. “If there really is a God, why did He allow me to become addicted to shabu, which has caused so much pain and suffering in my life? Maybe there is nothing beyond the physical world and we are all just animals.”

Fides quaerens intellectum (“Faith seeks understanding”), said St. Anselm of Canterbury. During a counseling session in the rehab facility, a priest told Gimo that God wants people to question their faith, so that God could show them the answer. He realized that God had already promised to save him, but he always chose to go back to his shabu addiction. Every time he relapsed, though, he always ended up in a rehab facility. Despite his weaknesses, God never gave up on him. “God’s answer was clear,” Gimo says. “I must spread His message of love and hope to other recovering drug dependents.”

Ask for Help
Gimo stresses that there is only one positive course of action for a person who has tried shabu and whose brain has become physiologically hooked on the potent stimulant.

“Think of your family and your future. If you don’t have children, think of yourself. Seek help to stop your addiction,” says Gimo. “Starting from the lowest level of recovery is nothing to be ashamed of, and God is there to help you. As our body heals, so does our life. We just have to make the right decision.”

Apart from drug dependents, the people who bear the heaviest burden of addiction are their families. “The family must realize that their loved one is not the enemy; the real adversary is unseen and powerful, a complex brain disease that is addiction,” says Gimo. The drug dependent will often send subtle signals to reach out and seek help, he explains, and their family must be alert for these signs.
“Their loved one is sick and tired of what he or she has become. With their family’s support, a drug dependent can be saved. Let’s help one another while there’s still time.”

Take A Book, Return A Book

An American organization is encouraging the culture of reading in the Philippines through books, literacy initiatives and most of all, pocket libraries. What makes the little libraries special is that…