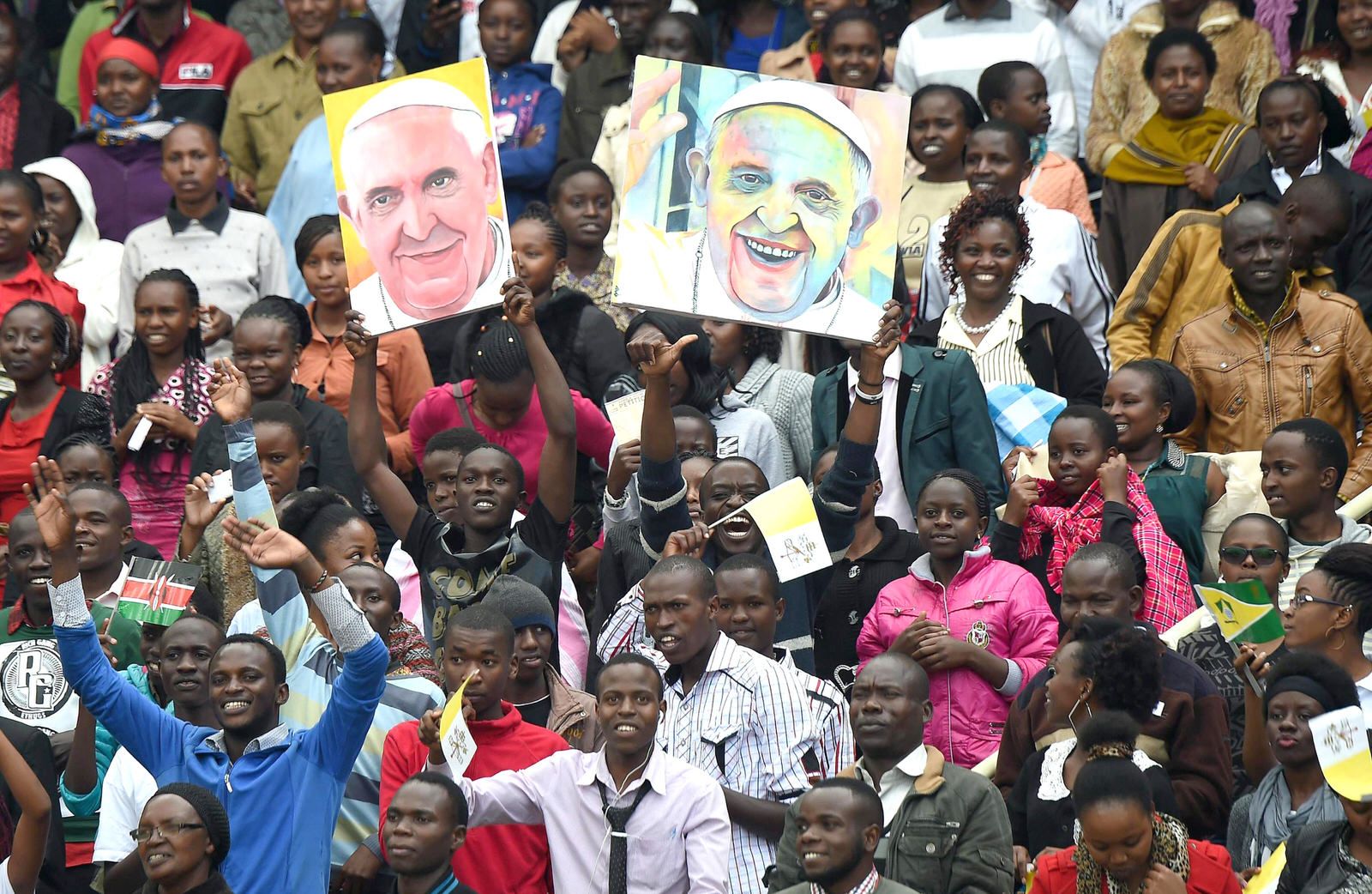 A papal visit to any country is always considered a blessing. But what took place on the eve of November 29, 2015 in Africa has become a unique event in the history of the Catholic Church. For the first time, a Holy Jubilee began in a place far away from Rome. When Pope Francis flung open the Holy Door of Bangui’s Immaculate Conception Cathedral in the Central African Republic, those present witnessed a sort of “world upside down.” It was the Pontiff himself who stated very clearly that the poor – those in the peripheries like Africa – are at the very center of God’s Kingdom. In effect, the Pontiff has given Africa – more importantly, its poor – the boost and the voice it needs to be noticed by the world.

Visiting the outskirts in Africa, an active war zone and a country where the population is living in a state of human despair, Pope Francis delivered a message of hope. By hailing Bangui, Central African Republic, as the “world’s spiritual capital” and by beginning the Year of Mercy there, he underlined a bigger point, one that the slowly changing composition of the College of Cardinals and the Synod of Bishops have been gradually reflecting. Summed up in one sentence, it can be said that what happened in Bangui shifted the center of gravity from North to South, with Africa playing a more important part in the global Church than any region since the days of St. Augustine in the twilight of the Roman Empire. If demography and faith, combined together, are God’s grace, as often claimed, the future of the Catholic Church is projected towards the peripheries of the global village.

There is no doubt that, in visiting the African continent, Pope Francis has drawn attention to Africa as a whole, its peoples, its promise, its struggles, and its achievements – a concrete way to give voice to the voiceless. He urged the crowds to be always concerned for the needs of the poor, and to “reject everything that leads to prejudice and discrimination, for these things, we know, are not of God.” Meeting with members of the country’s Muslim community at Bangui’s Koudoukou mosque, he said: “Christians and Muslims are brothers and sisters.” Calling on Christians and Muslims to recognize this and act accordingly, he said that we all know that recent acts of violence in Paris and other parts of the world have not been grounded in properly religious motives, and that “those who claim to believe in God must also be men and women of peace.” The Pope said his visit to Bangui “would not be complete if it did not include this encounter with the Muslim community. Together, we must say no to hatred, to revenge and to violence, particularly that violence which is perpetrated in the name of a religion or of God Himself.” “God is peace. Salaam,” he added, using the Arabic word for peace.

The conflict in the Central African Republic is generally perceived as a sectarian war between the Christian majority and Muslim minority. In fact, there are economic interests related to the presence of commodities such as vitally important resources like uranium, oil, diamonds and gold. This country could be heaven-on-earth and yet, in terms of development, it’s at the bottom of the pile compared to other countries in the region. Its resources are sold abroad. In its report, “Blood Timber,” British NGO Global Witness documented a worrying behind-the-scenes event in the serious conflict that broke out in the Central African Republic in 2012. It was revealed that some companies operating in the wood business financed various rebel factions – armed groups accused of war crimes – in order to obtain advantageous contracts and wood from these very militants. These companies belong to Belgian, French, German, Chinese and Lebanese entrepreneurs. The report also criticizes the European Union – which imports two thirds of the Central African wood – for insufficient oversight. Meanwhile, during these recent years, thousands of people have been killed, about 1 million people displaced and property looted and destroyed. Alleged human rights violations have included extrajudicial killings, disappearances, torture and endemic rape and sexual violence.

In this regard, at a prayer vigil on Sunday evening, soon after the opening of the Holy Door in Bangui, Pope Francis called on the country’s young people to follow a “path of resistance” in the face of war, hate and division. “To flee from challenges is never a solution. Resistance is needed in order to have the courage of fighting for good. One who escapes doesn’t have the courage to give life,” he said. Urging the young people to work for peace, the Pope added: “Peace is not a document that is signed and then put up some place. Peace is made each day. Peace is a craft, a handiwork.” The Pontiff touched upon many themes in Bangui, but there were some important hints running through his speeches, also in Kenya and Uganda, mapping out major themes of his teaching such as the environmental crisis, poverty and development, and social and religious divisions.

Ironically, despite the poverty experienced by its people, the countries of Africa are blessed with the bounty of nature. On the importance of safeguarding the environment and ensuring a just distribution of the earth’s wealth, the Holy Father addressed directors and staff of the United Nations Offices in the Kenyan capital. The Pope said Africa offers the world beauty and natural richness which inspire praise of the Creator. This patrimony of Africa and of all mankind, he said, “is constantly exposed to the risk of destruction caused by human selfishness of every type and by the abuse of situations of poverty and exclusion.” In the context of economic relationships between States and between peoples, he explained that “we cannot be silent about forms of illegal trafficking which arise in situations of poverty and, in turn, lead to greater poverty and exclusion. Illegal trade in diamonds and precious stones, rare metals or those of great strategic value, wood, biological material and animal products, such as ivory trafficking and the related killing of elephants, fuels political instability, organized crime and terrorism.” This situation, Pope Francis said, “is a cry rising up from humanity and the Earth itself, one which needs to be heard by the international community.”

During the Mass at the Uganda Martyr’s Shrine in Namugongo, near Kampala, he recalled with gratitude the sacrifice of those witnesses killed between 1885 and 1887, whose love for Christ and His Church has truly gone “to the end of the earth.” While celebrating an open-air Mass at the shrine, Pope Francis said “the legacy of the martyrs is not only served by occasional remembrance (June 3), or by being enshrined in a museum as a precious jewel.” He also called for unity among the Christians, as a gift from the Holy Spirit. Referring again to the martyrs, Pope Francis urged people to become modern-day missionaries “to our families and friends certainly, but also to those whom we do not know, especially those who might be unfriendly, even hostile, to us.” He also urged the Church in Uganda to “assist young couples to prepare for marriage, to encourage couples to live the marital bond in love and fidelity, and to assist parents in their duty as the first teachers of the faith for their children.”

Speaking later to young people in an unscripted address at Kampala’s Kololo airstrip, he encouraged them to use prayer so as to allow Jesus to transform negative experiences in their lives. “If I transform the negative into positive, I am triumphant,” he said, “but this can only be done with the grace of Jesus.” This is, indeed, a great challenge if we consider that young Africans represent 60% of the population under 25 years old at the continental level; an interesting fact that offers hope looking into the future.

Two thousand years ago, Pliny the Elder said: Ex Africa semper aliquid novi (There’s always something new coming out of Africa). This was realized recently when Pope Francis witnessed a fully alive and active African civil society. For example, in Nairobi, there is the Institute of Social Ministry, at the Tangaza College, where a doctoral course in business administration, with a specialization in entrepreneurship and social management, is offered. The aim is to instill in entrepreneurs the values of a new entrepreneurial culture, as suggested in Benedict XVI’s Caritas in veritate encyclical. Undoubtedly, in the relationships between the North and South, particularly between Europe and Africa, the greatest challenge, even before social, political, or economic challenges, is a cultural one. There are certain prejudices about the Africas which were inherited from the colonial era that continue to persist and have conditioned the collective mind-set at a worldwide level. It is as if Africa is a separate reality, light years away from the rest of the world; a conquerable land made of savannas, deserts and rain forests, whose people, for mysterious ancestral reasons, are instinctively averse to the rational mind and scientific thought. And it is with this mindset where the usual stereotypes are found – atrocities, wars, famines, pandemics, and permanent instability. Instead, contrary to the tear-jerking information usually provided, Africa is not poor, it has been impoverished. We are not at the bedside of a patient in intensive therapy. Those who truly love Africa are able to see not only the immense riches of its natural resources, but also the resilient people and ethnic groups which, more than ever, are thriving throughout the lands.

This is why the Pope said that his pilgrimage in the African lands was meant to draw attention to the continent as a whole, as a continent of hope, with abundant natural resources, and blessings in its people. “I pray that you, and all the beloved Ugandan people, will always prove worthy of the values which have shaped the soul of your nation,” he said in Kampala.

This is a prayer that could be extended to the entire black continent.

The God of Mercy

God is not a rival but rather an ally of the human race. God is a Father who gives Himself and is always ready to forgive and even finds joy in forgiving freely. We cannot pay for God’s gifts because…

Happy for Being a Missionary

On the occasion of the golden jubilee of my priestly ordination (June 28, 1968), I am happy with my priesthood and with my missionary life. I thank God for all the gifts he has bestowed on me, for…