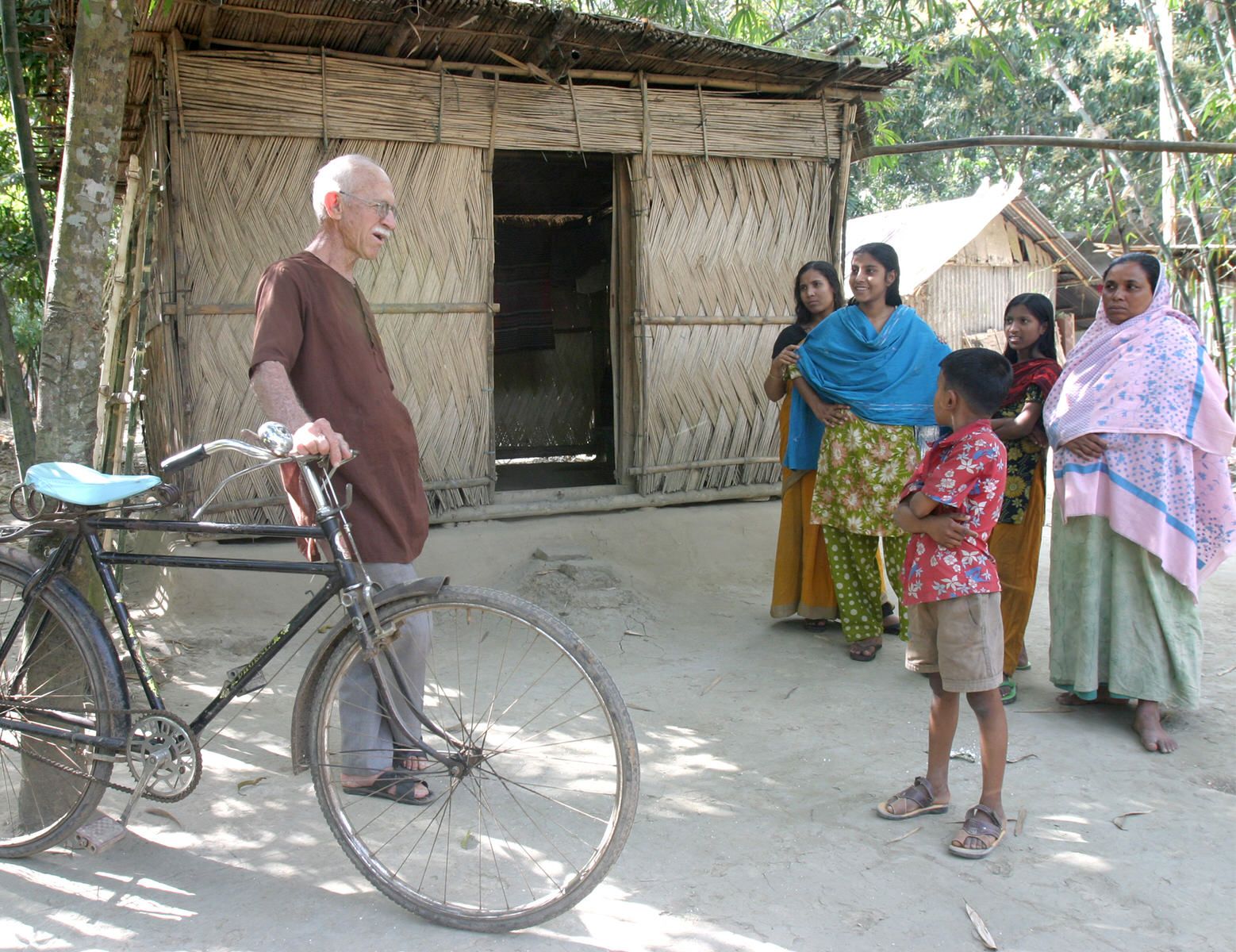 One family with non-Christians

The peace of Allah be upon you, my brother!” shouted a passenger to me in a noisy motorized rickshaw as it passed. Whenever I cycle outside Hobiganj, town men acknowledge me. However, this was not the case thirty months ago when I first arrived in this district. Back then, there was suspicion because I claimed to be a Christian missionary. Such persons are presumed to work solely for Muslims’ conversion from Islam to Christianity. As months passed and I accompanied more parents, with their children, to hospitals for treatment, trust grew. Now, with the remaining half year I will be spending among them, there is affection for this missionary. Indeed, the peace of Allah is upon me.

There are many more persons here whom I could help, so why should I move to another town or district? I simply wish to continue making signs of brotherhood to Muslims and Hindus, just as I have done in the previous eleven towns and districts. The life of service to the sick-poor and the simplicity of lifestyle of a missionary speak volumes to those among whom I dwell: “We are one human family.” Besides that, if I were to remain beyond three years, some people, whose suspicions of my motives never ceased, will have greater reason to suspect I am merely bidding my time and will, eventually, attempt to entice Muslims to abandon Islam for Christianity. To other towns, therefore, I must go.

Has this approach to mission accomplished anything? A lot of children have been helped, that is, kids having cerebral palsy, contractures from burns, cleft lips and palates, and more. Meanwhile, I have gained collaborators and edifiers.

Every Monday, during the early morning, I meet Mamoon at the Taj Restaurant for hot bread and lentils. It is my way of showing appreciation for Mamoon’s ongoing involvement in the works of mercy. By cellphone, he helps me communicate with villagers who wish to see me. Sometimes, villagers speak so excitedly that I cannot understand them. Mamoon intervenes to get the information I need. Recently, he purchased a used bicycle so he, too, can enjoy good health. Last Christmas Day, he was delighted to be with me at the jail where I was privileged to shake hands with 800 prisoners while giving them each an orange. Mamoon is not my follower. We are brothers in service to the poor, Muslim and Christian collaborators.

In muddy Kashipur, I needed to make a telephone call. Having no cell phone of my own, I requested the use of Jahangir’s phone as we sat together in the village tea stall. Quickly, he agreed, for he knew I had come to his remote village for the purpose of aiding disabled, deformed, and diseased children. Jahangir was deeply pleased to cooperate in a work of mercy, for the Merciful One blesses the merciful.

A motorcyclist, named Mukti, overtook me on the street and told me he wished to speak with me. He recommended a disabled child to me. Standing beside my bicycle, I wrote the child’s name and address on a slip of paper – my customary messy file of “persons-to-be-seen.” “When will you visit the child?” Multi asked me. “Allah alone knows,” I replied, “but it will be soon, God willing.” Men and women, even complete strangers, feel blessed when they guide my steps to persons in need.

Shuab’s only son needed surgery. His wife was not in favor of him going with me, but Shuab prevailed. Together, we travelled five hours by bus to Dhaka where the child was operated on successfully. Since then, the slight, energetic peddler of fresh cow’s milk has introduced me to others whose children need treatment. Shuab allays parents’ distrust of me and quietly assures them my purpose pleases Allah. He and I do the same thing: share, what the Creator gives us, with the poor.

At a meeting of priests, I was asked: “What is the reaction of Muslims to your work and your presence among them?” I mentioned only one fact. A significant number of high school and college youth wish to speak with me. Some state frankly: “I want to do what you are doing.” I urge them to retain their insight into the happiness our service yields. They have no problem perceiving that the good works and the lifestyle they see are because Jesus is my model in life.

Before she reached 1-1/2 years of age, Niha was already being catechized by her mother, Jasna. Niha repeated the words as well as she could. Her three older brothers, especially Rayhan, 14, supplemented the mother’s lessons. Rayhan patiently, but firmly, demanded Niha’s correct pronunciation of every word meaning “There is no god but God.” Within a few months, that central teaching of Islam will be, ineradicably, a part of Niha. This is catechizing at its best: learning from one’s own family to remember the Creator.

Acquaintances from Dhaka came to visit me. I had assured Jasna, mother of the family from whom I rent a room, it would not be necessary for her to offer them a snack. Nevertheless, she spread a tablecloth and laid on it biscuits, cakes, bananas, a spicy mix, and mango juice. After the guests had gone, I tried to convince Jasna to accept some money to defray her expenses. Cheerfully, but resolutely, she pushed away my money-bearing hand, saying: “I did it because hospitality is my religion.” I can believe that.

The Doctor of God

The Italian Comboni Missionary, Fr. Giuseppe Ambrosoli, will be beatified in Kalongo, Uganda, on 22 November 2020. For more than 30 years, he dedicated his life to helping the people, expanding a…