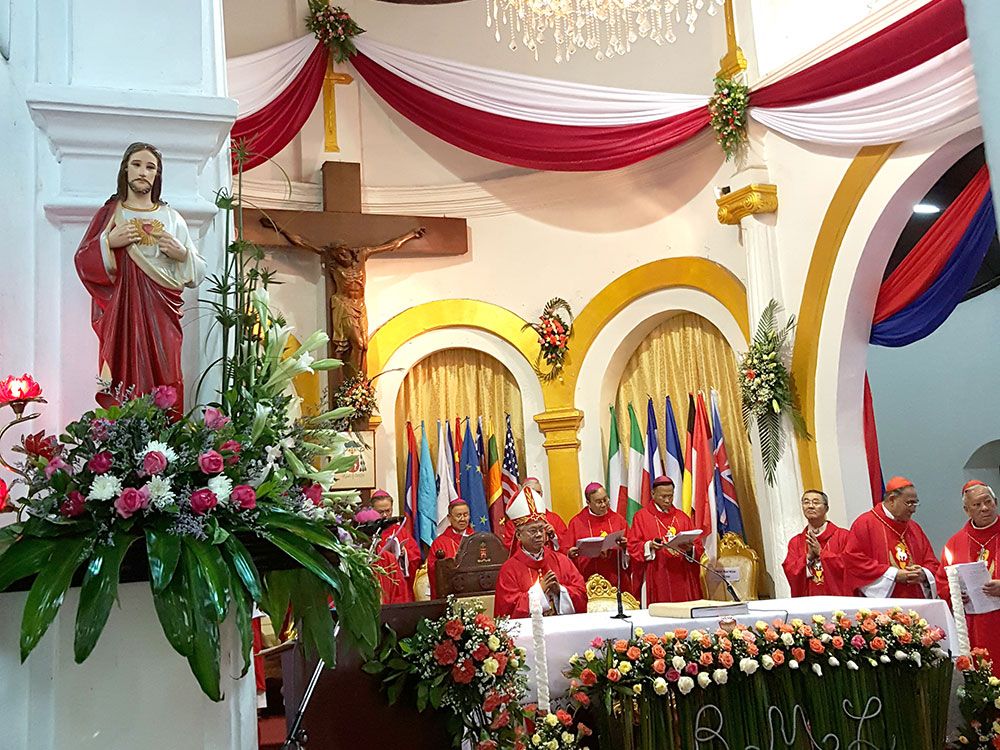 The beatification of 17 new martyrs, in the Laotian capital, was a historic event for a tiny minority Church in a country ruled by a communist regime. For the good of the people of Laos, Church authorities affirmed their willingness to cooperate with the civil authorities.

"Be strong, stay firm !” boldly repeated Cardinal Orlando Quevedo, the Special Envoy of Pope Francis, in a loud voice, at the historic beatification ceremony of new martyrs of Laos, killed in odium fidei (hatred of the faith) by the communist Pathet Lao guerrillas between 1954 and 1970, last December 2016 in the capital Vientiane.

“This is a day of love of the 17 martyrs, a day of joy for all the people in Laos, a day of blessing for peaceful and harmonious relationship among all the Laotian citizens,” said the Filipino Archbishop of Cotabato in his homily, addressing his message not only to Christians but also to all the citizens of Laos.

It was the first time a communist government of a country allowed a religious ceremony for the beatification of Christian martyrs to take place. Communist government authorities attended the celebration and exchanged messages of mutual respect, understanding and collaboration with the bishops and the apostolic nuncio.

The huge crowd of the faithful who participated in the well-organized event went beyond all expectations of the local Church. The peaceful and joyful atmosphere surrounding the whole celebration eased the initial fears of the official authorities who, at first, had authorized a “limited” celebration.

Cardinals, bishops, priests, nuns and lay people from neighboring countries, especially Vietnam, and also from Europe (France and Italy) joined in the historic ritual of beatification, the greatest event in the history of the Church in Laos. Also present were the bishops who suffered in prison and re-education camps, as well as missionaries who survived the persecutions and expulsions of all the foreign priests in 1975. Relatives of some of the martyrs also took part in the celebration.

Cardinal Quevedo exhorted the “little flock” to be faithful to Christ and to His Gospel as “light and salt” in the midst of the Laotian society. The Cardinal, who presided over the beatification on the Pope’s behalf, said the Church in Laos would celebrate the feast day of the martyrs every year on December 16.

In his decree for the beatification of the Laotian martyrs, Pope Francis mentioned Fr. Joseph Thao Tien, the first local priest and the first Laotian martyr, killed in 1954. The Pope also named the five laymen catechists, and finally, the 11 martyrs: five priests of the Paris Foreign Missions Society (MEP), and six missionaries of the Oblates of Mary Immaculate (OMI) – all of them “witnesses of the faith.”

French missionaries (MEP) arrived in Laos at the end of the 18th century to start their evangelization, followed in 1935 by a group of French missionaries (OMI) and in 1957 by the first Italian OMI. A short presentation of some of them revealed the terrible and glorious history of the Church in Laos, “the country of a thousand elephants.”

Ever since, Christians in Laos have been pronouncing the name of “Father Tiên” with respect and devotion. Blessed Joseph Thao Tiên (1918-1954) received his formation in Vietnam, first as a catechist in Thanh Hoa, then in the seminaries of Hanoi and Saigon. After his priestly ordination in Hanoi (1949), Fr. Joseph returned to Laos, to Sam Neua Parish, living an austere life.

With the outbreak of the communist insurgence, Fr. Tiên remained in his mission “ready to give my life for my Laotian brothers.” In the Easter of 1954, he was arrested, submitted to ‘people’s judgment,’ imprisoned and sent to a re-education camp. Isolated, he rejected all proposals against his faith and priestly celibacy, until the moment he was killed.

Blessed Mario Borzaga, an Italian OMI from Trent, arrived in Laos the same year of his priestly ordination (1957). He was young but already prepared for his hard mission. “I need deep faith and love, otherwise I cannot become a martyr,” he wrote. He worked in the formation of catechists, visiting families, curing sick people. On April 25, 1960, Fr. Mario undertook a two-week journey to visit a faraway village in the forest, accompanied by a young hmong (a member of a mountain-dwelling people) catechist, Paul Thoj Xyooj. It was a journey without return! Some witnesses confirmed the death of the two missionaries by the communist Pathet Lao and reported that the last words of the catechist Paul was, “I remain here. If you kill him, kill me too.”

Blessed John Baptist Malo, a French missionary (MEP) expelled from China, arrived in Laos in 1951. Soon after, he and some other missionaries were ambushed and transferred to a re-education camp in Vietnam. Fr. Malo could not survive the forced march; he died of exhaustion.

Blessed Noël Tenaud, also a French missionary (MEP), came from Thailand. He was assigned to a region near the Vietnamese border for the work of first evangelization. Accompanied by his faithful catechist, Blessed Joseph Outhay, he visited many villages. In April 1961, on their way back from an apostolic trip, they were ambushed by Vietnamese troops – were arrested and executed “because of their missionary activity.” The catechist Joseph Outhay, the 10th son of a catechist, just got married but soon became a widower. He volunteered to serve full time as a diocesan catechist for the training of young catechists, accompanying Fr. Noël until that last missionary trip.

Blessed John Wauthier, a French OMI, of strong body and character, did his military service in northern Africa as a parachute officer. Ordained as a priest in 1952, he arrived in Laos that same year. During the years of war and guerrilla, Fr. John accompanied villagers in their displacements, helping them with his medical, technical and linguistic skills. After a three-year service as an educator in a seminary, he returned to his refugees, evangelizing and caring for the poorest and the new Christians. One of the catechists wrote to Fr. John’s family in France after he was killed: “Fr. John died because he loved us and did not abandon us.”

The supply of deadly military weapons is the reason for the continuation of wars that result in atrocious suffering for civilian populations. Civil society groups have to exert more pressure so that…