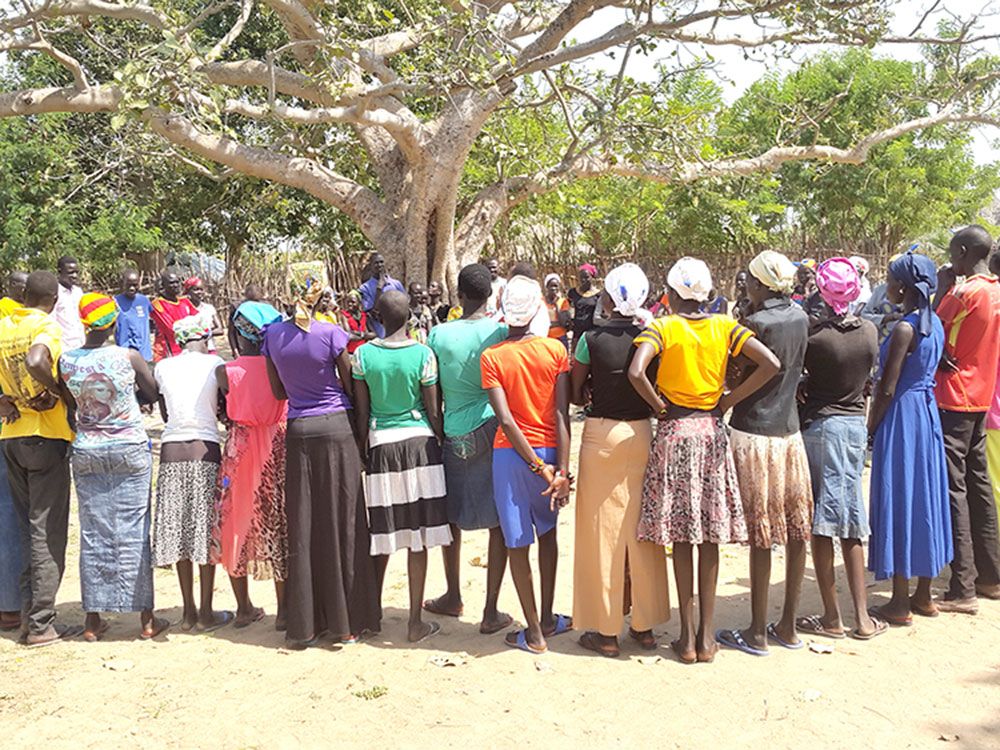 The current three-year-old conflict in South Sudan has forced more than 2.3 million people to flee their homes. These war-affected populations also need psycho-social and spiritual help to mitigate the effects of war traumas and to enable them to move on with their lives.

Fr. Yacob Solomon is a Comboni missionary who has been evangelizing, together with other missionaries, in a far remote area of South Sudan. Every day, they welcome dozens of displaced people who are fleeing conflict in other areas of their parish. They are men, women and children who have lost their cattle and other belongings, and even family members, and have been forced by recent violence to flee their homes taking only the clothes they had on. They look desperately for safety, food and shelter and have become a huge population of traumatized people. Providing relief to them at this stage is crucial to help them move forward.

Psycho-social and spiritual support to war-affected communities is part of the church ministry and Fr. Yacob Solomon has been engaged in trauma-healing activities in recent years, especially among young people.

Fr. Solomon said that “some of the youth, who used to be social and friendly, prefer to be on their own. They react badly to anyone who dares to disturb their lonely state. Some have chosen to engage in untimed marriage and just a few months later asked for divorce. They seem to have no sense of direction.” All this indicates the deep level of trauma people are enduring.

Working as a young missionary among a war-traumatized community, with a massive presence of youth, inspired Fr. Solomon to help them by offering some psycho-social and spiritual support. He went on and organized some trauma-healing activities, including the training of grassroots church leaders to help their communities.

Recently, Fr. Solomon conducted a three-day trauma-healing training which involved directly over 200 people. The aim was to empower grassroots church leaders to help their communities deal with the effects of traumas by applying a simple and holistic approach.

Trauma-healing sessions comprised trauma-release exercises intertwined with moments of prayers and teaching about the gospel values of compassion and mercy, forgiveness, reconciliation, peace, unity and healing.

“These activities are helping people to learn how to deal with their traumas and to overcome their traumatic situations. It is also a unique opportunity to learn how to let go of the painful past and make a new beginning,” added the missionary priest.

The three-day trauma-healing program began with the formation of a team which is comprised of ten members. They made plans to reach out more people in different communities, including trauma-healing activities for children. “We gathered 124 children and had a one-day trauma-healing program for them. We used drama and also involved some of the teachers. It was concluded with a song, composed by one of the facilitators, which calls for unity and forgiveness,” Fr. Solomon said.

Besides this, a four-day trauma healing program was organized for 68 young people. They have learned what trauma is, its causes, symptoms, consequences and how to deal with post-traumatic stress disorders. They drew insights from the healing ministry of Jesus and used a healing and recovery holistic process that involves integration of body, mind, spirit and emotions.

The groups also made use of some Bible quotations with a message of hope to give more support to those who are feeling hopeless and unable to deal with their traumatic situation.

Fr. Yacob Solomon is one of the many missionaries, men and women, spread across South Sudan who have set home among war-displaced communities and remain close to them despite the harsh and insecure environment. Such brave evangelizers become a sign of hope for the tens of thousands of often forgotten victims of war and conflicts in the world’s youngest nation.

Tom Catena is an American doctor. He practices his profession in a particularly difficult area of Sudan–more precisely in the Nuba Mountains. Out of nowhere, he has opened a hospital and everyday he…