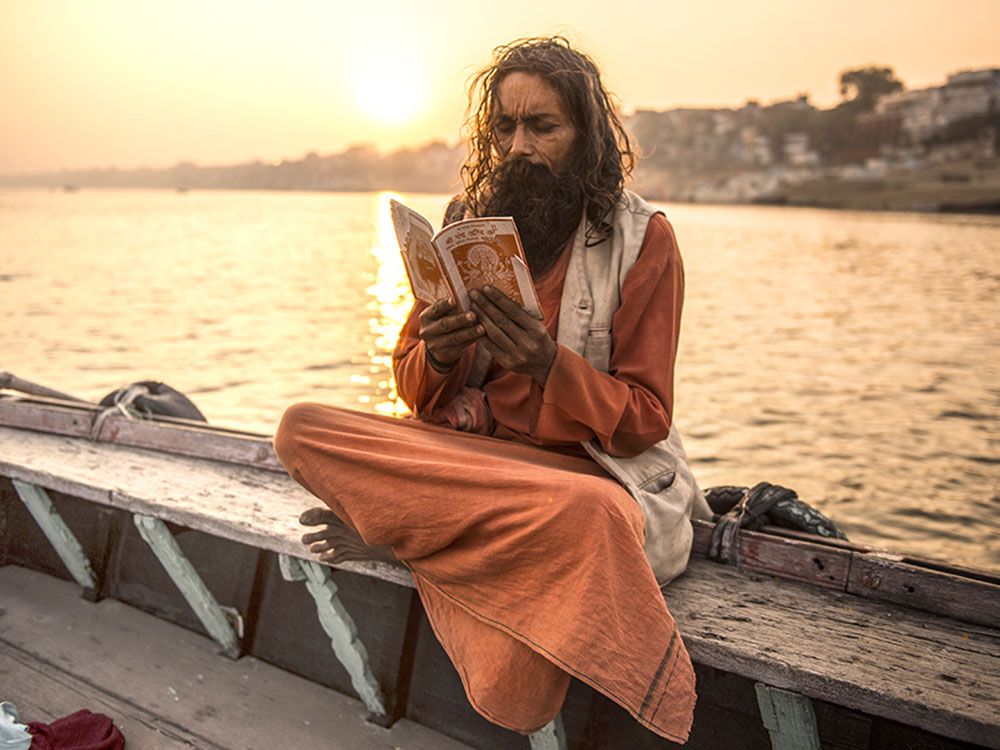 A quest for depth

Nearly all major religions of the world were born in Asia. A brief study of some common traits of Asian spirituality – inner journey, search for depth, silence, detachment, nonviolence, honesty – shows their significance in modern times.

An inward pilgrimage is central to Asian understanding of religion. Spirituality is the removal of all obstacles on this journey to arrive at one’s true self, the purification of the inner being in this process, and seeing it in relationship with the Universal Self. According to the Upanishads, inner liberation comes from withdrawal and reflection on the deeper nature of things. ‘Sitting in forgetfulness’ is considered most helpful for attaining the highest state of perfection, Nirvana. The Taoist thought in Chinese tradition also identifies religious quest as the liberation of the spiritual element of the ego from its physical limitations in order to move on to immortality. The danger of this form of spirituality is that it tends to neglect the social dimension, though correctives have been proposed in modern times.

There is no exaggeration in saying that Asians esteem depth and respect persons who are deep. Possibly, Mahatma Gandhi was such a person, as well as St. Mother Teresa, St. John Paul II and other persons of deep convictions and profound commitment. No wonder an evangelizer who has no personal depth fails to make an impact on Asian society.

For Buddha, spirituality was an inner journey and removal of egoism, attachments, greed, hatred and illusions in order to be ‘enlightened’ and to get rid of sufferings. Diverse Asian traditions suggest diverse practical techniques for making progress in this long and painful pilgrimage: restraint, observance, right posture, breath-control, sense-withdrawal, meditation, and absorbed concentration. Even non-believers make use of these practices for self-improvement. These exercises are finding a way to the West as well.

The depth we are speaking of is about looking at life in all seriousness, in its objective reality: pains and their causes, gains and their limitations, problems and possibilities. It is about taking a holistic vision of things rather than be lost in immediate issues, e.g. remoter causes, long-term consequences, diverse perspectives, attention to other people’s concerns. It builds up in a religious person sturdy convictions and unshakable commitment. It provides inner stamina during trouble, ensures intelligent balance in success, and endows consistency and coherence on one’s being. It supplies great enduring capacity and sustaining power for long-term effort.

The search for depth in Asians makes them value silence. They have a conviction that an understanding of deeper truths can be gained only in silence and through careful self-discipline. Silence strengthens one’s spiritual depth, making it a more resurging resource than mere blank emptiness. In fact, silence leads to intense activity in the inner world. It equips one to delve into the unfathomable depths of Truth which are to be realized and lived out.

Religious life had its earliest origins in Asia and continues to thrive there, with vocations, activities, and services of every kind. People who live in contemplative isolation are not rare on the continent, whether on the mountaintop or on the side street. Even secularized persons in Asia would show deference to a contemplative community because they feel they provide a corrective to the secular society. The world-renouncer is not considered an odd person or a burden to society, but someone who makes a self-seeking society rethink its values.

For Asians, spiritual seriousness is expressed, most of all, in detachment. Even non-Christians readily understand the monastic model of poverty, celibacy and obedience as expressions of religious detachment. That is why Christian missionaries, who are true to these values, are greatly respected in Asian society. The world-renouncing tradition goes several millennia back in South Asian religious history. If this quality is missing in a religious person, something essential is missing in him in Asian understanding, no matter how competent he is in other respects.

Gandhi’s humble lifestyle and peasant’s attire gave him enormous moral authority and persuasive power among his people. He consciously added a social dimension to his spirituality of detachment, silence and depth. His renunciation and self-improvement efforts were for the benefit of his society; more concretely, for national freedom. He claimed that the Hindu holy book Bhagavadgita taught him how to bring absolute dedication to his work with perfect detachment from its fruit. Such an outlook provided him with energies to keep up a peaceful struggle for decades in spite of limited success, to withstand difficulties of every kind, and bring joy into the entire endeavor. His exposure to Christianity in England must have prompted him to add this social dimension to an ancient Indian value.

Undoubtedly, nonviolence remains at the heart of Asian spiritual tradition. It is not that Asians are less violent than others, but a longing for peace has clung to their hearts even in the most violent of times. Buddha developed his message of peace when invading Aryan tribes were pressing hard on indigenous communities, eliminating weaker groups, and doing violence to nature. Ahimsa, nonviolence, has remained an inspiring theme in Asia, among the followers of Jesus, the co-nationals of Buddha and the disciples of Lao Tse. Hence, the greater tragedy when this message is forgotten on the continent.

It was the genius of Mahatma Gandhi that brought the concept of nonviolence to the political field when he decided to fight the mightiest imperial power of the day in his own peaceful style. Nonviolence was, for him, not mere passivity or weakness, but a pointer to the strength of the spirit. It consists in showing respect for the opponent and all his legitimate interests while refusing to bend to unjust treatment. He developed the concept of “strong persuasion” by appealing to the conscience of the opponent in respectful protest and expressing non-acceptance in a gentle and courteous manner.

Ahimsa also excludes the use of violence in language, provocative statements, unfair criticism, insensitive remarks; even violent forms of protests against injustice, and indifference to suffering. All the more should it exclude abortion, euthanasia, sexual irresponsibility, self-weakening indulgence and any manner of experimenting with the human body that would damage a person’s dignity. Today, it needs to be extended to overtapping of natural resources, damage to environment, and competition that rises to merciless heights. Ahimsa would fully be in agreement with the concepts expressed in Laudato Si’, especially with regard to the ecology of the human person.

Truthfulness is considered the highest virtue among Asian peoples. There is an ancient Sanskrit saying, “The truth shall triumph.” However, honesty is probably the most forgotten spiritual value in public life. The tragedy in our times is that corrupt practices have risen to the world stage. No one can plead to be totally innocent. That is why all must join hands in order to wipe out this plague from society.

The Spirituality of Responsibility

A spirituality of responsibility reminds us that our fates are interlinked and that we all must be concerned for each other and develop sensitivity for each other: “To know the anguish of others is to feel that anguish as our own.”

Confucian propriety (li) and righteousness (yi) teach us to contribute to harmony and relationship. Confucian humanness (ren) proposes the golden rule of love. Thus, the Confucian message of social harmony and Taoist teaching of harmony with nature complete each other. It is an invitation to become fully human: calm, confident, trustworthy, open; with no fear, no guilt feeling. The Buddhist writing Dhammapada teaches one “to avoid all evil, cultivate good, and purify one’s mind.”

Learning from each other

The Tibetan Buddhist leader, Dalai Lama, remembers a discussion he had with Thomas Merton on how the great religions of the world could learn from each other’s spiritual traditions. In this era of rapid secularization, it has become all the more necessary. It is often in encountering others that we discover ourselves. Mahatma Gandhi admits the debt he owed to Tolstoy and Emerson who both reminded him that the concept of nonviolence was an Indian tradition. While people like Martin Luther King and Mandela looked to India to study the Gandhi model, Indians often look to America and South Africa to learn from experiences of promoters of the peace-model. We need to continuously learn from each other in an era when we are hastily discarding many of the values we inherited, e.g. community feeling, a sense of common belonging, family values, respect for elders and women, and modesty. It is time that we remind each other of our cherished traditions.

If we were to read the ‘signs of the times,’ we would develop a farsighted strategy to enter into a happy relationship with global Islam and other religious traditions in an intelligent and respectful manner. It will open doors to billions of people.

Our primary duty is to learn to live together in peace and harmony and collaborate in common ventures for the growth and development of societies we are together a part of, working in happy relationships, respecting differences; and not indulging in mutual contempt, violence, exaggerations and hasty generalizations.

The absence of God in public spaces in many parts of the world has made people believe that the age of faith is over. In a skeptical age, militant atheism receives a good deal of intellectual respect. However, the passion for the eternal remains in human hearts for there is an eagerness to look beyond sight and sound. Science itself was born out of this longing to transcend immediate appearances and understand the hidden reality (The Future of God by Deepak Chopra). Einstein wrote in 1930: “What I believe: to sense that, behind anything that can be experienced, there is something that our minds cannot grasp, whose beauty and sublimity reaches us only indirectly, this is religiousness.”

There is no instance of a society in human history without religion. But there have been periods of self-questioning in individual hearts and collective self-questioning in societies. Qoheleth wondered, “How can anyone know what is best for man in this short, useless life of his – a life that passes like a shadow?” (Ecclesiastes 6: 12). These were moments of serious religious search. The superficial can learn from Asian depth.

Indian religious scholars have found the experiences of Christian mystics extremely interesting. There, they find a common ground. South Asians understand religion as a continuous quest for the Ultimate Reality. One remembers Gandhi’s book, Experiments in Truth.

Buddhist expressions like ‘empty fullness’ sounds similar to Christian thoughts like the last becoming first, the poor becoming rich, strength being present in weakness, having everything when not having anything. Spiritual experiences, as they reach deeper, are full of paradoxes. They induce spontaneous humility.

Asian holistic understanding of spirituality demands of religious people not to be over-assertive and compels scientists not to be dismissive of what they do not know. Asians feel that spirituality must be brought to every field. When it is brought to politics, one understands democracy as not only capturing power but also serving the causes of justice and right. In the secular world, spirituality fosters dialogue, search, trust, mutual acceptance, tolerance, and respectful curiosity.

This leaves a door open for Jesus as well.