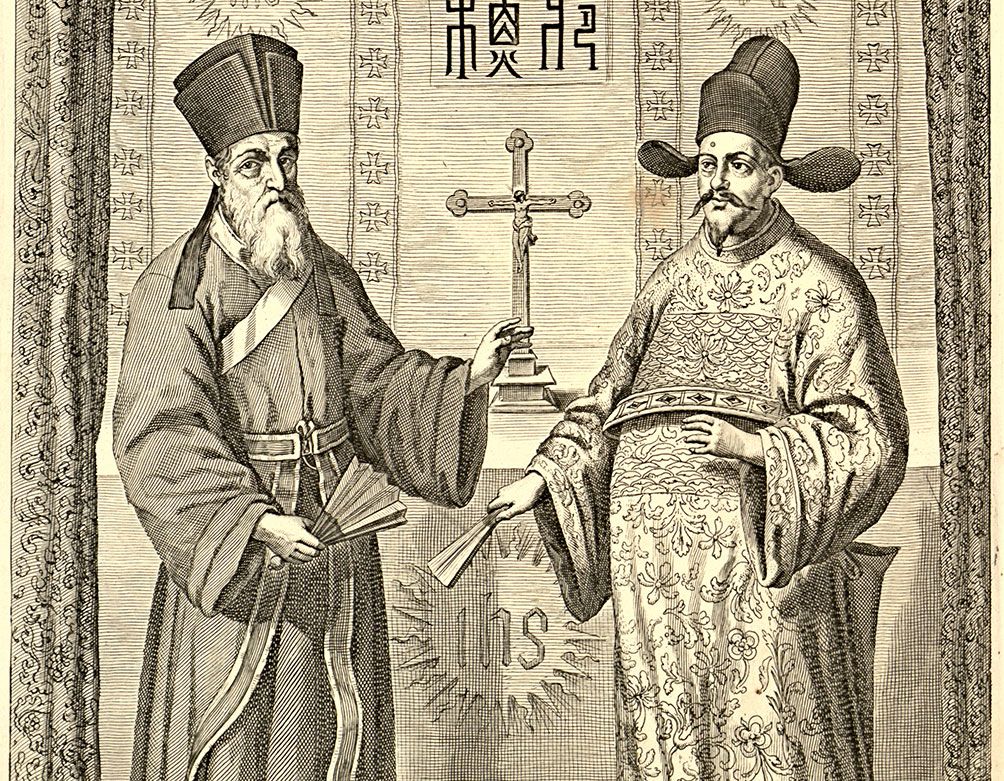 Catholicism in China was dogged by the Chinese Rites controversy for almost 400 years before it was finally resolved in the early 20th century. At the center of the debate was the compatibility of traditional Chinese practices with Christian doctrine. As with most disputes, the actual issues were colored by politics, in particular between rival factions within the Roman Catholic Church. The Jesuits, for example, saw no problem with certain Chinese rituals, which they believed were secular, while the Dominicans and Franciscans thought otherwise.

While the main issue was the Chinese tradition of ancestor worship, where descendants make ritual offerings to the dead and sometimes request their succor for blessings both spiritual and material, there were other points of debate.

These included Christian participation in the seasonal Confucian rites, inscribing the names of dead Christians on spiritual tablets that were placed in clan temples, and even the proper Chinese nomenclature for the Christian god (Catholics use tianzhu, or “lord of heaven,” while most Protestants use shangdi, an ancient Chinese reference to the supreme deity in the pantheon of Chinese gods, or simply shen, which means “god”).

When Jesuit missionaries first became active in China in the 17th century, the court was impressed by their scientific and technical know-how and allowed them to conduct their evangelist activities. In a 1692 edict, Emperor Kangxi of the Qing dynasty (1654-1722) wrote: “The Europeans are very quiet … let no one henceforth offer them any opposition.”

On the other side of the world, however, Rome decided to condemn Chinese rites and traditions in the early 18th century, deeming them incompatible with Christian teachings and forbidding Chinese Catholics to take part in them. The wording of the papal decree angered Emperor Kangxi so much that in 1721, he banned Christian missions in China.

In his announcement, he wrote: “Reading this proclamation, I have concluded that the Westerners are petty indeed. It is impossible to reason with them because they do not understand larger issues as we understand them in China. There is not a single Westerner versed in Chinese works, and their remarks are often incredible and ridiculous. To judge from this proclamation, their religion is no different from other small, bigoted sects of Buddhism or Taoism. I have never seen a document which contains so much nonsense. From now on, Westerners should not be allowed to preach in China to avoid further trouble.”

Anti-Christian policies were continued in varying levels of intensity by successive emperors. It was only in 1939 that the church, compelled perhaps by changing times, relaxed the proscription of Chinese rites, deeming them cultural and secular, rather than religious or superstitious, and thus permissible for Chinese Catholics.

After the founding of the People’s Republic in 1949, relations between China and the Holy See went sour. Two years later, Beijing and the Vatican severed diplomatic ties. Last September’s agreement may well be the beginning of a breakthrough.  Published in South China Morning Post

As societies around the world cope with the spread of Covid-19, pro-abortion activists in various continents, especially North America and Europe, have been trying to use the coronavirus pandemic to…

Passing On the Faith to the Young

The Catechism for Filipino Catholics (CFC) describes the Filipino faith as family-oriented. It is in the family that Filipinos draw their identity, strength, security and even their future. The young…