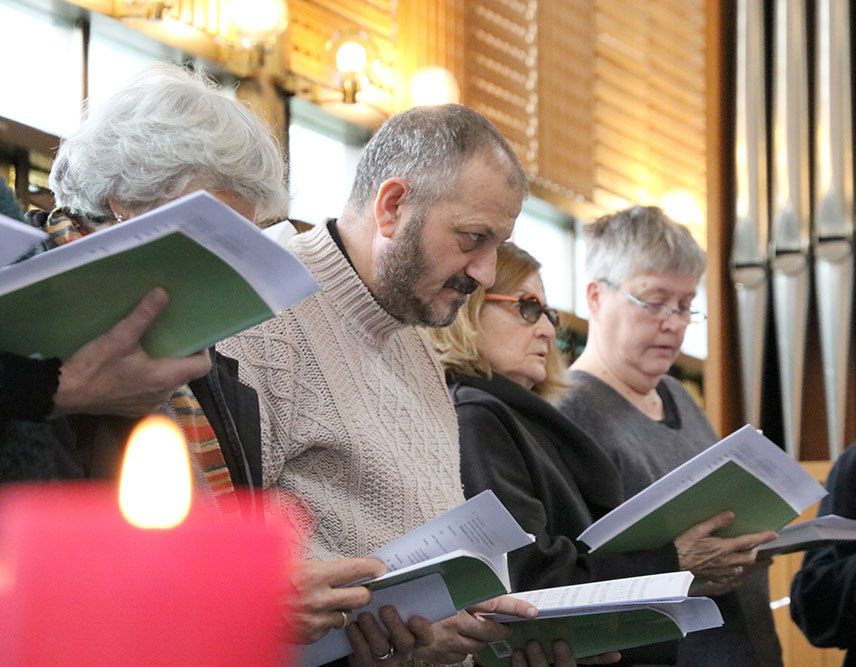 A Priest Held Hostage by ISIS

Father Jacques Mourad is a Syrian-Catholic priest. In 2015, he spent five months as a hostage of jihadist terrorists in Syria. He describes it as a spiritual experience and says it was praying the Rosary that gave him peace and strength.

Father Jacques moves slowly, supporting himself with a cane. His limp and slow pace anticipates his story. A bright smile lights up his face, the same smile he offered the ISIS terrorists who kept him prisoner for five months in Syria in 2015, before his daring escape. Father Jacques Mourad is a Syrian-Catholic monk and priest from the diocese of Homs in Syria, his native country.

He tells the story of his kidnapping in the book A Monk Held Hostage: A Jihadist Prisoner’s Struggle for Peace (published in Italy by Effatà), which he wrote together with journalist Amaury Guillem. Today he lives in Iraqi Kurdistan, in Suleymanya, in order to be close to the refugees coming from his country.

“I always carry with me the people I met during those months: prisoners, jihadists—they are all in my prayers and in my heart,” he tells us. “I believe that the merciful God always finds a way to help everyone, and even my jailers can encounter justice and receive the light of the Holy Spirit.”

Rather than remembering the days of violence, harassment, deprivation, psychological and physical torture, Father Jacques prefers to recount a miracle that took place on 31 August 2015. He was kidnapped on May 21 in the monastery of Mar Elian in Qaryatayn, where he was the parish priest.

After the first three months of imprisonment in Raqqa, he was transferred to a prison near Palmira, where he found two hundred and fifty Christians from his community. A group of jihadist leaders visited them. “These five men from ISIS took me to a small room and their leader read me a statement from the Caliph al Baghdadi, the leader of ISIS, addressed to the Christians of Qaryatayn. It was a long series of laws for us Christians living under the power of the Islamic State.”

Father Jacques learned with surprise that his community would be taken back to Qaryatayn. There, they would be in a sort of open-air prison and be subjected to a series of heavy prohibitions. However, they would be allowed to celebrate Holy Mass. “This news was an unexpected miracle for me,” he recalls with emotion. “I didn’t think I could go back to celebrating the Eucharist and receiving Communion. For me, it was a great gift of mercy from God. During the conversation with the jihadist leaders, Father Mourad tried to make sure his faithful would indeed return and be able to stay in their homes. He asked the terrorists why the Caliphate was taking them back to Qaryatayn.

“The jihadist chief told me it was because we Christians of this community had not taken up arms against the Muslims. It was an answer that struck me very much and made me understand many things. I understood above all, that those who decide not to practice violence can, by their choice, change the attitude of those who are used to taking up arms. We were saved thanks to our vocation as Christians, as witnesses of peace.”

Dialogue With Islam
It seems like a provocation to ask a Catholic monk, who has been kidnapped and tortured by Islamic terrorists, whether, after that experience, he still believes in dialogue with Muslims. But Father Jacques is a friend and spiritual disciple of Jesuit Father Paolo Dall ‘Oglio, who created the community of Mar Musa in the country precisely to promote inter-religious dialogue and peace.

Father Paolo was kidnapped in Syria in 2013 and has never been heard from since. For Father Mourad, he is always alive, because men of God, he says, are alive in God’s mercy. “Trusting in dialogue is a principle”, he insists. “It is not tied to the attitude of others. Moreover, we Syrian Christians have lived alongside Muslims for more than 1,400 years. We have a history of living life in common with them.”

Strength In The Rosary
There is no sign of recrimination in the peaceful gaze and in the careful words Father Jacques chooses to describe his ordeal. Despite the experience of jihadists holding a knife to his throat and demanding he convert to Islam, this Syrian-Catholic priest describes his imprisonment as an extraordinary opportunity for spiritual growth.

In the diary he kept during that time, he writes about the inner peace, energy and serenity that came from prayer. “I cannot forget the strength and courage that allowed me to look these jihadists in the eyes and transmit to them the love of Jesus. In those situations, God gave me the gift of a smile, something that put my jailers in difficulty. They wondered how it was possible for a prisoner to smile. I cannot explain where I got the strength to do so,” he says.

In those days filled with physical and mental suffering, Father Jacques found relief praying to Our Lady in particular. “As soon as I started praying the Rosary, every pain, every fear disappeared. Still today I pray the Rosary several times, according to formulas I invented during my kidnapping.”

During those long days of detention, when often he feared he was close to death, Father Mourad found consolation in the knowledge that the whole Church was praying for him. “During my imprisonment I felt the prayers of my friends, and they were of great support. I think the prayer of the whole Church was the ‘network’ that supported me in those months.”

Silence On The Plight Of Christians
Father Jacques’ concern for the fate of Syrian refugees is connected to his fears for a Middle East that is progressively emptying itself of its Christian population, while the world watches in silence. “It is not possible for the Middle East to live without Christians,” he affirms. “On a symbolic level, it is very dangerous because it is a situation that touches the roots of Christianity: the Church cannot grow and continue its history, without the Churches of the Middle East.”

The second is to break this silence on the flight of Christians from the Middle East. What is being done for the Christians of the Middle East is not enough. More important than giving them food and drink is restoring their dignity, offering them a life worth living.  And they still don’t have that.” Published in Vatican News