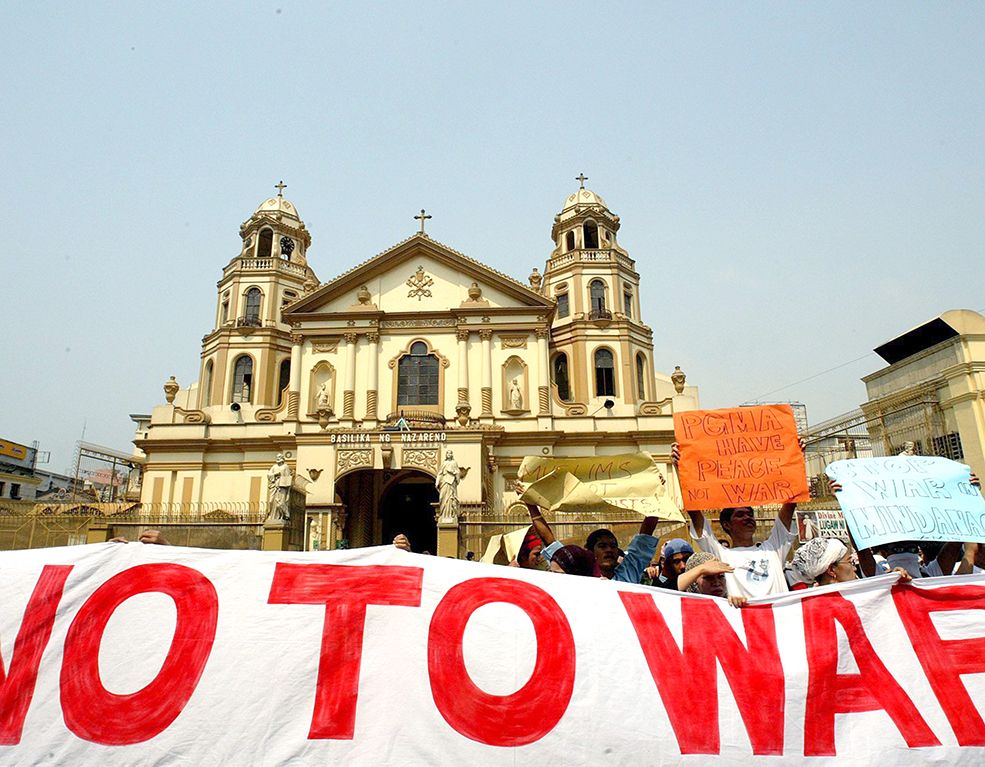 "We can no longer think of war as a solution because its risks will probably always be greater than its supposed benefits. In view of this, it is very difficult nowadays to invoke the rational criteria elaborated in earlier centuries to speak of the possibility of a ‘just war.’ Never again war!” Francis writes.

The pope notes that the Catechism of the Catholic Church speaks of the possibility of legitimate defense by means of military force, as long as “rigorous conditions of moral legitimacy” have been met, yet he warns it is “easy to fall into an overly broad interpretation of this potential right,” noting that in recent decades every war was presented by its instigators as a ‘just war.’

“While Francis does not repudiate in an absolute way the ‘just war’ theory in Fratelli Tutti, he does continue down a path that the church has been heading since the pontificate of John XXIII, and followed by all of his successors in one way or another,” said Daniel Cosacchi, the Director of the Justice and Peace Studies Program at Marywood University in Scranton, Pennsylvania.

Francis is laying out the ways to build peace throughout Fratelli Tutti, and the passages on ‘just war’ can’t be read in isolation, told Crux Dr. Maryann Cusimano Love, Associate Professor of International Relations in the Politics Department of The Catholic University of America in Washington. “He’s laying out how you do reconciliation and forgiveness,” she said

Peter Koritansky, Associate Professor of Philosophy and Religion at the University of Prince Edward Island, said it would be “problematic” to suggest that war was “intrinsically evil” in the Catholic tradition.

“To suggest that war is intrinsically evil would mean that God, in commanding the chosen people to take up arms, commanded them to commit intrinsically evil actions. Similarly, such a suggestion would be contrary to the teaching of the Church, which has clearly opted for a ‘just war’ doctrine over a pacifistic one,” he told Crux.

“For these reasons, I think it’s far preferable to say that the Holy Father’s remarks should be seen as reapplying the Church’s teaching due to changing circumstances rather than altering it, which is what the ‘intrinsic evil’ interpretation would constitute,” he added.

Koritansky said that on the face of it, the implication in Fratelli Tutti is that war is more difficult to justify morally in the contemporary world than it was in the past.

“But what precisely is it about the contemporary world that explains the added difficulty? One suggestion in the document is the advent of modern weaponry, especially nuclear and chemical weapons. If this is what he means, the point is well taken. The devastation caused by nuclear weapons drastically changes the calculation of whether to go to war,” he said.

St. Augustine
Footnote 242 of Fratelli Tutti says: “Saint Augustine, who forged a concept of ‘just war’ that we no longer uphold in our day, also said that ‘it is a higher glory still to stay war itself with a word than to slay men with the sword, and to procure or maintain peace by peace, not by war.’”

“This came as a shock to me,” said Cosacchi. “Saint Augustine is usually considered to be the ‘founder’ or ‘father’ of the ‘just war’ theory (along with his mentor, St. Ambrose). There are three essential parts to the Augustinian ‘just war’ theory: 1) War is a response to an unjust aggressor; 2) a competent authority declares the war; 3) Augustine is concerned with just conduct during the war itself,” he explained.

“Now, these three beliefs are really the foundation for so much that has come after Augustine in the Church’s ‘just war’ theory … So, obviously the church has moved past the same understanding of war that Augustine had in the 4th century, but they have built on his understanding rather than abrogated it. To say, as Pope Francis does, ‘that we no longer uphold’ … it makes this footnote pave the way more than anything else, to a situation where the church will eventually move beyond a ‘just war’ theory at all,” Cosacchi said.

However, Koritansky says it would be a mistake to suggest that Francis “is merely disposing” of Augustine’s ‘just war’ teaching. “One could interpret the Holy Father’s words in one of two ways: First, one could read them to mean that the very concept of a ‘just war’ is now something the Church rejects. Second, one could interpret him to mean that the concept of a ‘just war’, perfectly valid as a concept, is much more difficult to apply to today’s world.

Koritansky also has a complaint about the “ambiguity” in the pope’s statements on ‘just war’ in the document. One unclear issue is what would be considered a “war”. For instance, the pope speaks positively about the role of the United Nations in Fratelli Tutti. Would a UN peacekeeping operation or even a UN police action fall under the category?

“Such distinctions are very important. Peacekeeping, as nowadays understood by the international community, does not at all seem to be what Pope Francis has in mind in his condemnation of ‘war’,” Koritansky told Crux.

Others Are Less Convinced
Jesuit Father Drew Christiansen –a senior fellow at the Berkley Center for Religion, Peace, and World Affairs–told Crux that the first thing that grabbed him was that Francis said that although “in principle, you may support humanitarian intervention, even with military means, but in practice, it’s too often made of use for going to war.”

Cosacchi said it seems UN interventions “could be justified according to Francis, especially if it is based in nonviolence and does not incite further violence on the part of the engaged parties in the conflict.”

He noted that when the pope visited South Korea in 2014, he said it was “licit to stop an unjust aggressor,” but added: “I underline the verb: stop. I do not say bomb, make war, I say stop by some means. With what means can they be stopped? These have to be evaluated.”

Cosacchi pointed out the pope then said the UN is the place where such responses ought to be discussed. “That is definitely an approach that he would prefer in such difficult situations,” he said.

Death Penalty
In the 1995 encyclical Evangelium Vitae, John Paul said the use of the justifications for the use of the death penalty in modern society “are very rare, if not practically non-existent.” In 2018, Francis took this to the next level, changing the Catechism to say capital punishment is “inadmissible.”

“He explains basically three reasons to study these two items together: 1) They are extreme situations; 2) They are false answers that fail at what they were meant to do; 3) All they ever accomplish is making the spiral of violence worse,” Cosacchi added.

“In response to those hoping for theologically precise language, and especially the question as to whether war and the death penalty are ‘intrinsically evil,’ the Holy Father cautions us not to become ‘mired in theoretical discussions,’” Koritansky said.

Cosacchi said Francis is preparing the ground for his successor to make a more definitive judgment on the legitimacy of war. “Just as John Paul II did in 1995 by seriously limiting the cases in which the death penalty would be justified, Pope Francis has made a similar point here about justified warfare. However, just as it took a future pope (Francis) to declare the death penalty inadmissible, it does seem as though Francis is saying that a future pope would make the same claim about justified warfare,” he said.  Published in Crux

Many have said that the Philippine February 1986 revolution was bloodless with the Holy Rosary as the weapon. It was believed to have been guided by Our Lady Who Commands Soldiers and could even be…