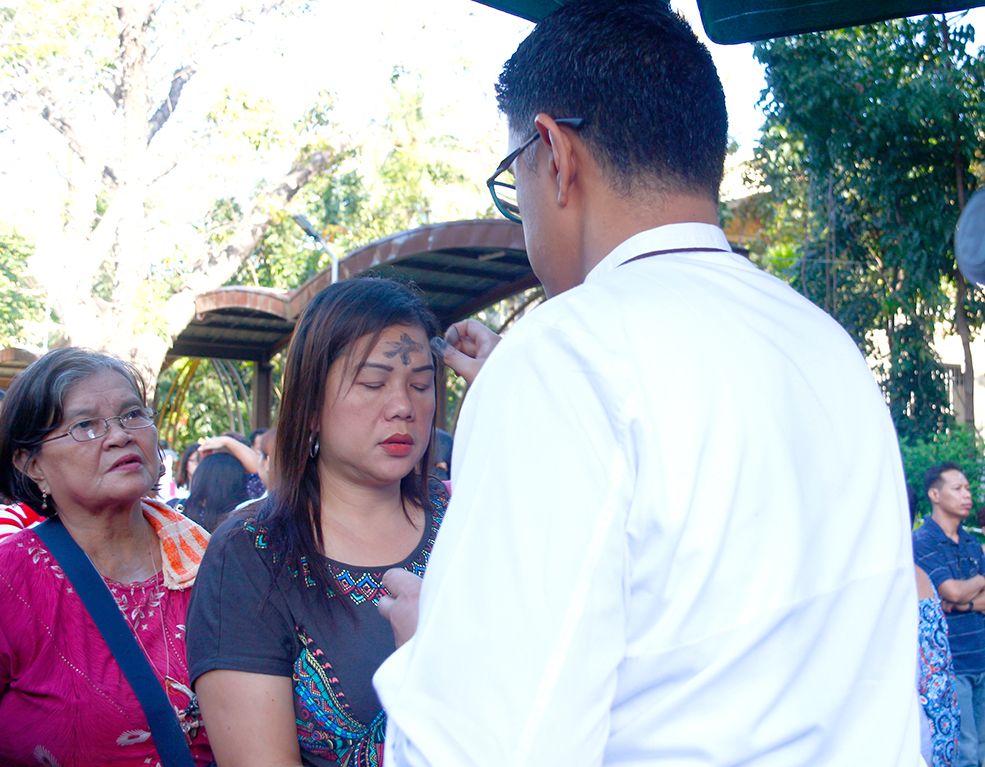 Remember You are Dust…

Smudging ash on a person’s forehead reminds us that humans are simply mortals. This ritual is performed on Ash Wednesday to signify the need for repentance at the beginning of the Lenten season.

In the Catholic calendar, Ash Wednesday is the beginning of the Lenten season. Forty days before Easter, it involves both abstinence and fasting. It is a reflection of the forty days and forty nights when Jesus was praying, fasting, and being tempted by the devil Satan at the Judaean desert. Those who commemorate Ash Wednesday do it as a sign of their repentance.

There are no Biblical texts that specifically speak of the day of Ash Wednesday.  Nobody really knows and can attest to what exactly happened on those forty days and forty nights between Jesus and Satan in the desert. We only know that there was a temptation. In the olden times, aside from the traditional ash, people wore sackcloth.

But nowadays, what is recognized is the long queue of people to have themselves “ashed” at churches. Fasting means not eating at all. Abstinence is to refrain from eating meat or other food that you normally crave for.

Food that a person abstains from may include their favorite food.  For example, if you like eating junk or fast food, on Ash Wednesday and every Friday and Good Friday of the Lenten season, you abstain from eating that.  To fast means to skip dinner or any meal of the day. No eating at all. Those who are sick, the elderly, and children are exempted.

New Ways Of Fasting
There are now new ways of fasting.  It does not only pertain to food-related fasting but also to non-food. For instance, a person is a notorious gamer and likes gaming. As a way to fast, he would not play games.  That would entail giving up an activity he likes doing, thus, avoiding tempting one’s self on what he does frequently. These traditions are also ways for an individual to do penance and to repent for his sins.  It is the little sacrifices that we make with the greatest sacrifice that our Lord and Savior, Jesus Christ, did to offer His own life to become the salvation that humankind needs.

Throughout the year, people go to confessional booths.  But it is during the Lenten Season that begins on Ash Wednesday when there are long lines of people to confess their sins to the priest.  It has become one of the ways that a person repents by acknowledging what their sins are and asking for forgiveness with prayers the priest instructs them to say as penance .

At home, after Palm Sunday, the tradition we observe is placing the palms on the windows of each room to ward off evil spirits. Then, the year after, when it is announced at Church that they are collecting the palms for Ash Wednesday, we gather the palms at home and give them to the parish. As per custom, the Church would ask the parishioners for their old palms. From the previous year’s Palm Sunday, the palms (leaves) are collected and assembled. This would then be converted to ashes to become the ashes placed on each churchgoer’s forehead for Ash Wednesday.

Throngs of people would also attend the Holy Mass on Ash Wednesday. Christians would go to Church and line up to have themselves crossed on the forehead with ash by the priests. One of the Holy Mass schedule on Ash Wednesday is at lunchtime. There are quite a good number of people who would miss their lunch break at work and would rather attend the Holy Mass and have themselves ashed. This religious practice is also done in the Anglican Church, and by Roman Catholics worldwide, Lutherans, Methodists, and Moravians.

Mysterious Happenings
There have been mysterious happenings on Ash Wednesday. In 2014, at County Cork and Galway City, Ireland, people had burning sensations after ash was placed on their foreheads. They found out after a laboratory analysis that the ash became caustic because the leaves were too dry and when they had put water on it, the mixture frothed and made a hissing sound.

Also in 2018, a similar situation happened in San Roque Cathedral, Caloocan City, Philippines, where parishioners experienced burns from the ash. People did not know what to believe.  They were in disbelief as to whether it’s a sign from the Heavens or not. After testing, the results revealed that there were high levels of acid causing the “overburning.” It was not a miraculous occurrence as perceived from the start but a coincidental composition of how the ashes were made.

Last year, right before the COVID-19 pandemic became catastrophic; the Catholic community slightly altered the traditional placing of the ash on the forehead to prevent the virus from spreading.  Instead, the priests sprinkled it on top of the head of the parishioner as they bowed.

Still, the message imparted on Ash Wednesday remains the same, whether sprinkling atop the head or crossed with ash on the forehead, as quoted in the Holy Bible in Genesis 3:19: “By the sweat of your face you shall eat bread, till you return to the ground, for out of it you were taken; for you are dust, and to dust you shall return.”

May we not forget that God is still the Supreme Almighty.  We are God’s children and the Ash Wednesday celebration is the loving Heavenly Father’s reminder of the origins of mankind.

In power for twelve years, Daniel Ortega rules without listening to the Nicaraguans. And the people got fed up and rebelled. The Sandinista leader is isolated and does not have many exits.