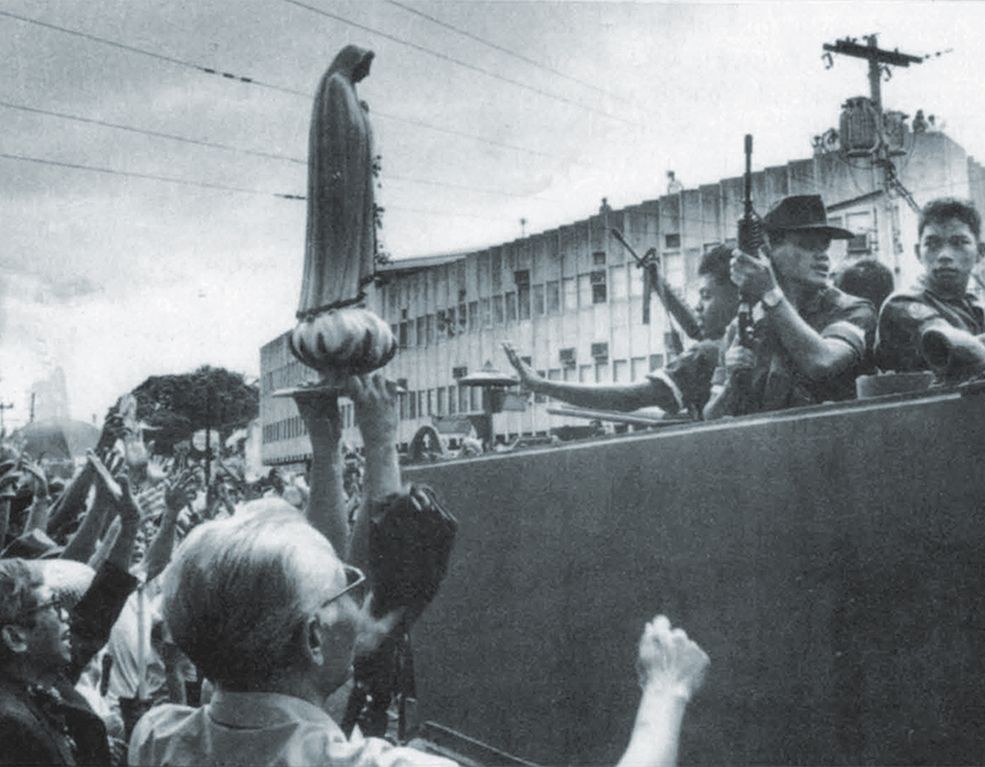 Many have said that the Philippine February 1986 revolution was bloodless with the Holy Rosary as the weapon. It was believed to have been guided by Our Lady Who Commands Soldiers and could even be better called a Marian Revolution.

It was a revolution like no other, in the collective memory of the Filipinos at that time. Metro Manila’s popular avenue, EDSA, was filled with tankers and people, most of whom were holding rosaries in front of military might.

I was one of those who occupied EDSA, together with neighbors from my subdivision in Parañaque, in the early evening of February 26, 1986. We walked beside military jeeps and tankers rolling beside us, soldiers staring at us, and us looking apprehensively, sometimes forcing a smile at them. Somehow, we were not afraid due to the thousands of people occupying the streets. We were not alone.

We ordinary citizens were out in the streets equipped only with water bottles and our rosaries.  There were no gunshots and shouting, only singing and praying. We had no guns or knives, only the rosary that we would lift and show to the soldiers.

We did not know it then, but we were taking part in a revolution, the EDSA Revolution or the People’s Power Revolution of 1986. But as later stories go, and in hindsight, it was, to be a rosary revolution. Why were we out there in the streets in the first place?

A Call To Prayerful Arms
In People Power, an eyewitness history of the Philippine Revolution of 1986, published by the James B. Reuter, S.J. Foundation and edited by Monina Allarey Mercado, the Philippines, which has been under the Martial Law totalitarian rule of President Ferdinand E. Marcos since 1972, was in crisis.

Marcos, who had been in power for almost twenty years, was being abandoned by two of his key supporters, his Minister of National Defense Juan Ponce Enrile, and Deputy Chief of Staff Lt. Gen. Fidel V. Ramos (who would later become President of the Philippines from 1992 till 1998).

They only had some 500 soldiers with them, vis-a-vis the might of Marcos’ military. Enrile had no recourse but to ask for help from the church hierarchy, led by Ricardo Cardinal Vidal, then president of the CBCP, and Jaime Cardinal Sin, Archbishop of Manila.

The book relates that after the Enrile-Ramos press conference where they declared their separation from Marcos and appealed for support, Cardinal Vidal released his statement: “I would like to appeal to the people not to use violence to solve our problems. If possible, let us not give each side a chance or an opportunity to use force. If possible, let us have a peaceful dialogue. If they want a mediator, they are free to choose anyone. I just hope that no Filipino blood will be spilled. So I appeal, once again, let us not use violence. Let us use a peaceful and orderly solution. If anyone should feel that I can be of some help to them as president of the Catholic Bishops’ Conference of the Philippines, I will be very willing to help for the sake of peace in our land.”

“Go Out Into The Streets!”
After consulting with Cardinal Vidal, then Manila Archbishop Jaime Cardinal Sin immediately called the contemplative sisters, Carmelites, Pink Sisters, and Poor Clares, to “go out from your cells and go to the chapel and pray with outstretched arms before the Blessed Sacrament. And fast until I tell you to stop. We are in a battle and, like Moses, you have to stretch out your arms.”

Next, Cardinal Sin called the Catholic radio station Radio Veritas, which was operating in hiding, and issued this statement, “I want you to pray because it is only through prayer that we can resolve this problem. I am deeply concerned about the situation of General Ramos and Minister Enrile. I am calling on our people to support our two good friends at the camp. Go to Camp Aguinaldo and show your solidarity with them in this crucial period. Our two good friends have shown their idealism. I would be very happy if you would help them. I wish that bloodshed will be avoided. Pray to Our Lady that we will be able to solve our problems peacefully.”

Cardinal Sin’s appeal for support was what we needed to hear and to go into action. Groups and neighbors like us, mobilized and prepared to march along the stretch of EDSA, where there were already tankers rumbling along the main roads. Others prepared food packs to distribute to the soldiers manning stations, no matter whose side they were on.

Since we lived near the airport, we sent food packs to the military personnel at the domestic and international terminals.

The Rosary Army
In the book The World of Marian Apparitions by Wincenty Laszewski, published in 2020 by Sophia Institute Press, the author calls the EDSA event the “Rosary revolution in Manila as directed by the Mother of God at the Epiphany of Saints Avenue (EDSA, which is actually an acronym for Epifanio De Los Santos)–the location of a miracle in the Philippines.” Laszewski calls Mary “The Lady Who Commands Soldiers.”

As one who was at EDSA, I could feel the power of the Holy Rosary, as we prayed the mysteries continuously.  We felt one, in solidarity for a peaceful resolution to the removal of a dictator. If the Marcos government has his military troops, we were the Rosary army.

Laszewski writes: “There were supposed to be bloody clashes, ground and air strikes, tanks, mortars, and rifles. Instead, there was joint prayer and peace. All thanks to the Mother of God, who answered the call of her Filipino children. She listened to their prayers and saved them, changing the hearts of those who were given orders to kill. From February 22 to 25, 1986, on the Epiphany of Saints Avenue in Manila, a revolution took place. Men and women holding rosaries in their hands marched along the eight-lane road encompassing the capital of the Philippines.

“It was a powerful force because the Holy Mother stood on the side of the Rosary army. She commanded the people to stop the government’s attack. The story of this ‘apparition’ reads like a thriller novel. As Cardinal Sin said: ‘The whole scenario of those events was written by God Himself….All the action was directed by the Blessed Virgin Mary.’”

In The Millions
At that time, we could only rely on word-of-mouth and the hidden Radio Veritas to tell what was happening around us. I did not know that our numbers in the streets were increasing, reaching up to more than two million at one time. There we were, alongside entire families, including young children, praying the rosary, singing Marian hymns, priests and bishops celebrating Holy Masses on makeshift altars as we, the people, begged the Holy Mother for help. I heard that what was happening, the peaceful ambiance was a miracle in itself. Some said they saw the Blessed Virgin even going around.

For four days and four nights, both sides stood facing each other. On one side were us, incessantly praying the rosary. On the other side were soldiers armed to the teeth remaining at their posts. Some soldiers even accepted water from some of us.

Rosaries Versus Tanks
According to Laszewski: “What was feared soon became a reality. The first six tanks appeared on the street. The officers realized they were coming upon a crowd of defenseless civilians. The engines rumbled, and the machines started moving toward the crowd. There were a total of twenty tanks and six thousand soldiers. Two million people, pale and trembling from fear, knelt facing the oncoming tanks. Nuns were kneeling in the first row. They raised their rosaries and began to pray loudly. The people had no intention of stepping back. Then the tanks withdrew. Not a single shot was fired. The army was defeated by the power of prayer.

“In the direction where one of the sisters was leading the Rosary, a tank was approaching with a lone soldier in the turret. The tank stopped before the kneeling crowd. The soldier watched with fascination and then said: ‘Sister, could you pray louder?’ When the nun nodded, the solder’s face beamed a bright smile. After a moment, the tank’s crew joined in and prayed.”

On the last day of the revolution, Corazon C. Aquino was chosen as president and the deposed President Marcos left the country for Hawaii.

As one who was part of this peaceful revolution, I can only say that all of us, soldiers and civilians alike, were touched by God’s immense grace, with the help of the Our Lady Who Commands Soldiers.

The Comboni Lay Missionary follows Christ going out of his/her comfort zone, travels light and accompanies people and communities. His or her gaze is fixed on the poor of whom St. Daniel Comboni…