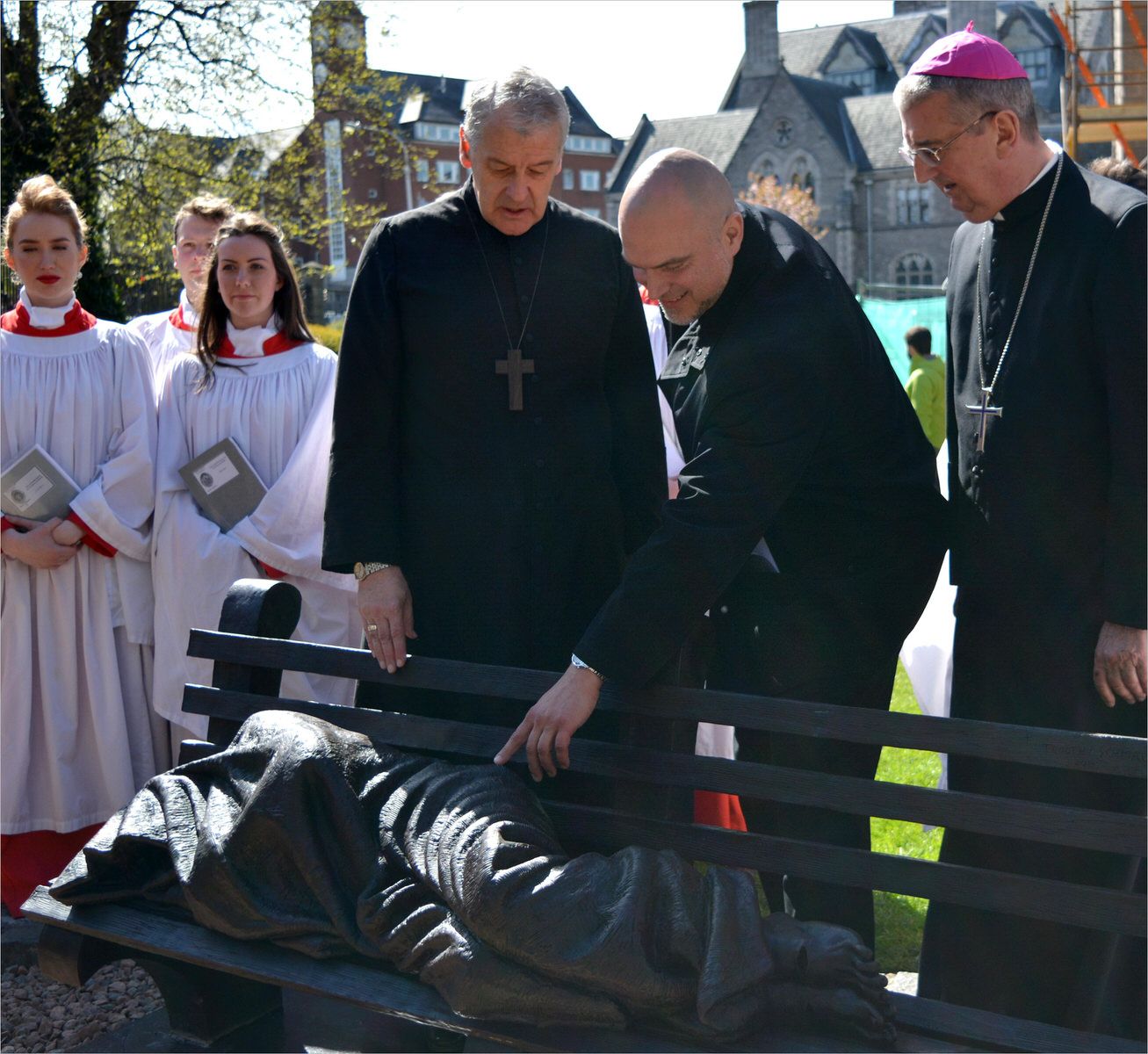 Visual reminders are necessary as they can stir people into action when statistics fail to find a listening ear. This is the effect Canadian artist Timothy Schmalz, who has become renowned for his “Homeless Jesus” sculptures, hopes art should impart to its perceivers. Commenting on the same statue which was installed in Dublin in May, Archbishop Diarmuid Martin said: “For the Christian, the homeless are not just statistics; our belief recalls that the plight of the homeless is our plight. This image of the “Homeless Jesus” reminds us of the demands of belief in Jesus Christ. It challenges us, before we feel we can enter the cathedral, if we have the right credentials to enter.”

In recent months, many tourists visiting one of Dublin’s premier attractions, the 11th-century Christ Church Cathedral, have done a double take on a man huddled under a blanket, sleeping on a bench in the cathedral grounds. On closer inspection, they see that it is a sculpture and the man depicted is Jesus, as the crucifixion wounds on his exposed feet show. The response is not always what might be expected. Some feel uneasy and challenged by this all too real reminder of the plight of so many of their fellow human beings. They walk away in silence. Others see it as an opportunity to pause and pray for those who have to sleep rough.

When a similar statute was unveiled in the grounds of St. Alban's Episcopal Church in Davidson, North Carolina, it prompted one woman to call the police to report a homeless man loitering in the neighborhood. Another man wrote and complained to the vicar that he was creeped out by the statue. Others criticized it as an insulting depiction of the Son of God as a vagrant or rough sleeper. Two cathedrals, St. Michael’s in Toronto and St. Patrick’s in New York, turned down an offer to locate the sculpture in their environs, even though the cost would have been borne by a generous anonymous benefactor.

The “Homeless Jesus” sculpture is the work of Canadian Timothy Schmalz, a devout Catholic. For over twenty years, he has been producing figurative religious works in bronze. One of his best known pieces is ‘Whatsoever You Do’ which can be found outside Santo Spirito Hospital in Rome. More recently, he has been commissioned by an anonymous benefactor to produce up to eleven replicas of this challenging piece of art, the “Homeless Jesus,” for cities around the world.

The statue, the artist has explained, is a visual interpretation of the passage in Matthew’s Gospel (25:40) ‘Insofar as you did this to one of the least of these brothers of Mine, you did it to Me.’ It is meant to provoke those who see it, to think about the marginalized and Jesus’ witness to the outcasts. As each one of the seven-foot casts of the homeless sculpture has come to fruition, the Canadian artist has heaved a sigh of relief. Obtaining an exact replica is a near impossible task. “Each line of the fabric, I try to make identical and as I cast the bronze, I try to make it as close as possible – each striation is exact and my job, after creating the clay original, is to make sure that every cast is identical.”

When Schmalz visited Ireland for the unveiling last May of the Christ Church Cathedral statue, the Catholic Archbishop of Dublin, Most. Rev. Diarmuid Martin, observed that his work wasn’t “a normal statue.” It is “a beautiful work which is not created to be looked at and admired; it is an image which should make us turn away from it. When we glance at it, our glance must ...lead towards the many park benches, the many doorways, the many sheltered corners where Jesus lies homeless every day and every night: the homeless Jesus who is down from better days; the homeless Jesus as immigrant, the homeless Jesus with mental health problems, the homeless Jesus who is just a child; the homeless Jesus who is a parent frustrated by the tragic situation he or she cannot give a loved child the hope and the future which Jesus would want that child to have,” he said. His Church of Ireland counterpart, Archbishop Michael Jackson, in whose cathedral grounds the statute was erected, noted: “Scripture tells us that the Son of Man has nowhere to lay His head.”

Discussing his philosophy of art, Schmalz explained: “I describe my sculptures as visual prayers. When I create a three-dimensional sculpture in bronze, I am quite aware that it will last longer than myself. I realize I am between two things that are much more durable than myself: Christianity and bronze metal. It is between these that I have developed a subtle appreciation for what Saint Francis meant by ‘instrument.’” When the statue was unveiled at St. Paul’s Episcopal Cathedral Buffalo, New York, it became “a beacon of hope” with people leaving food, clothing, and letters with money for the homeless at the feet of the sculpture. When another was installed in Central Presbyterian Church in Austin, Texas near the city’s homeless shelter, it inspired someone to give a $100,000 donation to the homeless.

Speaking to World Mission magazine, Schmaltz said: “I do believe that that is the magical or powerful quality that art has. Art can bring attention to things. One of my favorite quotes is from Oscar Wilde who said that the people of London did not see the fog until the painters started painting it.” Archbishop Martin observed: “This image of the “Homeless Jesus” is a reminder to people of faith and people of none that, as long as there are people who cannot find a suitable roof over their head and families without a place where they can live with dignity, none of us can roll over in our comfortable beds with an easy conscience. Conscience, public opinion and political commitment must be kept alert every day and never settle back into thinking we have done enough.”

In late 2013, Pope Francis blessed and prayed over a model version of the “Homeless Jesus” at the Vatican. Recalling the occasion, Schmalz said he was “very nervous and very excited.” The Pontiff approached amid the massive crowd from all over the world. “Through all that chaos, he stopped and prayed, touching the knee of my sculpture. Then he blessed the sculpture and the Vatican officials brought that to my attention afterwards as a very important moment for the sculpture. Afterwards, I was introduced as the artist and he said: “It is an excellent and beautiful representation of Jesus.’” What an affirmation from the highest authority for his statue – to be installed on Rome’s Via della Conciliazione, the wide and imposing avenue leading to St Peter’s Square!

The Gospel is at the heart of Schmalz’s art. When he is working in his studio in the countryside outside Toronto, he plays recordings from the Bible as background. A convert to Catholicism, at one point he considered studying to become a priest. Married now with children, he realizes his vocation is art, specifically religious art, where his deepest creative longings can journey with his soul. “I am devoted to creating artwork that glorifies Christ. The reason for this devotion, apart from my Christian beliefs, is that an artist needs an epic subject to create epic art.”

The prevalence of homelessness in Ireland is apparent to anyone walking the streets of the country’s cities. It is the most obvious symbol of the economic collapse of 2008 and, despite all the talk of dealing with the crisis by government and homeless charities, it seems to be getting worse year by year. Schmalz came across three people on the streets as he walked the short distance between his central Dublin accommodation and the unveiling of his work at Christ Church Cathedral.

When he visited Dublin in December 2014 to discuss the location of his sculpture, the country had been jolted by the death of homeless man Jonathan Corrie on the street in front of the Irish parliament. “It was a horrible irony,” Schmalz recalls. “It confirmed the need for awareness. I believe the issue in our western culture is not a lack of finance but a lack of awareness. So that is what this sculpture is here for; it is an eternal reminder to the city of Dublin, as well as elsewhere around the world, that when we see the most marginalized people in our communities, on our streets, we are seeing something that is sacred. The Son of Man, when He came down did not want to look like Mr. Perfect – He wanted to look like this. Matthew 25 is not just comfort food and it is not just ornamental – it is shocking and it is one of the most hard core challenges you’ll have in life. That’s what this sculpture is there for as a constant reminder. There should be more visual reminders like this in the city – you can’t have enough of them.”

“Saint Gregory the Great wrote that ‘art is for the illiterate’ and he recognized that the use of images was an extremely effective way to educate the general population. Our contemporary culture is in the same state today, not because of illiteracy, but because people are too busy to read. In this world of fast-paced schedules and soundbites, Christian art creates “visual bites” that introduce needed spiritual truths in a universal language. Christian sculpture acts, for many, as a gateway into the Gospels and the viewer’s own spirituality. After looking at an interesting piece of art, the viewer is curious. “Who is this man on a cross? Why does he suffer?” The more powerful the representation of the art, the more powerful the questions become. Creating art that has the power to convert; creating sculpture that deepens our spirituality – attaining these two goals describes my purpose as an artist.”

Archbishop Jackson noted last May: “The twenty-first century is not yet an improvement on the twentieth century for the homeless.” He said it was scandalous that the relentlessness of homelessness merited such a sculpture as a reminder and as a memorial. “Throughout the world of today, human beings are subjected to indignity, homelessness, trafficking and death simply for being alive and getting under the ideological skin of their oppressors. Every day for them is a Good Friday. They wait for the Day of Resurrection in hope and in fear, in trust and in betrayal, in darkness and in light.” He said he saw Schmalz’s works as “a testimony to the human spirit of individual homeless people in Dublin and to their capacity for life in the midst of danger, distress, degradation and deprivation. The “Homeless Jesus” is a reminder of their plight and terror, whatever their nationality or creed – and an icon of solidarity with them.”

Witnessing among a little flock

Considered a mission territory for its tiny catholic presence – only one-and-half percent of the population – Taiwan has been home to the Comboni Missionaries since 1997. An international community of…