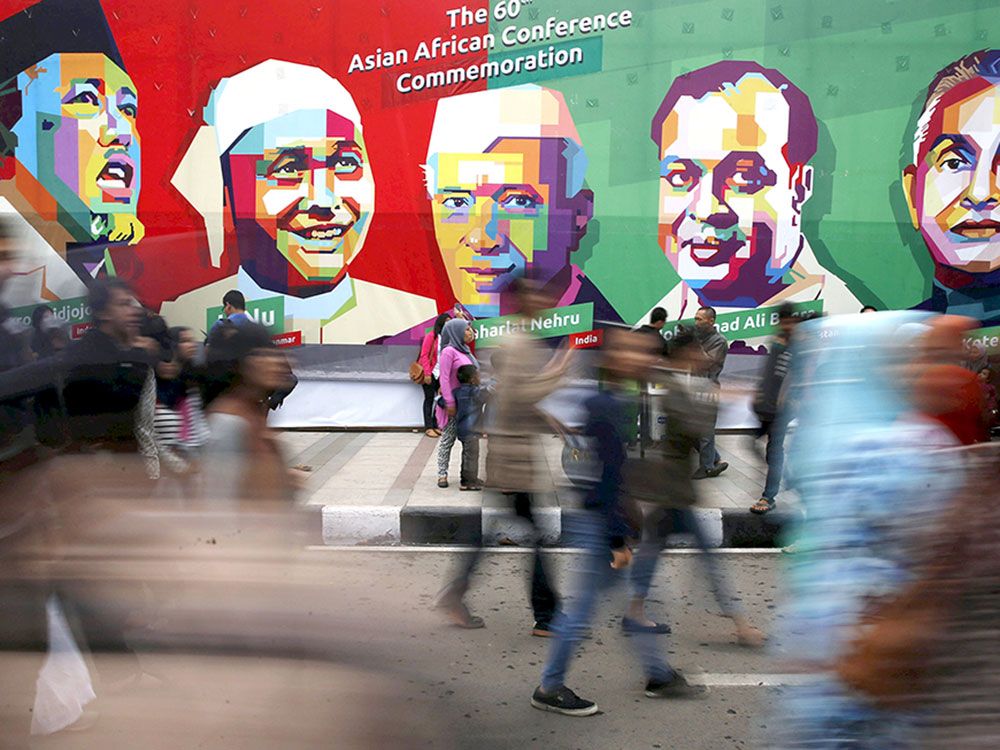 It was the first political Asian-African conference of newly-independent countries for the purpose of escaping the polarization between U.S.A. and communist Russia. In reality, it became the sign of the awakening of the colored peoples in the world scene. Pope Paul VI’s encyclical Populorum Progressio prophetically interpreted the demands of this awakening.

In April 1955, representatives from 29 governments of Asian and African nations gathered in Bandung, Indonesia to discuss peace, the role of the Third World in the Cold War, economic development and decolonization. The 29 countries represented almost one-quarter of the Earth’s land surface and more than half the world’s population. Indonesia, India and China played the leading role. Because the decolonization process was still ongoing, the delegates at the conference took it upon themselves to speak for other colonized peoples (especially in Africa) that had not yet established independent governments.

The conference had a moderate, peaceful tone. A ten-point declaration on the promotion of world peace and cooperation, incorporating the principles of the United Nations Charter and Indian Prime Minister Nehru’s Five Principles (“Mutual respect for other nations”; “Territorial integrity and sovereignty”; “Non-aggression and non-interference in internal affairs”; “Equality and mutual benefit” and “Peaceful co-existence”) was adopted unanimously.

Sukarno, the first president of the Republic of Indonesia, portrayed himself as the leader of this group of states, which he later described as “NEFOS” (Newly Emerging Forces). Even Zhou En Lai, representing communist China, revealed himself as a wise and moderate leader. He will become immensely popular at the time of his death for his efforts to curb the excesses of the Cultural Revolution and save as many people as possible from its violence.

Two observers from the U.S.A. were present at the conference. Although only in their private capacity, yet they better interpreted its wider valence for the future of humanity. The first was Adam Clayton Powell Jr., a Baptist pastor and the first African-American member of the House of Representatives. This champion of racial equality, returning to the United States, urged President Dwight D. Eisenhower and Congress to oppose colonialism and pay attention to the priorities of emerging Third World nations.

The other was the African-American author Richard Wright. His book on the trip was published as The Color Curtain: A Report on the Bandung Conference. The accent on the “colored peoples” was also in the best-seller book by an Italian missionary and journalist, Fr. Peter Gheddo, by the title The Awakening of the Colored Peoples (1956). It was these intellectuals who perceived the greater importance of the Conference as the symbol of a shift in the world scene. But it was Pope Paul VI who interpreted the demands of this awakening with his encyclical letter Populorum Progressio (PP) (1967).

PP received harsh criticism from those who wanted the Pope to remain, as somebody said, the “Chaplain of the West.” The encyclical displayed a prophetic message that found an immediate echo both in Church environments and in the world at large. It was a document really revolutionary because it looked straight into the social problem which, by then, had become worldwide and because of the operative guidelines the Pope gave which maintain a present-day relevance.

What was stopping the growth of the different peoples was the dramatic, growing gap between the societies of affluence and the hungry ones. This gap was creating an imbalance that could bring the world to the brink of war. Paul VI was convinced that if we do not dry up the swamps of under-development and do not allow the peoples to reach a minimum of economic, social and political development, their “anger” will grow to the point of provoking conflicts among nations and international terrorism.

Paul VI speaks of the “universal destination of the goods of creation,” a concept which acts as a “social mortgage” on any private property which, in this way, is no longer absolute. He speaks of an economy which should be at the service of humanity that contrasts with the imperialism of high finance that crashes peoples and reduces them to slavery – A system which increases the profit of the already rich and reduces the masses of the underprivileged to utter misery. It is what we are seeing now in the “the new world order” of globalization.

The new name for peace

The Pope’s target is a “planetary humanism” which includes all the dimensions of humanity, including the religious because if humanity can organize its life without God, eventually, it will be an organization against humanity itself. “Humanism which excludes God will be an inhuman humanism” writes the Pope, quoting the great French theologian Henry De Lubac. “Development is the new name of peace” – this famous sentence sums up the whole message of PP and became like the slogan of the emerging nations.

The novelty of the great encyclical is contained in the call to all peoples of goodwill and not only the Catholics. Moreover, the worldwide character of the social problem points out the need of widening the scope of the Church's Social Doctrine to include the development of peoples. The aspirations of the emerging peoples to development are seen as “a sign of the times” in biblical terms.

The original aspect is the essential link between development and peace. This is the point of arrival in as much as the demand of social justice can be satisfied only in a worldwide context. Failure to address this demand can unleash what was called “the anger of the peoples.” Many of the contemporary problems which appear without a solution like the recurrent bouts of terrorism, the apparently unmanageable pressure of immigrations and the presence of dire hunger are consequences of the failure to put into operation the indications that the PP gave more than forty years ago.

The changing times saw the Catholic Church substantially happy with the decolonization process. The new nations were showing themselves to the world with their young leaders, many times, formed in Catholic schools. The colonial powers had prepared the independence by encouraging the Christian missionaries to dedicate their energy mainly to education. Very few new countries, once arrived at their independence, had objected to the presence of foreign missionaries, contrary to the pessimistic fears of many.

The extraordinary moment called for the indigenization of the church leadership and that is exactly what had started happening during the time preceding Vatican II (1962-1965). It took sometime, however, before the full implications of the awakening of the colored peoples became awareness of an epochal change for the life of the Church itself. Fruit of this awareness was the book of a German missionary, Walbert Buhlman, The Coming of the Third Church (1977).

The “First Church” was that of the original disciples and the generations that followed them, centered on the Mediterranean and making the first missionary advances into lands and cultures outside of Israel. The men and women of that First Church bequeathed to us many treasures – the New Testament, the core elements of our worship, our philosophical and theological systems and our commitment to engage in dialogue with the religions, philosophies and cultures of the world.

The missionary endeavors of those early centuries led to the development of the “Second Church,” centered in Europe. It was the Church of mass Christianity. Societies and cultures were shaped by the Christian commitment of rulers and people. The “outside world” of non-belief was geographically and psychologically remote, only object of proselytism. We are increasingly moving in a new situation, a new Church, the Third Church. This new Church is global but mainly to be found in the South of the world. Today, the majority of Christians live in Africa, Asia and Latin America, with less than 40 percent living in the West.

Ideas of God, of holiness, of worship, of community, of ministry – of everything that makes a Church – are gradually becoming considerably different from what has been “normal” for more than a millennium and a half. Cherished and time-honored traditions and formulations of faith are being called into question. The Third Church lives in the midst of varied beliefs or unbeliefs, with little or decreasing political, social and cultural power. This is leading to new styles of worship, of theologizing, of community, of evangelization.

Since Christians of the Third Church, especially in Asia, are often a powerless and sometimes persecuted minority in their societies, they tend to view the role of the Church and its institutional forms from a different perspective of the West, where the Church is only now beginning to lose political, moral and intellectual power.

On various levels, people in the Churches of the West (which are still in charge) have had mixed reactions to the coming of the Third Church. Sometimes, there is rejoicing that the Holy Spirit is working in new ways in new places. Sometimes, there is fear of the unknown and a refusal to allow others to make their own mistakes as the West made its own. Much of the tension in Pope Francis’ pontificate should be understood in this context.

Centuries from now, we will be looked upon as the early Christians of what will in the future be the normal, everyday way to follow and proclaim Christ. We may be envied for having lived in an exciting time of transition. It would be a shame to miss one of the biggest events in the history of Christianity because we thought the way we have been is the only way to be.

Since Saint Peter left Palestine for Rome, no pope had visited the land of Jesus. Popes had dispatched envoys, emissaries and even Crusader armies to it, but it was only Paul VI who decided, 1,900…

In 1986, the uprising of a people united by their faith against an encroached dictator drew the admiration of the whole world. More than thirty years later, the disappointment of the people for the…