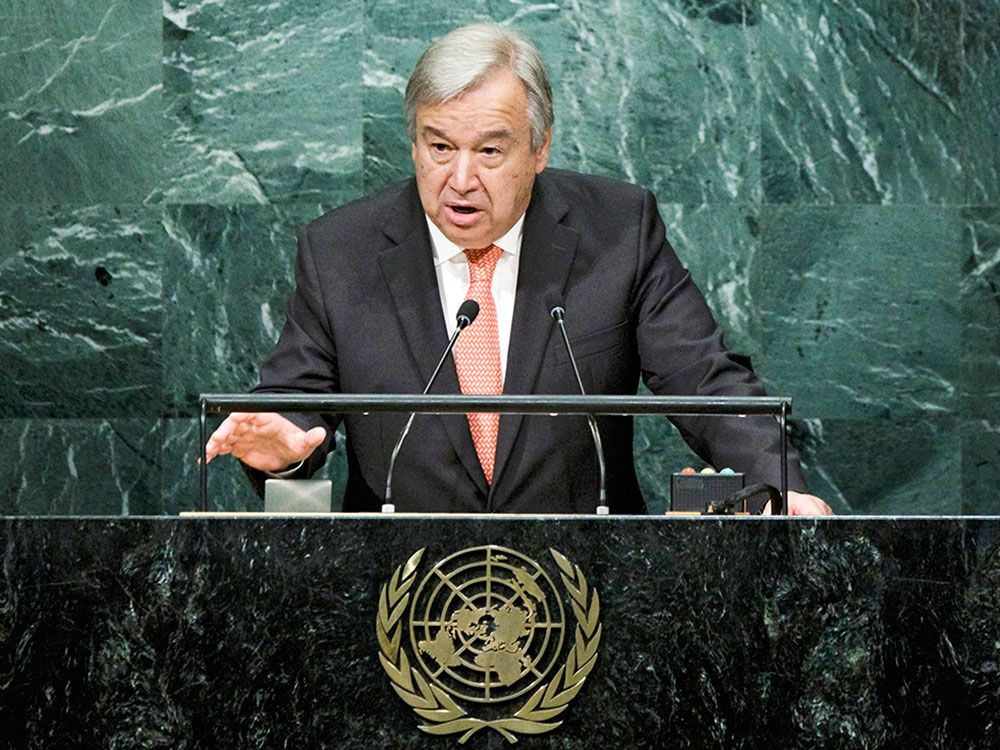 A Portuguese who headed the U.N.’s refugee agency for a decade, António Guterres, is the new Secretary-General of the United Nations. He acknowledged “huge challenges” and promised to serve the voiceless. As a devout Catholic, his inspiration comes from the Bible.

“The U.N. was not created to take mankind to heaven, but to save humanity from hell.”

Going against those expecting a woman and/or a representative of Eastern Europe to be the ninth Secretary-General, Russia lauded Portuguese António Guterres as “the best candidate available” for the job. “You are witnessing, I think, a historic scene,” said Russian Ambassador Vitaly Churkin, in October last year, announcing the Security Council’s unanimous backing of the man who served a decade as United Nations High Commissioner for Refugees (UNHCR).

In January 2017, Guterres will replace Ban Ki-moon of South Korea who served two five-year terms. “This was a ‘selection’ not an election, [but] the 2016 version was an improvement on previous ones,” said Thomas G. Weiss, expert on the politics of the U.N., in an interview done by World Mission. “It was modestly more transparent and accountable,” added the author of “What’s Wrong With The United Nations and How To Fix It.”

“When I heard the Security Council’s decision to recommend me to the General Assembly, my feelings could be described in just two words: gratitude and humility,” Guterres stated. “Humility [is what I feel] about the huge challenges ahead of us, the terrible complexity of the modern world. But it is also humility that is required to serve the most vulnerable, victims of conflicts, of terrorism, rights violations, poverty and injustices of this world.”

To those who call him to follow in the footsteps of the Swedish “secular pope” Dag Hammarskjöld, who earned this title when leading the U.N. from 1953 to 1961, Guterres was cautioned to his own limitations. “The Secretary-General alone neither has all the answers nor seeks to impose his views. [He] makes his good offices available, working as a convener, a mediator, a bridge-builder and an honest broker to help find solutions that benefit everyone involved.”

Thomas G. Weiss, Presidential Professor of Political Science and Director Emeritus of the Ralph Bunche Institute for International Studies at the City University of New York, offers an advice to the new “top diplomat”: to make clear that expectations of “miracles” are misplaced. “Guterres should quickly dispel notions, for instance, that he or anyone else is going to solve [the war in] Syria or halt climate change, or reform the Security Council.”

In Lisbon, where Guterres was born, a Franciscan priest is confident that the man to whom he has been a spiritual director for almost half a century is set to be the best Secretary-General ever. “Guterres was 18 years-old, a student [of electronic engineering], the most brilliant of his college, when we met for the first time,” recalls Father Vítor Melícias, in an interview for World Mission. “By then, on his own initiative, he was already an active volunteer doing social work in the poorest areas” of the Portuguese capital.

Both men and other youngsters formed a prayer group in the Franciscan chapel of the Missionaries of Mary. “After Sunday Mass, we used to discuss our civic projects and the country’s problems (poverty, emigration, colonial war, censorship), in the context of the Second Vatican Council.”

The Second Ecumenical Council of the Roman Catholic Church (1962–65) “encouraged the laity to be more politically active,” said the Portuguese priest. “With the rapid expansion of the group, we were forced to move into another place to elude the almighty and suspicious Secret Police [PIDE].”

The new location was the Franciscan Convent, in Lisbon, where Melícias lived. “We were like a close-knit family, an active group without an organic structure, engaged in the defense of freedom and the less fortunate.”

This “Light Group,” with other influential members such as the current Portuguese President, Marcelo Rebelo de Sousa, would be a source of inspiration to Guterres. His spiritual counselor cites several examples of a later work, including the foundation of the first national consumer protection agency, and the creation of the Portuguese Council for Refugees.

In 1974, after the April Revolution, Guterres quit the academe to join the Socialist Party, going through the rank and file all the way to the leadership. Between 1995 and 2002, he was twice prime minister, a skilled negotiator who adopted long-lasting social and economic measures, from pioneering a new pre-school system to introducing an unprecedented law decriminalizing the personal use of all drugs.

In foreign affairs, two of his greatest diplomatic achievements were Portugal’s successful bid to join the Euro and the role he played to secure the independence of East Timor.

Fiascos were also unavoidable. By the end of 2001, his party suffered huge losses in local elections. To avert “a political quagmire,” Guterres quit the government. He went back to his volunteer social activities, anonymously teaching Mathematics in a “problematic” community, before embracing an international career.

Personal ambition is not his motivation. He had previously declined an invitation to be president of the European Commission, refusing to be an absent father to his two children, who had lost their mother to a debilitating disease. In 2005, the charismatic and diligent Guterres rose again to notoriety as the 10th High Commissioner for Refugees, reforming the organization to face the worst humanitarian disaster since the end of Word War II.

Parable of the talents

As U.N. Secretary-General, Guterres’ mission “is almost impossible,” according to Ambassador Vitaly Churkin.

“Transformations are imperative, in headquarters and in the field, if the world organization is not to become a relic but capable of responding to a growing list of the twenty-first century’s life-threatening challenges,” Thomas Weiss said, listing “proliferation of weapons of mass destruction, pandemics, terrorism, climate change, mass atrocities [wars in Syria, Yemen and Africa] and poverty [more than 65 million people are displaced and almost 800 million face starvation]” among them.

In the last ten years, under the “invisible” Ban Ki-moon, the U.N. has “almost disappeared from many radar screens, and its staff morale has sunk to new lows.” For Guterres, the biggest challenge will be to “move quickly during the first few months of 2017 to rapidly set a new tone and shake up the bureaucracy.”

So seven decades after replacing the unsuccessful League of Nations, we might ask, borrowing the title of Weiss forthcoming book (available in 2018), “Would the world be better without the U.N.”? The author’s answers are questions:

“Would the world be a better place if Syria still had its chemical weapons? Would women’s plight worldwide not be even worse without efforts to publicize gender inequality since the Commission on the Status of Women began operations in 1946? Would we be closer to halting climate change without analyses by the Intergovernmental Panel on Climate Change? Would the bird flu and Ebola pandemics not have been even bigger blights without the World Health Organization? Would the world’s trouble spots be calmer without 110,000 Blue Helmets?”

“One can imagine a U.N. and a planet without concerns for peace, stability, and prosperity but it would be a much poorer world and, at its core, much less human and humane than the one to which the world organization aspires and, at its best, contributes and achieves,” Weiss said.

“Of course, the United Nations could and should have been better and done more,” Weiss added. There is still time. A world without the world body is neither plausible nor desirable. A world with a more creative and effective U.N. is both.”

In July, explaining why he applied to the “most difficult job in the world” (as defined by Trygve Halvdan Lie, the first U.N. Secretary-General), Guterres stated: “I am Catholic. I believe that my motivation is a certain story in the Gospel called the “Parable of the Talents” [Mathew 25:14-30]. I feel that it is my obligation to use my abilities to address urgent concerns.”

Father Melícias clarifies why the “Parable of the Talents” is so important to his “Christian humanist, radically ecumenical and pluralistic” disciple. “We used to meditate on this biblical text. It’s our philosophy. The principles guiding Guterres are the words of Christ in our prayer: ‘I came to serve, not to be served’.”

The Korean War, which broke out in June 1950, was one of his biggest challenges. He supported U.N. action against North Korea as the aggressor. The Soviet Union did not like this stand.

One of the most revered secretaries-general, Hammarskjöld was a pioneer of preventive diplomacy and conflict resolution processes. His most prominent engagement was the decolonization of Africa.

He encouraged negotiations between Kennedy and Khrushchev during the Cuban Missile Crisis (1962). During his tenure, the Operation Grand Slam ended the secessionist insurgency in Congo.

Waldheim participated in the Paris International Conference on Vietnam and presided over the 1st phase of the Geneva Peace Conference on the Middle East.

During his two terms, he led mediations between Britain and Argentina in the aftermath of the Falklands War, and tried bringing peace to Central America.

The genocide in Rwanda that left over one million people dead was the U.N.’s “biggest failure,” admitted Boutros-Ghali. He was also criticized for not pushing hard enough to end Angola’s civil war.

A Nobel Peace Prize laureate, he played a central role in the creation of the Global Fund to Fight AIDS, Tuberculosis and Malaria, and the adoption of the U.N.’s first-ever counter-terrorism strategy.