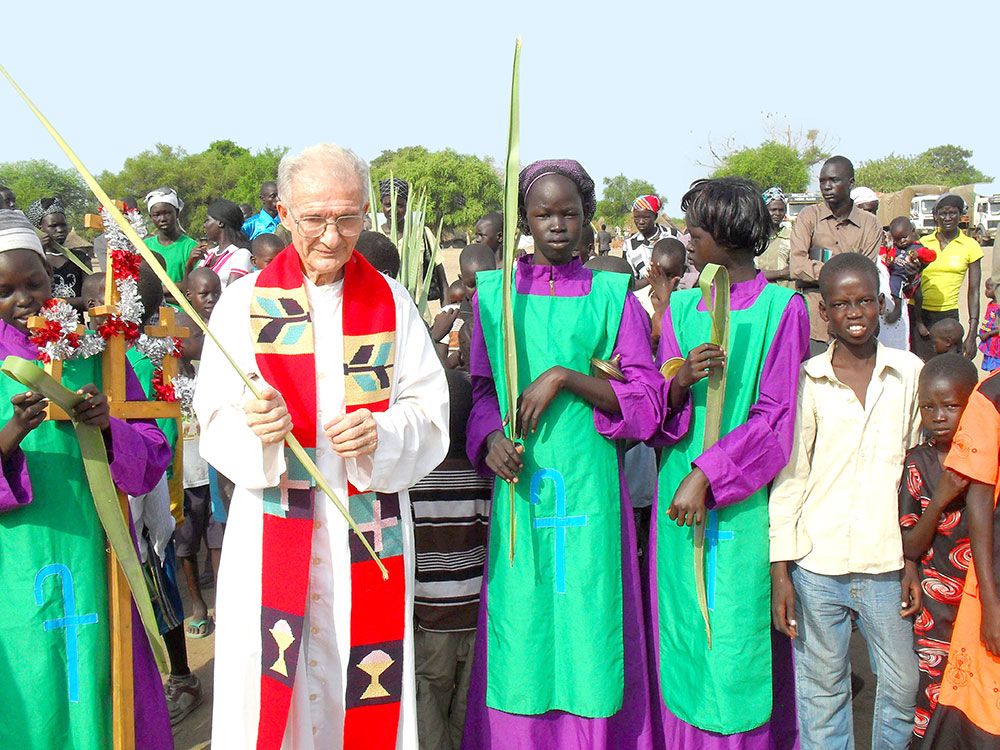 In a country ravaged by war, forgiveness is the contribution Christians can offer to a society divided along ethnic lines and rivalries. A missionary in South Sudan shares a couple of stories on how his teaching brought about pardon, mutual acceptance and peace.

In the eastern region of South Sudan, there are people who live along the rivers in a territory that, for six months, is flooded by pluvial waters and the overflow of the Nile River. They are the Nuer people, who like to be called by a different name, nath, which means “people of the origins.”

Like their Dinka neighbors, the Nuer belong to the Nilotic ethnic group of East Africa, including other ethnic groups such as the Luo, the Shilluk and the Anyuak. The Nuer are shepherds and they know almost everything about cows. During the dry season, they move with the herds to the grazing areas and remain there until the beginning of the rainy season. They also dedicate themselves to agriculture, but with ancestral methods, merely to cultivate sorghum, corn and vegetables. Tall and usually thin, dark-skinned as ebony, at the age of 12, they undergo the initiation rites. Without complaining, they allow to be marked on the foreheads with six horizontal strokes, the scars of which will remain forever, indicating the event of passage into adulthood.

The Nuer are used to a hard life and, although generally they are kind people, a dispute over a woman, cattle or possession of land, is enough to cause a big quarrel. A fight, from time to time, seems to have become a way to break the monotony of life.

When two groups, for serious reasons, are divided, the first step in order to achieve reconciliation is to seek an agreement between the people directly involved. If not, a representative of one of the parties appeals to the community. When the community intervenes and the culprit categorically rejects any proposal to restore concord, he is seen as a dangerous person and is expelled from the community.

Unfortunately, this happens frequently. A Nuer accused of slander will be so infuriated that he will fight like a lion to defend his reputation, even if guilty. Even before the evidence, he will deny everything and will play himself as victim. His friends will be forced to intervene to calm him down and try to convince him that he was wrong.

The Nuer know how to defend themselves and are very shrewd in changing the cards on the table in order to make the others believe that the culprit is the victim. In fact, such behavior can be found anywhere among other peoples but the Nuer know how to do it exceptionally well.

For a Nuer to admit he was wrong and to apologize is a humiliation. He feels the need to make others believe that he is a strong man who knows how to disentangle himself from a complicated situation and never does anything wrong. If someone wants to accuse a Nuer of something that can humiliate him, pay close attention not to do it in front of his wife or children. Otherwise, there will be serious problems. When a man is humiliated, he can kill without flinching, whether innocent or guilty.

One day, an elderly catechist came to me very angry. A young catechist had grabbed him by the hand and given him such a violent push that he had fallen to the ground and almost hit his head. I called the young catechist asking for explanations of what had happened, but without being able to understand much. Then I summoned the catechists who had witnessed the scene. They immediately got angry with the elderly catechist, accusing him of having gone first to me instead of going to them, following the normal procedure. From the version of the witnesses, it seemed clear that the fault was definitely of the old catechist. It was he who provoked the young man who, feeling attacked, instinctively reacted to defend himself.

The meeting lasted for hours. The older catechist kept silent but angry because others dared to accuse him, he a veteran! Fortunately, with us was another community elder who, taking the word, reproached the old catechist. His intervention made things simpler. At this point I went to the elderly catechist and applying my long experience and knowledge of the psychology of the Nueres, spoke in favor of the young one. I sought to minimize the offense given to the elderly, presenting it more as an unpleasant incident rather than a deliberate lack of respect from the young man who had reacted instinctively for fear of being beaten. The two eventually reconciled in front of the group and I gave them my blessing.

Once I was invited to speak at an elders’ village meeting. I said: “Do not stain this sacred land [South Sudan] with bloodshed.” The next night, a man entered the hut of a woman who was with her husband. The latter took a spear to kill the intruder but restrained himself. It was enough to scare him away. The next morning, the woman’s husband reported the case to the police and explained that he had not killed the adulterer because Father Antonio had told them not to desecrate the sacred ground. And asked for justice through the payment of a fine.

Another episode. One day, George agreed that a friend, destined to be killed for revenge, slept in his hut, and he would sleep in the other’s hut. During the night, some men came and asked George where the pre-chosen victim was. He lied but they insisted and pointed a gun to his head. Startled, he started screaming asking for help. He was killed right there. Gathered around his grave, the family designated the person who should be killed for revenge. But one of the persons present persuaded them not to do that because that was what Father Antonio had taught, adding that George was a catechist and a dear friend of the priest.

Cases like these, however, are exceptions among the Nuer. In fact, reconciliation, after a person’s death, is difficult to happen, even among Christians.

Evangelization on this delicate point passes through the catechists. Starting with the presentation of the commandment “You shall not kill.” The Nuer believe in God and, therefore, it should not be difficult for them to accept a divine command. God – Kuoth Cak – gave us the fifth commandment and He is our Father.

We have to insist on the value of each person: each of us is created in God’s image and called to share in the divine life. Earthly life is a time of preparation for heaven, where we will take part in the family of God. When Jesus came, He taught us to love everyone, even our enemies. And He did it first.

Traditional rites should be preserved: the death of a bull (as in the Old Testament, sacrifices were offered to God), reparation by the offering of cows, and drinking the gall mixed with fresh milk. These rites can be concluded with the laying of hands on the culprit and the blessing by a priest as a guarantee of a permanent Christian reconciliation.

Time Up For School

One of the most devastating “side effects” of COVID-19 was the impact on education. The prolonged closure of schools had catastrophic repercussions, especially in poor or developing nations, where…