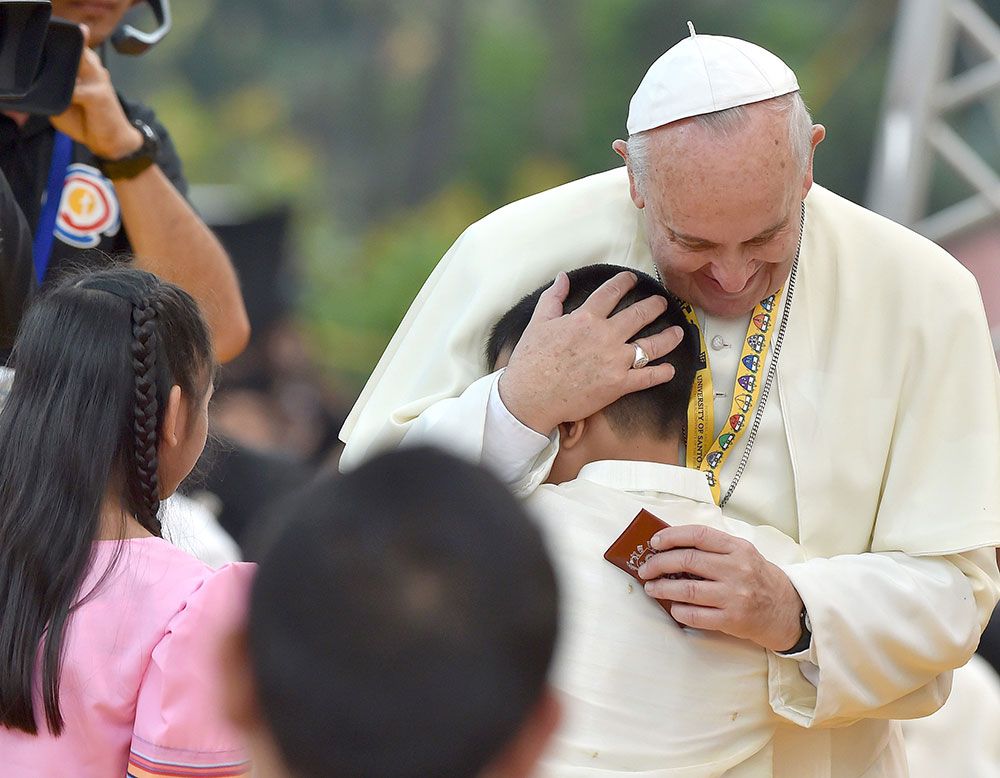 In biblical times, children were hardly considered of social value. In the Gospels, their appearance was scarce. Yet, during his public life Jesus interacted with them. He valued the younger members of society and acted in their favour.

Women, children and slaves are often quoted together in the Bible because they were seen as similar. Women were always under the authority of a man, either their fathers before marriage or their husbands, afterwards. Slaves, by their very nature, occupied the last niche in society. Children had little social value. Most families wanted a male child, as they expected a male child as their first child.

Children were in any case under the authority of their father. A male child would slowly be introduced to adulthood and leave his home sometime after puberty, when he entered an arranged marriage. An orphaned child was destined to poverty and abuse, unless a male member of his/her family would accept responsibility and represent the child in official meetings. It is no surprise, then, that children do not occupy a large space in the life of Jesus. They were simply invisible in first century society. However, the evangelists were not unaware of their presence and importance. A first point can be made about Jesus ‘childhood.

Jesus’ Infancy
While we know nothing about his early life, we notice that the Gospels of Matthew and Luke open with what is known as the Infancy Narrative. Biblical scholars warn us that these chapters are not historical, i.e. a faithful rendition of events, but theological. We find in these pages the themes that will later be expanded during Jesus’ public ministry. Nonetheless, both Evangelists make a point that Jesus is the Saviour even when just a new-born.

This is done with subtle techniques. When Mary enters Zacharias’ house (Luke 1:39-45), Elizabeth exclaims “when I heard your greeting, the child in my womb leapt for joy.” Through this literal statement, Luke wanted to say that the presence of Jesus, even as a forming child in Mary’s womb, was greeted with joy by the prophet taking shape within Elisabeth.

Later, when Jesus was actually born, we meet Joseph and Mary secluded in a backroom of a Palestinian house. No one notices Jesus’ birth. However, there were shepherds camping just outside the town. Shepherds were considered people of low status, regarded as criminals for often they would steal and even kill – or so people believed. They lived in the open, far from mainstream society. Since they were impure and could not participate in religious rituals, they were considered sinful.

Yet, it is to these people far from God that an angel of the Lord appeared and said “do not fear,” God is not here to judge, but to share life. These shepherds listened to the proclamation of good news, went to visit the baby and returned “giving glory and praising God.”

Matthew’s narrative is different from Luke’s. He focuses more on the presence of the Magi. Popular understanding transformed these visitors in three Kings from Persia. Three because of the gifts of incense, gold and myrrh; kings because they were considered of noble origin.

In reality, Matthew speaks of magoi, that is, magicians or sorcerers. That was scandalous. Magicians were considered evil people, persons incapable to receive God’s blessings, far from salvation. But this is exactly what Matthew wanted to say. These people, far away from God, came to meet the baby Jesus and they accepted the salvation offered by this baby.

Baby Jesus Is God
Both Luke and Matthew claim that in this baby Jesus God is no longer far from human beings, He is close to them and wants to share His life with people of all time. This is true from the birth of Jesus. He is but a small child, unable to talk, walk, or speak. Yet, He is already the Messiah who brings salvation and closeness to the Father.

During His public life, Jesus interacted with children. Much of this is not recorded because of the cultural aspects we highlighted above. We know that people brought children to Jesus so that He could bless them (Matthew 19:13-14). In other occasions, Jesus did not shy away from using children as images of faith, of authenticity and closeness to God. “Unless you become like children” clearly points to the fact that Jesus valued the younger members of society and was not afraid to use their image to drive a point home. (Luke 9:47-48).

At the same time, we cannot say much more. Children appear in less than ten quotations in the Gospels (Mark 9:36, 10:13; Matthew 18:2, 19:13; Luke 9:47, 18:15) and most of these passages are parallels of Mark’s narrative, the oldest written Gospel. Please note that when Jesus speaks of “these little ones” (microi in Greek – Matthew 18:10-14) He was not referring to children, but to disciples of limited understanding of God and His action in history.

Even though Jesus did not speak explicitly about children, more can be inferred from the Gospels. For instance, the Gospel of Luke places the oppressed at the centre of Jesus’ activity. Luke regarded the Roman Empire as a good tool to spread the Gospel. All peoples are shown as capable and kind. This positive outlook did not stop Luke from being critical of human behaviour and structures. More specifically, Luke was interested in the relation between rich and poor, oppressors and oppressed.

The rich, the powerful, those who have consolation in this world will be lowered, a theme present since the Infancy Narrative (see the Magnificat, Luke 1:46-56) and later expanded in the Gospel. The poor, the outcast, those who have been rejected on the basis of human standards, receive God’s attention and will be raised up (1:53, 4:18, 6: 20-24).

The list of these people is endless: we find those who are crippled, lame, blind, deaf, sexually mutilated, ritually excluded from the Temple, sinners and tax agents. Particular attention is given to women who occupied second place in ancient societies. We can add children.

They are not specifically mentioned, but they certainly shared in this world of oppression and almost invisibility.

Luke says that God intervenes in this world by showing His love for the lost, a category of people who do not always coincide with the poor. Luke emphasizes the salvific aspect of the Good News more than any of the other Gospels.

God’s Love For The Children
There are also some cases when Jesus took action in favour of children. He healed the child of a foreign woman (Matthew 15:28), cast demons out of children (Matthew 17:18) and rose to life a dead child (Mark 5:41). A very interesting story is that of the sharing of the loaves (John 6). In that Gospel we read that Jesus is preoccupied with creating the new people of God.

His action reminds us of the Eucharist. An important role is played by a very young person, who provides the fish and bread for the sharing, a sharing that fed thousands of people. The sign – John does not speak of a miracle – is particularly strong if one realizes that Jews did not freely shared food they did not prepare. It went against their dietary laws. The real miracle is that of overcoming this fear of impurity thus becoming one new people of God. This was possible because of the generosity of a young person who shared what he had.

Jesus’ teaching is clear: welcoming and respecting every single person is a sign of living in the light of God. Children have a special place in this. A child is a fragile person, it is easy to break a child, to oppress him/her with wrong behaviour. On the other side of the coin, every time we treat a child with respect and attention we mimic God’s love for children.

Respect for children is then an important aspect of our personal life. It should become the basic attitude of society. Attention to children means minding education, health, but also the integrity of the family, the most important place where a child grows and is initiated to life.

A Generation of Movers

Millennials make up 30% of the total population in the Philippines and by 2020 will constitute 50% of the work force. But who are these millennials and what kind of creatures are they? A long-time…

The Ati tribe’s 2.1 hectare property is by far the smallest ancestral domain in the Philippines. Other domains cover thousands of hectares of land that are sold or used for purposes of making the…