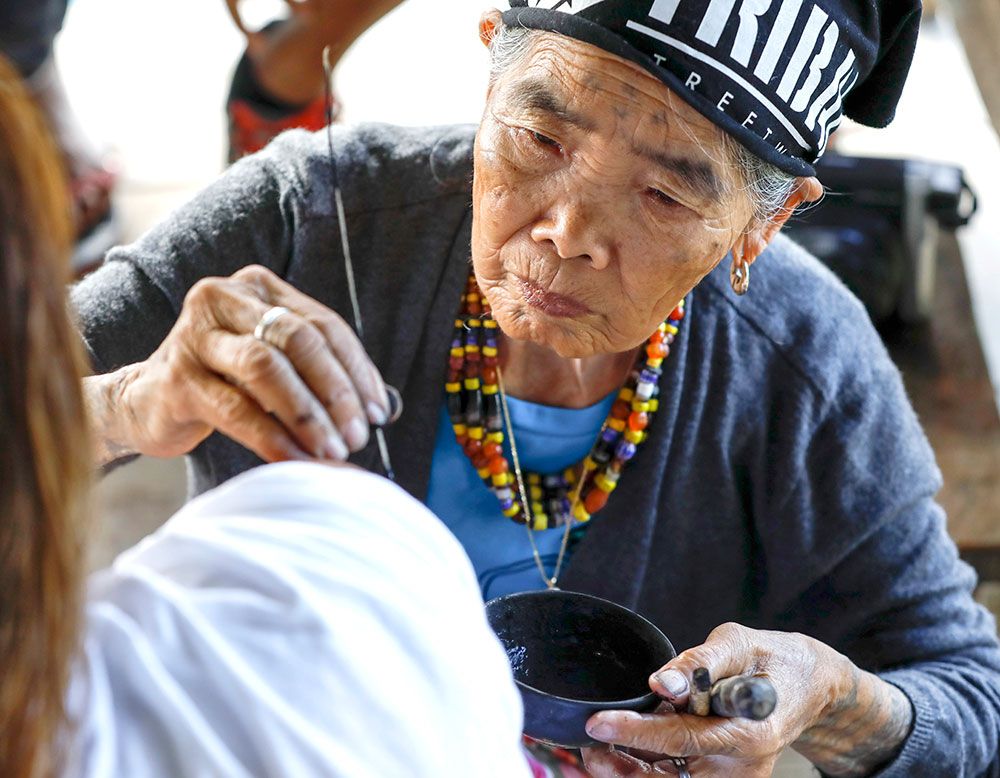 In a remote village in Buscalan, Tinglayan Kalinga in northern Luzon, Whang-ud, a 90-year-old tattoo practitioner (manbatok) resides and continues to practice an age-old tradition of tattooing (batok).

In the Butbut village, Whang-ud would sit quietly in her hut and would greet local and foreign visitors entering Buscalan. One could easily recognize Whang-ud with both her arms tattooed and gentle demeanor. Her tattoos are records of her life as a manbatok.  Tattooed at a young age with other young men and women, whose intricate tattoos functioned as painful aesthetics, markers of social status, symbols of their political, social and religious affiliation, ethnic identification, among others.

The tattoos (batok) have become a place-based ritual for this particular group. For Kalinga people, tattoos signify prestige, beauty, and honor. The distinct, symmetrical patterns are derived from their oral tradition such as in epics, cultural practices and the environment that they live in communion with their revered ancestors. A person that is tattooed becomes a full social person in Kalinga society.

Learning How To Tattoo
Tattooing in the past was done by a resident and or a traveling tattoo artist, the latter being able to travel outside the village to tattoo for a fee. This explains why there are similarities of tattoo designs in other Kalinga villages and other communities such as in Bontoc and Ifugao. In Buscalan, in the early 1930’s there was an older tattoo practitioner by the name of Whaggay from Ngibat, a neighboring village from Buscalan, that tattooed Whang-ud soon after her puberty age, when she also learned indirectly how to tattoo from constant observation.

To become a manbatok, one should be able to sustain the practice, as the skill requires depth and knowledge in tattooing. Whang-ud learned the meanings behind the traditional tattoos based on her culture and how these are passed on to her by her predecessors. She also observed the beliefs (paniyaw) and taboos (ngilin) associated with tattoos based on traditional customs.

Tattooing The Skin
Whang-ud is renown because of her stature as the oldest tattoo artist, the rarity of her designs and the traditional technique that she employs in tattooing. She would use the lemon thorn attached to the tip of the stick (gisi) as her main tattoo instrument, with a stick (pat-ik) that taps the gisi and pierces the skin to create the initial tattoo designs. For her ink, she would scrape the soot from an old clay pot or an aluminum pan and mix this with a little amount of water for the right consistency.

In the past, it would take a day to tattoo an arm, and another day for the other arm. Today, it would take an hour to finish a tattoo pattern. Traditionally, the tattoo designs are placed on the face, back of the hands, lower and upper arm, shoulders, back and on the legs. With the visitors coming in to the village, they are tattooed on the different parts of the body, mostly to reveal the tattoos as part of their individual identities.

Popularizing Tattoos
In 2009, the roads leading to Buscalan were widened, thus providing greater access to this once remote village. Soon after, tourists would come into the village to get tattoos from Whang-ud. Tourism has brought new livelihood for residents of Buscalan: opening their homes to lodgings, eateries and souvenir shops to cater to tourists’ needs. More importantly, the tattoos that were once abhorred in the past because of its association to headhunting are now being appropriated by the locals as part of their proud ethnic identity.

With the increased demand for tattooing, Whang-ud trained young women to tattoo. Foremost are Grace Palicas and Elyang Wigan who were the first young women mentored by Whang-ud. Currently, there are ten younger female tattoo artists from the age of 12 to 17 years old who are now tattooing the traditional designs on tourists. At the end of the tattooing session done by the younger apprentices, Whang-ud would tattoo three dots (tuldok) to authenticate the tattoo designs that serve as her “signature.”

The tattoos that were once held sacred by the Butbut have now become mere graphic decorations on the body as part of a personal or individual identity, and no longer place-based. The tattoo designs and motifs can now be tattooed on tourists with their personal meanings.

As Whang-ud remarks, the tattoos are the best remembrance that the people have received from her. In spite of her age, she said that she will continue to tattoo, as long as her eyes can see.

As the death toll of drug-related killings continue to rise following the new administration’s war on drugs, some Church leaders have come forward offering better solutions. Filipino priests and…

The life of the Filipino villages and parishes is built around the “Fiesta”, a yearly celebration of the Patron Saint which includes the preparations, the solemn Mass, the procession with the images…

Letting the Light of Jesus Shine

Many years ago, a fourteen-year-old boy was the first to talk at the first ever meeting of Light of Jesus. Now, decades after, Bo Sanchez leads this Catholic community which has thousands of people…