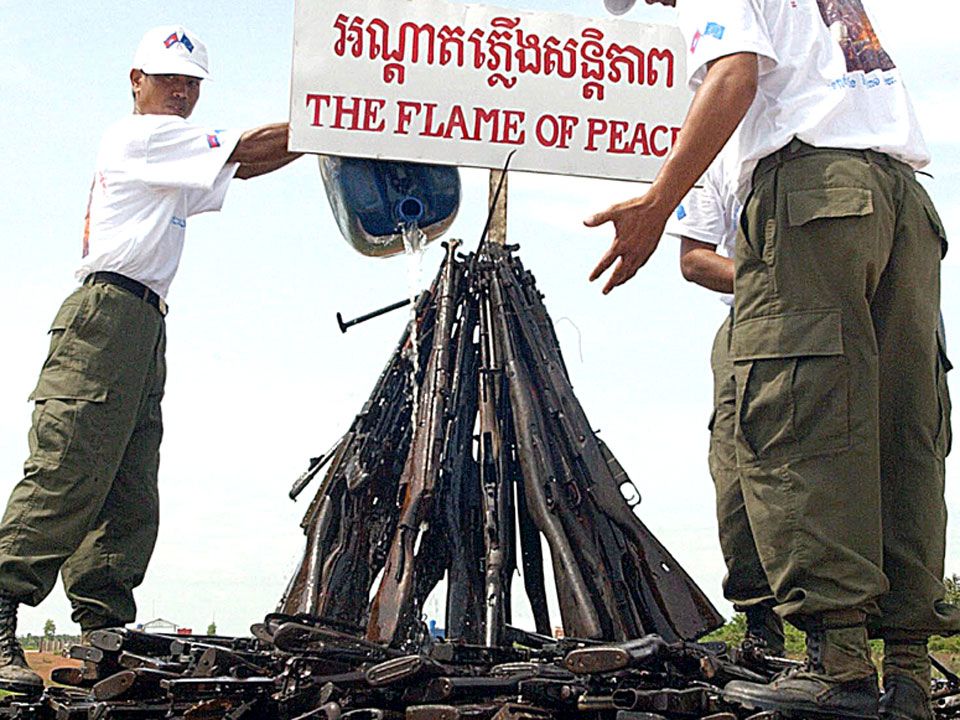 To be an authentic peacemaker, inspired by the Gospel and a nonviolent approach, requires special skills. Archbishop Thomas Menamparampil shares a few lessons that he has learned working for peace in Northeast India, in the context of ethnic conflicts.

1.  The first learning I have acquired is that a peacemaker needs to unlearn the skills of confrontation and instead develop the capacity needed for reconciliation.

2.  If, in an on-going conflict, we take it for granted that one side is definitely right and the other side totally wrong, we cannot succeed as mediators between groups in conflict.

Let us begin by listening at length to one group who is making loud claims of fighting for justice for its own people. Then, let us turn to the other side. Surprisingly we will discover that they too are waging a war of fairness for their community’s interests. Both their ideas of justice clash. When justice clashes with justice, the peacemaker finds himself in a helpless position.

A peacemaker must be prepared to fail. However, he should never give up. On the contrary, he should be more determined to make the additional effort when the situation calls for it.

3.  Unless you can empathize at depth with contending groups the passion they have for their goals, the sense of justice that motivates them, their approach to their problems, or some aspects of their cause, you will not be able to initiate a dialogue.

But if you are profoundly struck by the magnitude of their grievances and are able to understand (not necessarily approve) the excesses to which their ‘legitimate anger’ has led them, they will, with caution, begin to respond. They are not asking you to say much, but to feel much. They are not asking you to appropriate their anger, but to experience their pain in the inhuman situation in which they have imprisoned themselves at the moment.

4.  There is an important learning I would like to share: there is a deep longing for peace even in the heart of the sternest combatant.

If the peacemaker wants to retain his credibility, it must be clear to the two opposing sides that he understands that they were ‘compelled to resort to violence’ only because they wanted to convey with force a needed message to the public in general, and to their opponents in particular.

5.  The peace negotiator must be credible and acceptable to the warring groups. If he or the organization he represents is well known for their beneficent services and non-controversial activities among the communities in collision, the belligerents will turn to him as a peacemaker, or even welcome him when he takes the initiative. His ability to build up confidence-generating relationships with the parties concerned is the key to his success.

6.  The peacemaker should enter into a relationship with the two opposing groups with all sincerity. If he presents himself as a self-appointed mediator or arbitrator, he will be rejected. Criticizing one party to the other is not the way for a peacemaker to show his neutrality. A commitment to humanity that shows in his words, deeds and relationships is more convincing.

7.  When an inter-community battle is raging, bringing the ‘right’ people from contending parties to the negotiation table is in itself an achievement.

I would describe the persons who matter in a peace dialogue as “socially important people”. They are the people who are respected in society, who are non-controversial, and groups whose opinions have wide acceptability among radicals and moderates. Such persons would be thinkers, writers, professors, speakers, social workers and people who inspire society with their charismatic leadership or prophetic utterances.

8.  Always search for ‘effective persons’ who are quiet and almost ‘invisible’ individuals who ‘think’ and provide a ‘philosophy for action’ in the context of the present conflict.  They propose the goals. Their ideas keep teams together. Some of them develop strategies, maintain public contacts, handle publicity, build an image for the group, and sustain the stamina of the activists.

9.   There are times when negotiators representing conflicting interests will feel unprepared to face each other in the first session of a meeting. If such is the case, it would be best that each group spends some time in separate meetings to clarify and formulate their different points of view for the inter-group negotiations.

10  When the two groups finally come together, I would suggest that the citizen-peacemaker remains as a confidence-builder, a facilitator who helps to create a serene interactive atmosphere. He may suggest a step forward at key moments, invite deeper reflection, and whisper a solution, allowing the contestants themselves to flesh out their differences. If he remains inconspicuous and keeps a low-profile, his contribution will be greater. The less the peacemaker interferes with the natural flow of things, normal processes of discussions, and the practical side of the decisions to be taken, the better.

11.  Only when the opposing groups are mentally prepared to look for other solutions than violence, is it advisable to propose compromises. However, it is unwise for the peacemaker to over insist on specific areas in which a compromise must be made. It is far better that these emerge from the participants’ lived-experience and agonizing search for a way out of the deadlock they are caught in.

12.  Often the persons you have invited for peace negotiation have no authority to decide on issues on behalf of the two contending parties.  Nevertheless, they can make proposals on behalf of the communities. If their suggestions are approved, the community leaders may move on to the final round of negotiations in the presence of civil authorities, in which the citizen-peacemaker need not be present.

13.  The mediator should avoid making public statements without having studied the issues from different points of view, or taking sides too fast and condemning in haste, alienating persons and communities to whom he has a responsibility.

In the context of Northeast India, a religious leader needs to be cautious. It is for the religious leader to discern and decide before God in what manner he may come out before the public with his prophetic utterances, gestures or actions.

14.  Violence is not broken by superior violence (e.g., terror against terrorism), but by another power – the tremendous capacity for suffering. If you wish to save the lives of others, be prepared for death. This is a teaching that Mahatma Gandhi and Martin Luther King were convinced of. The peacemaker must be ready to go through any suffering.

15.  Experience tells us that there are many factors in a complex situation that can discourage the peacemaker. He does not need to refute every charge and counter every opposition he faces. He could respond to those accusations with a simple explanation or even allow things to be said and events to flow to their natural conclusion. He could let people speak just as they wish for a while. But he should be honest and upright in his intent and ego-less in his service. He should never give up.

16. The inwardly committed peacemaker finds renewed strength and motivation in his personal convictions. He is ready to begin all over again. He gets busy with the healing of historic memories and the demolition of stereotypes one by one. If he is a believer, he sees God working out everything for good in every event of his life.

17.  For a peacemaker who is a religious believer: he will have to have confidence in what I have chosen to call the ‘mysticism of the brief moment’; he must have absolute trust in the power of prayer.This is the source of his strength in moments of anxiety, tension, opposition, discouragement, failure, and humiliation. It is with this strength that he builds bridges across communities and cultures, sorts out differences, persuades people to forgive, join hands,  and strive on to create a better world. He must take into account that peacemakers did not always succeed, that some lost their lives, and that their accounts often read like a tragic waste.

But he is sure that nothing is lost in God. Peace comes in its own good time. There are many ways in which God makes people ‘beat their swords into ploughshares’. The peacemaker is grateful if he is able to contribute a small and humble role in it.

A Question of Quiapo Faith

Even though the grand procession of the image of the Black Nazarene has been canceled this year due to coronavirus, the devotion to the centuries-old icon of Jesus Christ is unique in the world. Prof.…