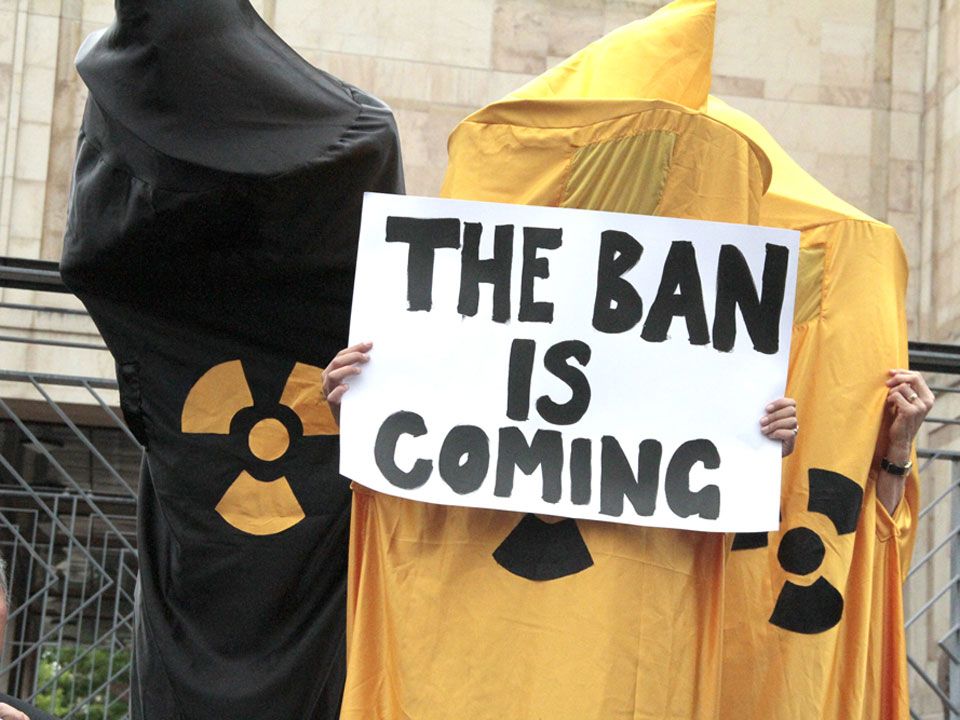 For its decade-long advocacy that culminated in the adoption of a landmark global treaty to ban nuclear weapons, the International Campaign to Abolish Nuclear Weapons (ICAN) received the 2017 Nobel Peace Prize. Will the treaty pave the way for the elimination of one of the greatest threats to human existence?

In August 1945, the United States detonated two atomic bombs over the cities of Hiroshima and Nagasaki, instantly killing at least 100,000 Japanese civilians and military personnel. In the ensuing years after the end of World War II, tens of thousands more would die of radiation sickness and radiation-induced cancers.

In 1962 at the height of the Cold War, the Cuban missile crisis brought the United States and the then Union of Soviet Socialist Republics (USSR) to the brink of nuclear war. Only a last-minute compromise between American President John F. Kennedy and Soviet Premier Nikita Krushchev averted what seemed to be the beginning of World War III.

Most recently, North Korea’s continued missile tests and bellicose exchange of rhetoric with the United States have brought the world the closest it has ever been to a nuclear war since the Cuban missile crisis. Considered a rogue state and one of the world’s most brutal regimes, “North Korea has invested heavily in the development of increasingly longer-range ballistic missiles, and the miniaturization of its nascent nuclear weapons stockpile,” according to the American think tank Center for Strategic and International Studies (CSIS).

North Korea is one of the nine nuclear-armed states in the world today. In a blunt and chilling assessment, the Washington D.C.-based non-profit Nuclear Threat Initiative (NTI) stated that the combined nuclear arsenal of these nine countries “is enough to destroy the planet hundreds of times over.”

The failure of the nuclear powers to disarm has heightened the risk that other countries will acquire nuclear weapons, warns ICAN, a coalition of non-governmental organizations in 101 countries advocating for a strong and effective nuclear weapon ban treaty.

“The only guarantee against the spread and use of nuclear weapons is to eliminate them without delay,” ICAN stressed. “Although the leaders of some nuclear-armed nations have expressed their vision for a nuclear-weapon-free world, they have failed to develop any detailed plans to eliminate their arsenals and are modernizing them.”

On July 7, 2017 after a decade of advocacy by ICAN and its partners – an overwhelming majority of the world’s nations adopted a landmark global agreement to ban nuclear weapons.

Known officially as the Treaty on the Prohibition of Nuclear Weapons, the groundbreaking accord was negotiated at the United Nations headquarters in New York last March, June and July 2017, with the participation of more than 135 nations, as well as members of civil society. It opened for signature on September 20, 2017 and will enter into legal force once 50 nations have signed and ratified it. The treaty is permanent in nature, and will be legally binding on those nations that join it.

The treaty prohibits nations from developing, testing, producing, manufacturing, transferring, possessing, stockpiling, using or threatening to use nuclear weapons, or allowing nuclear weapons to be stationed in their territory. It also prohibits them from assisting, encouraging or inducing anyone to engage in any of these activities.

Nations are obliged to provide assistance to all victims of the use and testing of nuclear weapons and to take measures for the remediation of contaminated environments. The treaty’s preamble acknowledges the harm suffered as a result of nuclear weapons, including the disproportionate impact on women and girls, and on indigenous peoples around the world.

On October 6, 2017 the Norwegian Nobel Committee awarded the 2017 Nobel Peace Prize to ICAN “for its work to draw attention to the catastrophic humanitarian consequences of any use of nuclear weapons and for its groundbreaking efforts to achieve a treaty-based prohibition of such weapons.”

While the international community had previously adopted binding agreements prohibiting land mines, cluster munitions and biological and chemical weapons, the Norwegian Nobel Committee noted that prior to the adoption of the Treaty on the Prohibition of Nuclear Weapons, there was no international legal prohibition on nuclear weapons, which are even more destructive.

“Through its work, ICAN has helped to fill this legal gap,” said the committee, praising the coalition for being “the leading civil society actor in the endeavor to achieve a prohibition of nuclear weapons under international law.”

Citing the unacceptable human suffering that a nuclear war will cause, the committee lauded ICAN for being “a driving force in prevailing upon the world’s nations to pledge to cooperate with all relevant stakeholders in efforts to stigmatize, prohibit and eliminate nuclear weapons.” To date, 108 countries have made such a commitment, known as the Humanitarian Pledge.

The committee pointed out that 71 years have passed since the UN General Assembly, in its very first resolution, advocated the importance of nuclear disarmament and a nuclear weapon-free world. “With this year’s award, the Norwegian Nobel Committee wishes to pay tribute to ICAN for giving new momentum to the efforts to achieve this goal.” The committee expressed its “firm conviction” that “ICAN, more than anyone else, has in the past year given the efforts to achieve a world without nuclear weapons a new direction and new vigor.”

In its official statement, ICAN said that the Nobel Peace Prize for 2017 “is a tribute to the tireless efforts of many millions of campaigners and concerned citizens worldwide” who have protested against nuclear weapons and advocated for their prohibition. The award is “a tribute also to the survivors of the atomic bombings of Hiroshima and Nagasaki and victims of nuclear test explosions around the world, whose searing testimonies and unstinting advocacy were instrumental in securing this landmark agreement.”

All nine nuclear-armed states did not participate in the negotiation of the treaty; three declared that they have no intention of ever joining it: France, the United Kingdom and the United States.

The Geneva-based coalition lauded the nations that have already signed and ratified the treaty, and urged all other countries to follow suit. “[The treaty] offers a pathway forward at a time of alarming crisis. Disarmament is not a pipe dream, but an urgent humanitarian necessity.”

ICAN thanked the Norwegian Nobel Committee for awarding the coalition with the 2017 Nobel Peace Prize. “This award shines a needed light on the path the ban treaty provides towards a world free of nuclear weapons. Before it is too late, we must take that path.”

An original experience, proper of the human condition, loneliness affects us all in different ways. In entrusting Himself to the Father during the agony of Gethsemane, Jesus transformed pain into…

Give Us Today Our Daily Bread

Global hunger is a phenomenon that is increasing yearly particularly in countries wracked by conflict. In spite of Zero Hunger by 2030 as being Goal 2 of the U.N.‘s Sustainable Development Goals, it…