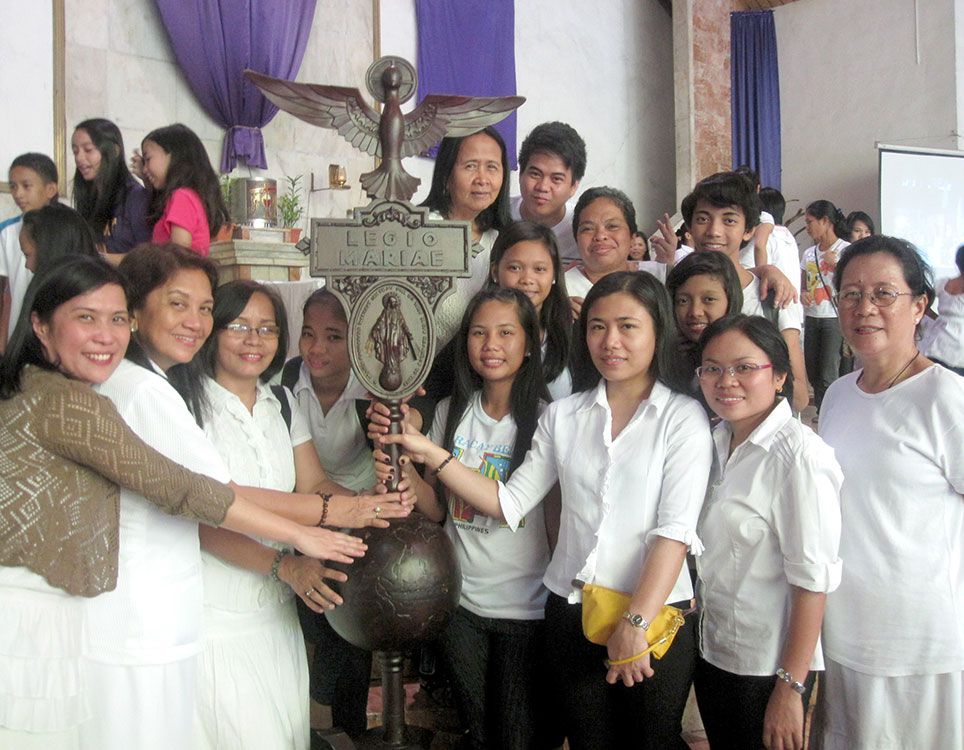 Famous for its penchant for using the terminology of the Roman army, this movement is among the oldest. Today, its members total over ten million worldwide, making it the largest apostolic organization of lay people in the Catholic Church.

My first assignment as a missionary to Uganda, East Africa, was in Kigezi, the mountainous area inhabited by the Bakiga, a tribe of strong farmers who responded enthusiastically to evangelization. It was there, going around the villages lost in the mountains, that I met the Legion of Mary, which was alive and kicking among the Catholic population.

The memory of an English girl, Edel Quinn, who had introduced the Legion in East Africa, is still vivid. Her heroic witness, especially after being affected by tuberculosis, is almost legendary. Now, Edel Quinn is a venerable and on the way to being recognized as a saint.

The Legion of Mary was founded by Frank Duff, a Catholic layman, in 1921 in Dublin, Ireland. His idea was to help Catholic lay people fulfill their baptismal  vocation to be apostles of charity in their world.

The Legion first started out by visiting women with cancer in hospitals, but it soon became active among the most destitute, notably among Dublin prostitutes. Duff subsequently laid down the system of the Legion in the Handbook of the Legion of Mary in 1928.

The Legion soon spread around the world. Today its members total over ten million worldwide, making it the largest apostolic organization of lay people in the Catholic Church. In 2014, the Legion was recognized by the Holy See as an International Association of the Faithful.

Structured And Formal
Following the terminology of the Roman Army, the basic unit of the Legion is called a Praesidium, which is normally based in a parish. The Praesidium is usually a group of 3–20 members. The Curia is the next level and it supervises several Praesidia; then comes the Comitium and eventually the Senatus which has the control of the legion in a given country. The Concilium is the highest level and has its seat in Dublin. It has control over the entire Legion.

The Praesidium normally meets weekly. The meetings are structured and formal. For all sessions, the Altar of the Legion is set up. A statue of the Virgin Mary is placed on a white tablecloth, which has Legio Mariae written on it. On the two sides of the statue are placed two vases with flowers. On the front ends of the cloth are two candlesticks with burning candles. On the right side of Mary, the Vexillum Legionis (the standard of the legion) is placed. It is made out of metal and onyx and shows the Holy Spirit in the form of a dove as well as the Miraculous Medal.

The sessions start out with prayers to the Holy Spirit and to Mary. They include five decades of the Rosary. The next part of the session includes a spiritual reading and administrative matters. The members briefly share how they fulfilled the tasks assigned to them at the previous session. They also read a chapter from the Handbook of the Legion. Then, after a spiritual exhortation, the new tasks for the legionaries are distributed and the meeting comes to an end.

A Way Of Life
The spirituality of the Legion of Mary is essentially based on the approach of Louis de Montfort, as put forward in his book, True Devotion to Mary. The book promotes a “total dedication” to Christ through devotion to the Blessed Virgin Mary, which later influenced popes such as John Paul II, who mentions it in his apostolic letter, Rosarium Virginis Mariae (The Rosary of the Virgin Mary).

The essential aim of the Legion of Mary is the sanctification of its members through prayer, the sacraments and devotion to Mary and the Trinity, and of the whole world through the apostolate of the Legion.

Frank Duff maintained that the Legion proposes a way of life more than just the doing of a particular work. It gives a formation that is meant to influence every department of life and every hour of that life.

The legionary who is only a legionary for the duration of the meeting and the work assigned to him/her is not living the spirit of the Legion. They must bring their Legion formation into their daily lives whether it be in the world of politics, finance, art, culture, trade unions, factory, business, teaching or nursing or whatever their particular way of life.

The Legion’s purpose is to help its members and all those in contact with them to live out their Christian vocation to the fullest. That vocation has its source in Baptism. By Baptism one is made another Christ or as St. Augustine puts it: “We have not only become ‘other Christs’ but Christ himself.”