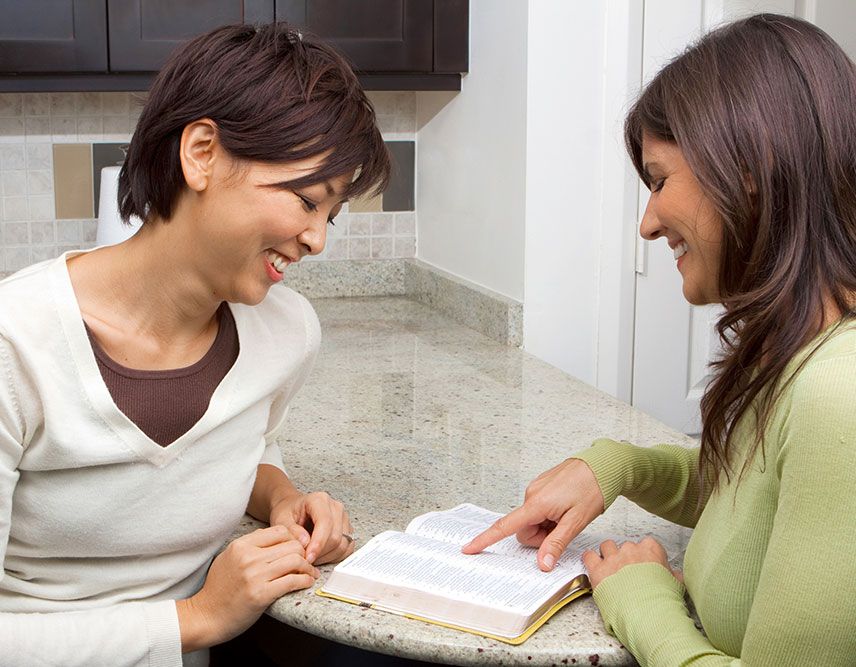 A Time to Weep, a Time to Laugh

The Bible is a serious book, but that doesn’t mean you have to avoid laughing while reading it. A Scripture scholar finds much in the Old and New Testaments to make her laugh.

Robin Gallaher Branch, author of Jereboam’s Wife: The Enduring Contributions of the Old Testament’s Least-Known Women has outlined various examples of levity in the Bible. After all, the Bible itself, in the Book of Proverbs, counsels, “A cheerful heart is a good medicine.”

And, as the Bible is replete with literary styles, the use of irony to drive home a point is frequent. “I remember one day resolving to do arduous work in 2 Chronicles,” wrote Branch, who holds a doctorate in Hebrew Studies from the University of Texas at Austin. “Studiously plowing through the reigns of Solomon through Jehoshaphat, I came to 2 Chronicles 21:20 and laughed outright. The text reads, Jehoram was thirty-two years old when he became king, and he reigned in Jerusalem eight years. He passed away, to no one’s regret…’ Evidently Jehoram was not well liked.”

The Bible even portrays God as laughing. “The wicked plot against the righteous, and gnash their teeth at them; but the Lord laughs at the wicked, for he sees that their day is coming,” we read in Psalm 37.

“Laughter here shows the impotence of the wicked and the futility of their plots and gnashing against the righteous. Why? Because, as the psalm answers, those who hope in the Lord will inherit the land and the Lord knows the wicked face a reckoning,” Branch explains.

Branch also sees humor in the finger-pointing in the midst of the Exodus. While Moses is meeting with the Lord on Mt. Sinai, the newly-liberated Hebrews are down below, worshiping a calf made of gold and declaring that it, not the Lord, led them out of Egypt.

“Neither God nor Moses wants these rowdies at this moment. Like a hot potato, responsibility for the former slaves passes back and forth between them,” Branch summarized. “The Lord swaps first, telling Moses the reveling Israelites are ‘your people.’ But Moses quickly catches on.

He declines association with them. As far as Moses is concerned, these people are not his! Morphing into intercession mode and speaking in what no doubt is a respectful tone, Moses rejoins, ‘O, Lord, why should your anger burn against your people, whom you brought out of Egypt with great power and a mighty hand?’”

Humor In The New Testament
Branch finds humor in the New Testament too, and in places and ways one might not expect. The very fact that 5,000 people were so taken with the personality of Jesus that they followed him into the wilderness, completely forgetting to bring food along (leading to the multiplication of loaves and fishes), is meant to incite a chuckle, in Branch’s view.

Food and eating habits is another source of humor, as Jesus raises a girl from the dead. “In the home of Jairus, a synagogue ruler, Jesus uses practical knowledge to break a tense situation,” Branch writes.

After Jesus commands Jairus’ 12-year-old daughter, Talitha koum! which means, “Little girl, I say to you, get up!” and the girl gets up and walks around the room, those in the room are “completely astonished.” No kidding. Does Jesus revel in their amazement at His powers? No, He tells them to give her something to eat.

Says Branch, “A natural human reaction—when grief is turned to unexpected joy as when a dead girl is brought back to life—is something loud like laughter or shouting. Here, Jesus cracks a joke by reminding everybody that a girl who has been sick, experienced death, and is now alive is hungry! Of course she needs to eat! All twelve-year-olds have ravenous appetites! This practical, timely and kind statement from Jesus breaks all the tension, pent-up grief and amazement present in the room among the girl’s parents and Jesus’ three disciples.”

If her view of the Gospel story is valid, it falls in line with an old custom known as the risus paschalis—the Easter laugh. Christ’s own Resurrection from death is a cause for joy, as was this girl’s—so much so that some priests in the 15th century sprinkled their Easter homilies with humor, encouraging laughter during the Easter season.  Published in Aleteia.

The worsening economic and political situation, the Church’s resistance to dictatorship, the growing capacity of the underground and mass movements and the assassination of opposition Senator Benigno…

Compassion fatigue in the world today

These days, newspapers and news programs are teeming with stories of indifference, cruelty, and injustice of man against his fellowman. When stories of honesty, kindness, or compassion do make it to…