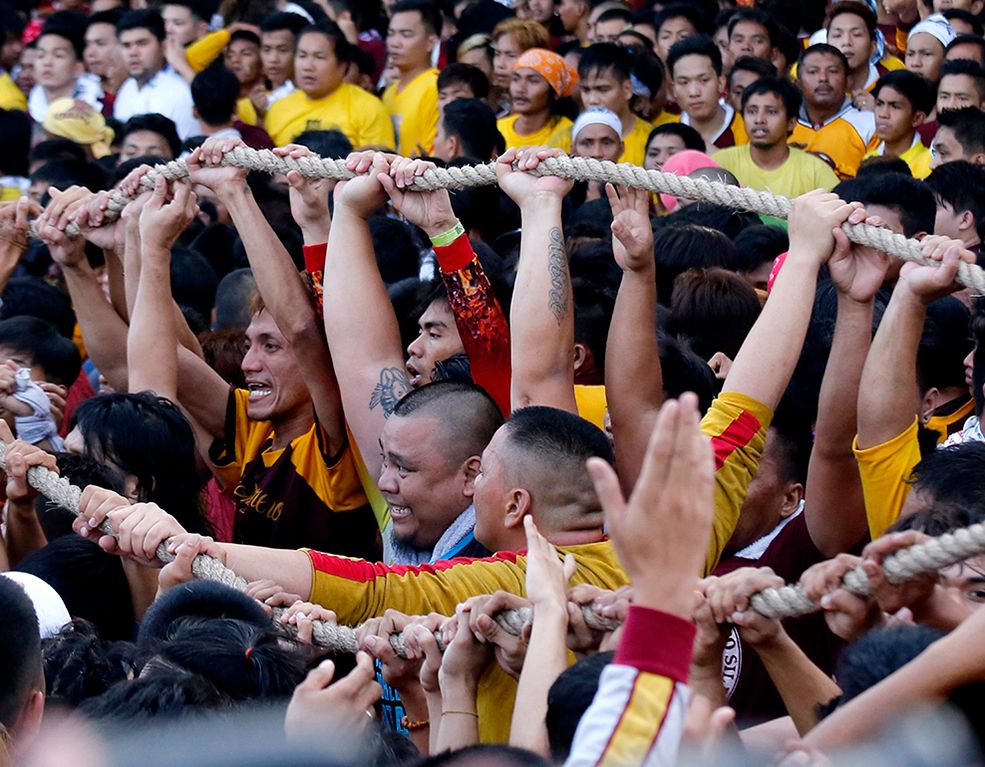 By Celia M. Bonilla | UP Manila

The Traslacion is held every January 9 on the feast of the Black Nazarene. It is a spectacular and even scary mammoth, with a seven-kilometer long procession attracting between a million to 1.5 million devotees. What are the reasons for such a show of devotion seemingly edging on fanaticism and idolatry?

“You can climb to the andas by first inserting yourself into the moving crowd from the side, going in through the softest part of the guys, the stomach or abdominal region, and walk with them with the same cadence, not missing a beat, but making your way to the andas,” advised a devotee who is an Ateneo graduate and now chief executive officer and owner of a marketing company. He has been joining this procession to continue what his father did for him when, as a child, he had almost died from his asthma attack.

Another devotee, a former boxer, said the way to go up the andas is by tapping on the shoulders of the guy in front who would then lower himself to allow you to hoist yourself up onto his back and step on him. Then you can balance yourself on the shoulders of other devotees until you get to the andas, where someone hauls you (under a hail of towels) up to be able to kiss or touch the Black Nazarene.

Sense Of Oneness
Throngs of devotees who join these annual processions are barefoot, with no watches, rings, or anything sharp that can hurt the next guy. Only towels across their shoulders and stuck inside their shirts serve to cushion the force from the front and back. Inside such a crowd, one breathes by raising one’s head, coming up for air as if swimming in this sea of humanity. But a strong sense of oneness operates among those in the procession.

Everyone should move in the same rhythm, in the same direction. In that bind, there are no chief executive officers, lawyers, medical doctors, professors, janitors, farmers, landowners, laborers, or even criminals, and what-not. Everyone is simply a devotee imbued with the single-mindedness of his promise or panata.

The shouting of ocho could be heard now and then to warn people that the rope has started to sag and loop dangerously. They would therefore have to make the rope taut before an arm or a neck gets caught in the loop.

Two Images Of The Nazarene
The Black Nazarene has easily upstaged the titular patron saint of the church, John the Baptist, who said that Christ “must increase while I must decrease.” There are, in fact, two images now of the Nazarene from the original image from Mexico: 1) the high altar image and 2) the processional image. The head of the original Black Nazarene commands the Church from the high altar underneath the baldachin, with its body made of molave (Philippine timber tree).

But the original torso and limbs became part of the processional image. This is to preserve the 17th century image from further deterioration, since centuries of procession and touching have seen it fall off its float or andas, get soaked in the rain and sustain cracks here and there.

This is according to the sculptor Narciso “Ner” Maglaqui, who was tasked by then parish priest Fr. Jose Abriol in the 1980s during renovation of the church. Maglaqui is one of the devotees I interviewed for his experiences as a devotee. He said he had to first ask the permission of the Señor to somewhat dismember him because at his first attempt, the Señor “avoided” his grasp, and he ended up cutting himself.

Of course, there are other life-size replicas and smaller ones inside the church, and devotees even bring their own replicas to the church on a day set just for the procession of replicas within the novena as a run-up to the January 9 Traslacion.

But why do people express their devotion beyond the usual liturgical rites, like the Holy Mass or just praying the Rosary or something?

Values Of The Devotion
In my graduate thesis, I interviewed devotees over the years, and I drew up what I term as aesthetics or embodied values of the devotion in Quiapo.

The first embodied value is a strong sense of identification with the dark and cross-carrying Jesus Christ of Nazareth, given Filipinos’ complexion in general and the devotees’ own metaphorical crosses, their burdens and problems. “Maamo naman ang mukha maski maitim. (His face looks gentle, though dark.)” Men especially find this pose macho or oozing with a masculine orientation to sacrifice.

The second is the sense of personal miracle or Milagro that devotees felt. Fred Salandanan, a sacristan since the 1960s, said it was just a job at first, but later he was so moved by the faith of people that he would encourage others to hang on to their faith in the Nazarene.

“Huwag kayong bibitaw sa Kanya. (Don’t let go of Him.)” He realized the Senyor’s or the Lord’s power when his children were getting sick one after the other, and there would always be a benefactor who would show up to express his or her gratitude to the Black Nazarene.

And Fred would be given a hefty token of their gratitude, like a lady who came back from her prosperous stint abroad which was a favor from the Nazarene. And then there was this stalwart devotee since the Japanese period called Mr. Paar.

Businessman Rudy Paar was a lone survivor of a train crash during World War II when he was smuggling tobacco through Japanese lines. He said the last thing he could remember before he lost consciousness was a dark face that turned out to be the statue inside the Quiapo Church where he got married: the Black Nazarene.

From there on he promised to work honestly. When his business in auto seat and mattresses picked up, he promised to finance the repair of the andas, or the float. It was something then parish priest Msg. Jose Abriol said only the prominent families can do.

“Bakit, mayaman ka ba na kaya mo? (Why? Are you rich enough to do that?)” But Paar insisted, and he kept his word. He continued caring for other needs of the church, like the yearly Christmas lighting. Mr. Paar said he had set aside his treasury bill investment exclusively for the Nazarene.

This devotional practice is not unlike the way people in the provinces dedicate the yield from a particular piece of land for the needs of the patron saint. Paar declared: “Ibig kong paglingkuran ang lahat ng naglilingkod sa Kanya. (I want to serve all those who serve Him.)” Paar has had ten heart attacks throughout his life of work and devotion.

For my friend Narciso “Ner” Maglaqui, it was the precarious pregnancy of his wife that zoned him out while walking aimlessly. He later found himself right in front of the foot of the Nazarene behind the high altar. He did not know how he got there, worried and dazed that he was from thinking about his wife and the expensive caesarian section she would undergo. When he got home, he was told his wife had a normal delivery.

In subsequent months, he got more commissions for sculptures and their financial situation improved. They were also given more space for his shop and eventually for their own home inside the Nakpil house along Bautista street, where his wife grew up being the daughter of the housekeeper.

Ner has since been joining the mammoth processions with his brothers-in-law, often on the andas itself and to keep the Black Nazarene in place. “Mahirap humiling sa Senyor, pero pag pinagbigyan ka, magsasawa ka. (It’s tough praying to the Señor, but once He grants you favors, you’d feel pampered.)”

Disposition To Believe
Milagro or a sense of personal miracle (big or small favor) is an embodied value that comes into play. It may come in various forms and contexts, but at its core is a strange sense of the gap between their understanding of what is logical and what is absurd in their time of crises. And what bridges the gap, according to the narratives, is their faith, their disposition to believe.

This brings us to the third embodied value, the personal vow or promise to reciprocate to express their gratitude or the panata. This could be praying in the Holy Mass, donating money and services, like volunteering to clean the church, and/or joining a grueling procession to express one’s devotion in a most visceral way.

And in a way, this rounds off and brings us to the first, the sense of identification with the Senyor, because this enforces and extends to all the other devotees who share such a conviction coming to a sense of community and oneness in this devotion to the Black Nazarene.