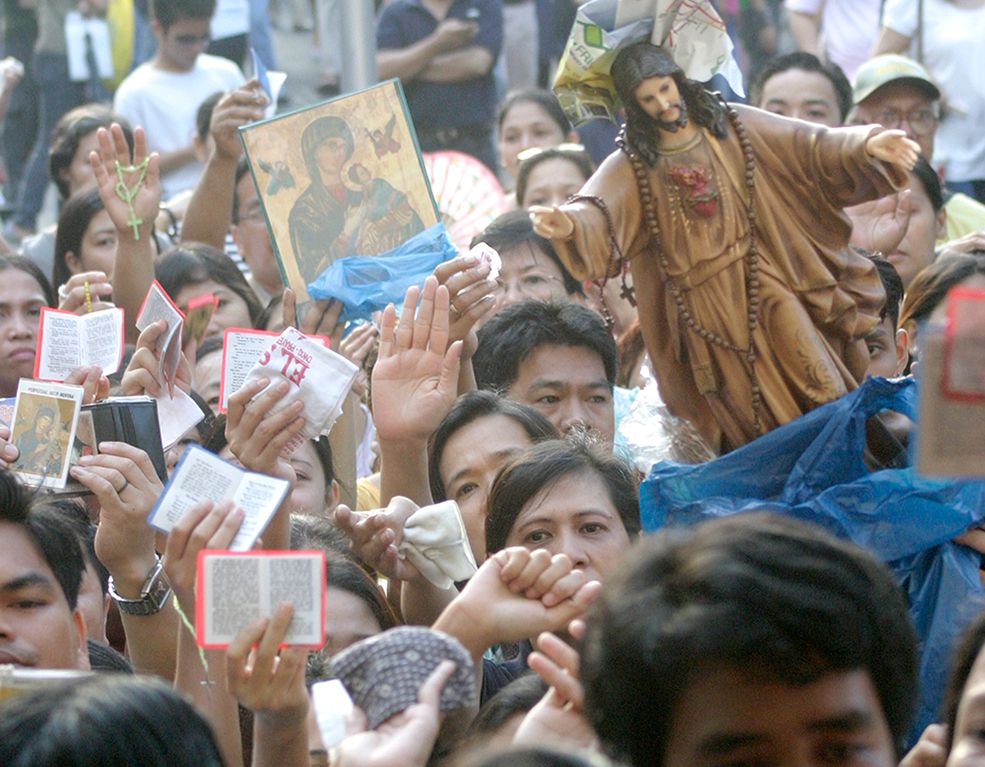 Aside from East Timor, the Philippines is the only Catholic country in Asia. With religious faith, we have become devotees of various Christian traditions. To name a few, there are devotions to the Holy Blessed Mother Virgin Mary, the Holy Child and to our Lord and Savior, Jesus Christ.

Christianity in the Philippines had its beginnings in 1500’s at Cebu when we were colonized by the Spaniards. The conquistador, Ferdinand Magellan, brought the wooden Cross of Jesus and thus became known as the Magellan’s Cross. Under the Spanish rule, they converted and evangelized a big number of Filipinos to Christianity. Would you believe that at this day and age, there are still people who would chip away parts of its wood as a souvenir and believing it can perform miracles?  It goes to show the strong belief that Filipinos have as devotees.

One of the most known religious traditions that we have in our country would be the Holy Week activities. To show their love for Jesus and His suffering, the extreme devotees would be imitating and re-enacting the Passion of Jesus Christ.  We have Penitensiya wherein an individual carries a life-sized wooden Cross, walks bare feet (bruised) and hits themselves with a thorned whip, bleeding.

Others reach the point of having themselves nailed. However, not everyone does that.  Why does a person put himself through this hurtful religious ritual?  Their common answer is that it is their way of showing God that they want to repent for their sins.

Visitation Of Seven Churches
Visita Altares also known as Visita Iglesia has become one of the religious traditions of Catholics on Holy Week. It involves the visitation of seven Churches on Maundy Thursday.  Filipino devotees give patronage to the Altar of our Lord and Savior, Jesus Christ, in the Blessed Sacrament.

Why seven?  To signify the seven last words of Jesus.  However, some would argue that its origins were taken from the tradition of St. Philip Neri when they visited seven Basilicas in Rome. There is also the story from the Book of Revelation wherein an Angel acted as medium to John of Patmos who was instructed by the Messiah to write a scroll and send it to seven Churches, namely:  Ephesus, Smyrna, Pergamum, Thyatira, Sardis, Philadelphia and Laodicea.  Regardless of where it started, it symbolizes the faith we have in God’s Living Word.

Salubong On Easter Sunday
Salubong on the early morning of Easter Sunday’s celebrations became one of the popular Catholic traditions especially among the youngsters.  Between four to five in the morning, an Angel would come down.  Children would be chosen as angels dressed in white, with complete wings.  The Angel would meet Mama Mary and lifts up Her veil, signifying Her Assumption to Heaven.  Also, the men would form a group different from the women on the other side. They would salubong which means to come together.

I have witnessed this firsthand when my family went to the province and saw a lot of people in attendance. People rejoiced jubilantly because Jesus has risen!

Santo Niño De Cebu
With the Magellan Cross, the image of the Santo Niño de Cebu is the Philippines’ most antique Catholic relic. Annually, there is a feast celebration of a street dance festival called Sinulog honoring the Holy Child, baby Jesus, on the third Sunday of January.

Drawing crowds with the heavy beat of drums and in multi-colored outfits for the dancers, the Sto. Niño is adorned in traditional red or yellow attire, the primary colors on which it was clothed when it was brought here by Magellan back in 1521 as a baptismal gift to Rajah Humabon.

Different statues of the Sto. Niño can be found in a typical Filipino household.  The way the Sto. Niño is dressed represents varied prayer intentions.  There are families who participate in the Novena masses and procession.  Some would have their own children dressed as the Sto. Niño.   As a family-oriented nation, we have strong devotion to the Holy Child, the Sto. Niño, because of the importance and caring love we have for children.

Our Lady Of Peñafrancia
In Bicol, we give homage to the Patroness and Queen of Bicolandia, the Lady of Peñafrancia.  Guided by an apparition and voice in his dreams, there is a long history of its origins that began in Spain when Simon Vela searched for a place called Peña de Francia and found the shrine of the Blessed Virgin Mary.

With workers, he was tasked to build a dwelling abode for the Lady who granted them with healing miracles from their sickness. Later on, a Spanish family migrated to the Philippines whose son, Miguel de Cabarrubias, became a living testament of the miracles and blessings of the Virgin of Peñafrancia.

Vowing to erect a stone Church for the Lady in gratitude, this finally came to realization in Naga City, Bicol. Unfortunately, the image was stolen on August 15, 1981.  Thankfully, it was returned.  Up to now, the Bicolanos continue to live up to their devotion to Our Lady of Peñafrancia with a Novena and fluvial procession on a barge (boat) at Naga River.  They chant:  “Viva La Virgen!”  At present, the Heavenly Mother is enshrined at Basilica Minore, Calle Balatas, Naga City.

Now, more than ever, we need to relive the traditions we have as Christians. Lest we forget it, history molds the nation. As unwavering believers, we are devotees on practicing the teachings of the Messiah. We need to remember the greatest and most unconditional love of God, Mama Mary and the Lord and Savior, Jesus Christ.

In Indonesia, with its mainly Muslim population, seminaries are overcrowded with candidates. On the island of Flores lies the world’s largest seminary. More than 1,000 students study at Ledalero, and…