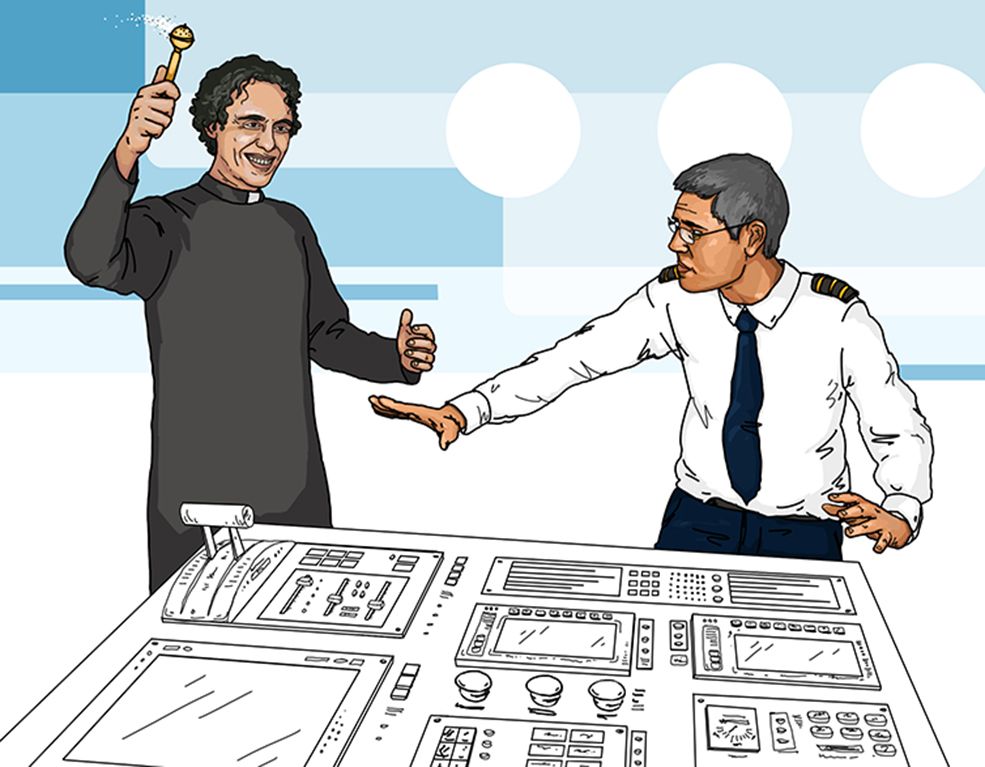 A few years ago, I received an invitation from an Italian shipowner to bless his newly bought ship here in Korea. He convinced me with the offer of taking me to the spot by helicopter. I accepted because to fly in a helicopter had been my dream. I forgot my duties with the children and with the homeless in the canteen and hastened to reply: “Ok, I’ll go.”

On the designated day, I boarded the helicopter. Almost magically, it took off and flew freely and beautifully in the sky. I was excited. It landed in a square in front of a supertanker, 220 meters long and weighing 150,000 tonnes. I felt like Alice in Wonderland! Everything seemed to be a fairy tale.

The celebration began with the Italian national anthem followed by the official ceremony, the christening and launching of the ship as the champagne bottle was smashed on its bow, and a fireworks display! Then followed a big party.

Afterwards, we climbed aboard the ship and the captain, proud of his jewel, explained all the features of the vessel and its highly sophisticated electronic equipment and added: “Since this giant of the seas is operated only by computers, radars, and GPS, it takes only two people to navigate it. The captain’s job is just to ensure that no unforeseeable problems arise”.

After the short briefing, it was time for the priest to bless the command room. I said the proper prayers and moved on to sprinkle the deck with such great enthusiasm and faith that I poured rivers of holy water onto the guests and on the ship.

The captain approached with a frowning face and said: “Father, with all due respect for your holy water, if any drop of it fell on these devices, you may have caused millions in damages. For goodness sake, I personally trust these hi-tech gadgets more than your pompous blessing. Next time, please try to be more cautious in sprinkling a ship’s command post.”

Those words made me feel bad. For me, the blessing was a sign of God’s power that was being poured on the vessel for its protection while for the captain it was just a source of concern and anxiety. I realized that holy water is only a sign which may have no more meaning for many people. At least, I was relieved not to have damaged the ship.