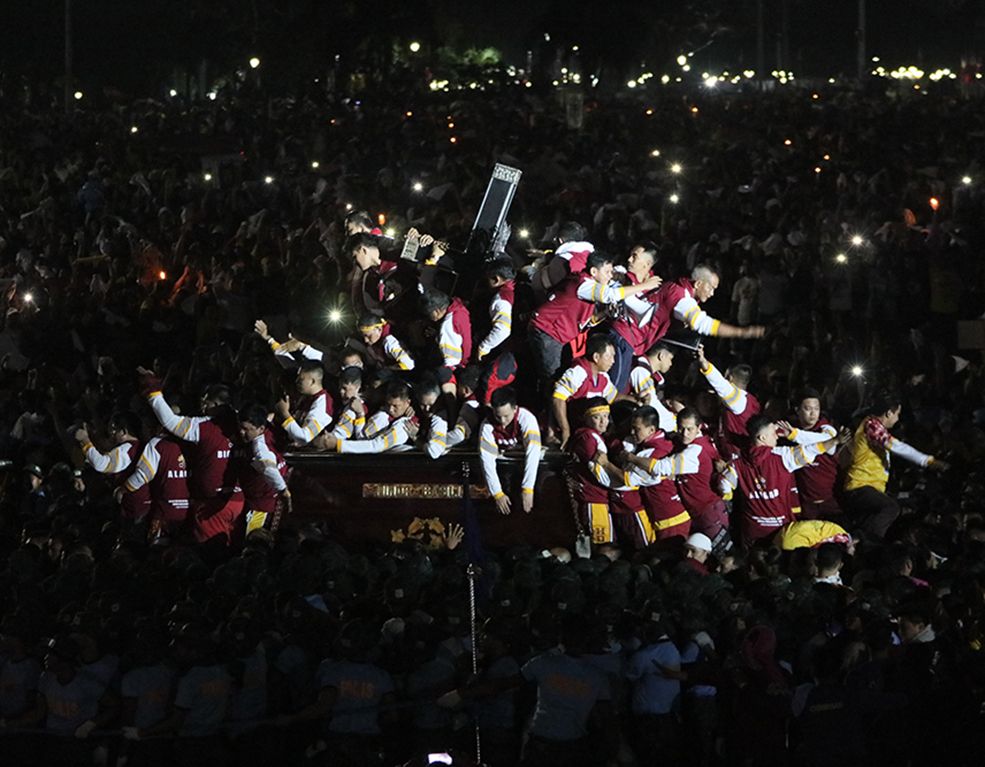 A Question of Quiapo Faith

By Celia M. Bonilla | Up Manila

Even though the grand procession of the image of the Black Nazarene has been canceled this year due to coronavirus, the devotion to the centuries-old icon of Jesus Christ is unique in the world. Prof. Celia M. Bonilla traces the origins and developments of such deeply-rooted Filipino tradition.

The devotion to the Black Nazarene started in serendipitous way. According to a popular tradition that cites the Cronicas de la Provincia de San Gregorio by Fray Juan San Antonio, the Black Nazarene arrived in the Philippine shores on May 31, 1606, during the time of the Galleon Trade (1565-1815).

Back in 1578, Quiapo itself was only part of the Franciscan mission town of Santa Ana de Sapa (literally St. Ann of the Creek), which extended all the way to the south of the Pasig River.

Quiapo got its name from the water cabbage called kiyapo which abounded in its estuaries and rivulets that ran through the islets. The district became a town on its own right on August 29, 1586, when Governor-General Santiago de Vera granted the petition of the Franciscan Prelado Superior Pedro Bautista (who was later martyred in Japan in 1596) to make Quiapo a separate town.

The Prelate designated Antonio de Nombella as the first curate of this new parish dedicated to the Sweetest Name of Jesus. Its first structure rose in 1592, made of nipa or thatch and bamboo. In 1598, the Franciscans relinquished control of this extramuros parish (that is, outside of the walled city of Manila proper) to the Archbishop of Manila, who turned it into its Secretariat and made St. John the Baptist its titular saint.

Artistic Excellence
Trade picked up partly as an offshoot of evangelization initiated by the Franciscans, succeeded by secular priests, then for three years by the Jesuits, and henceforth carried on by diocesan priests. Religious sculptures, paintings, engravings, and books were produced by the people in the vicinity, building a reputation for artistic excellence and prestige. Other inhabitants of Quiapo also became wage-earners in Intramuros across the Pasig River, imbibing its culture and sharing its economic fruits.

Centuries have seen the church rebuilt as a sturdier church of stone after the thatch and rattan structure was gutted by fire. But this too was demolished in a major earthquake in the 1880s.

Three more calamities saw it rebuilt, like the one by Philippine National Artist for Architecture Juan Nakpil in the early 1900s after another fire. Nakpil also donated the canopy or baldachino over the Black Nazarene. The present structure, renovated in 1987, has had its nave expanded designed by Architect Jose Maria Zaragoza, a disciple of Nakpil. The church is now also designated as the Minor Basilica of the Black Nazarene.

Augustinian Recollects
The Black Nazarene came on May 31, 1606, from Mexico. Again, popular stories have it that when a galleon ship got stranded in Mexico due to inclement weather, its officers and crewmen (Spaniards and Filipinos alike) prayed in a church where the Black Nazarene was. But since it was hard to convince its crew to sail back over the Pacific Ocean, the captain asked the parish priest of the church to allow his men to bring with them the statue of the cross-carrying Christ so they would be accompanied through the squalls and dangers of the Pacific Ocean.

The church could have been entrusted to the Order of Augustinian Recollects (OAR) as ten or so friars from that order brought the Black Nazarene officially. Upon reaching the ports of Cavite, the Augustinian Recollects took care of sheltering the statue in what was to be their initial evangelization territory, Cavite Puerto, where the galleon ships docked and where trade was brisk.

When they brought it to Manila, it first found its niche in a church dedicated to St. John the Baptist just outside Intramuros in Bagumbayan (now Luneta). After two years, it was transferred to the OAR’s grander church inside the walls dedicated to San Nicolas de Tolentino.

The Recollects were also recorded to have brought other images from the stations of the cross, like the Agony in the Garden, the Scourging at the Pillar, and the Crowning with Thorns. But apparently, the Nazareno or this Cross-carrying Christ is the one that got popular attention and devotion.

The Black Nazarene is a life-sized statue of Jesus Christ usually genuflecting on his left knee, with his right shoulder bearing the cross. He is robed in brocaded maroon (or even the intricate estofadong burda, literally stuffed embroidery) or velvet with collar and sleeves accented with white or yellow ruffs reminiscent of the court of Philip II.

On his head is a crown of thorns with three potencias of beaten gold suggesting divine radiance. The image is of dark hardwood made even darker through years of wiping with rose oil and perfume. The original image could well be of dark mahogany or ebony (ironwood or kamagong), or black mesquite, which was prevalent as material for sacred images in South America.

One of the more dubious claims is one from a website on Philippine festivals and Wikipedia that it was of ivory when it sailed from Mexico but got to Philippine shore as black as it is now after supposedly surviving a ship fire. The statue is not of ivory but of dark ironwood like the Philippine kamagong.

Within two decades of its arrival, the Recollects had promoted such a lively devotion to the cross-bearing Christ. On April 20, 1621, Pope Innocent X authorized the veneration of the Black Nazarene. In 1650, the Pope subsequently recognized the Confraternity of Our Lord Jesus of Nazareth (Cofradía de Nuestro Santo Jesús Nazareno). On January 9, 1787, Bishop of Manila Basilio Sancho de Santas Junta y Rufina had it transferred to Quiapo Church or Parish of St. John the Baptist.

Nazarene In Quiapo
One of the legends that went around was how the Black Nazarene “chose” Quiapo church for his shrine. According to some devotees, in one of the New Year processions, the people were bearing the image when it rained. They waited inside the church for the rain to subside. But when they were about to resume the procession, the bearers were surprised to find the image unbearably heavy. Devotees concluded that the image refused to leave the church.

But of course, it was just one of those legends, almost as improbable as the ivory turning ebony black in a fire. Another recent discovery for me is a claim that the Black Nazarene in the Quiapo Church is but a replica and not the first one that accompanied the agitated galleon crew on the trip back from Mexico.

The Recollects supposed to have ordered a second Black Nazarene from Mexico, also of mesquite carved by a Mexican artisan, in order to leave one to the St. John the Baptist extramuros church in Bagumbayan. This was to be the one that would be transferred to Quiapo Church, which also happened to be dedicated to St. John the Baptist.

Now whether or not the Black Nazarene in Quiapo is the first statue from Mexico, it is clear that this widely popular devotion came from Mexico. But just to confirm this notion, I have been talking to some Mexicans online, by phone, and in-person to ask if there is also a devotion to the Black Nazarene in Mexico, where the sacred statue came from.

One priest from Oaxaca said the images of the Nazarene he saw in Mexico were usually fairer, and that they are only brought out on procession during Holy Week. Another priest, a Comboni missionary, validated that he saw such a Black Nazarene right in the Zocalo Cathedral or the Metropolitan Cathedral of the Assumption of Mary in Mexico City. Though a lot of people show their devotion in the Lenten procession, lighting candles, and offering flowers, the processions are not as spectacular as it is here in Manila.

Traslacion
The procession used to just go through the streets surrounding the Quiapo church, notably passing the houses of the rich sponsors which were usually closer to the church. But with the passing of decades, centuries even, the number of people who attend the procession grew exponentially, necessitating a bigger place in which to move.

Thus, on the 400th anniversary of the transfer of the Black Nazarene to Quiapo, the church authorities decided to expand the procession to the general vicinity of Bagumbayan or Luneta, where its first niche was in the church of St. John the Baptist, which is now no more.

We often think of holiness as something that is only available to some who, by their vocation, are “predestined” to a path of holiness. On the contrary, holiness is a free gift to all. In this way, it…