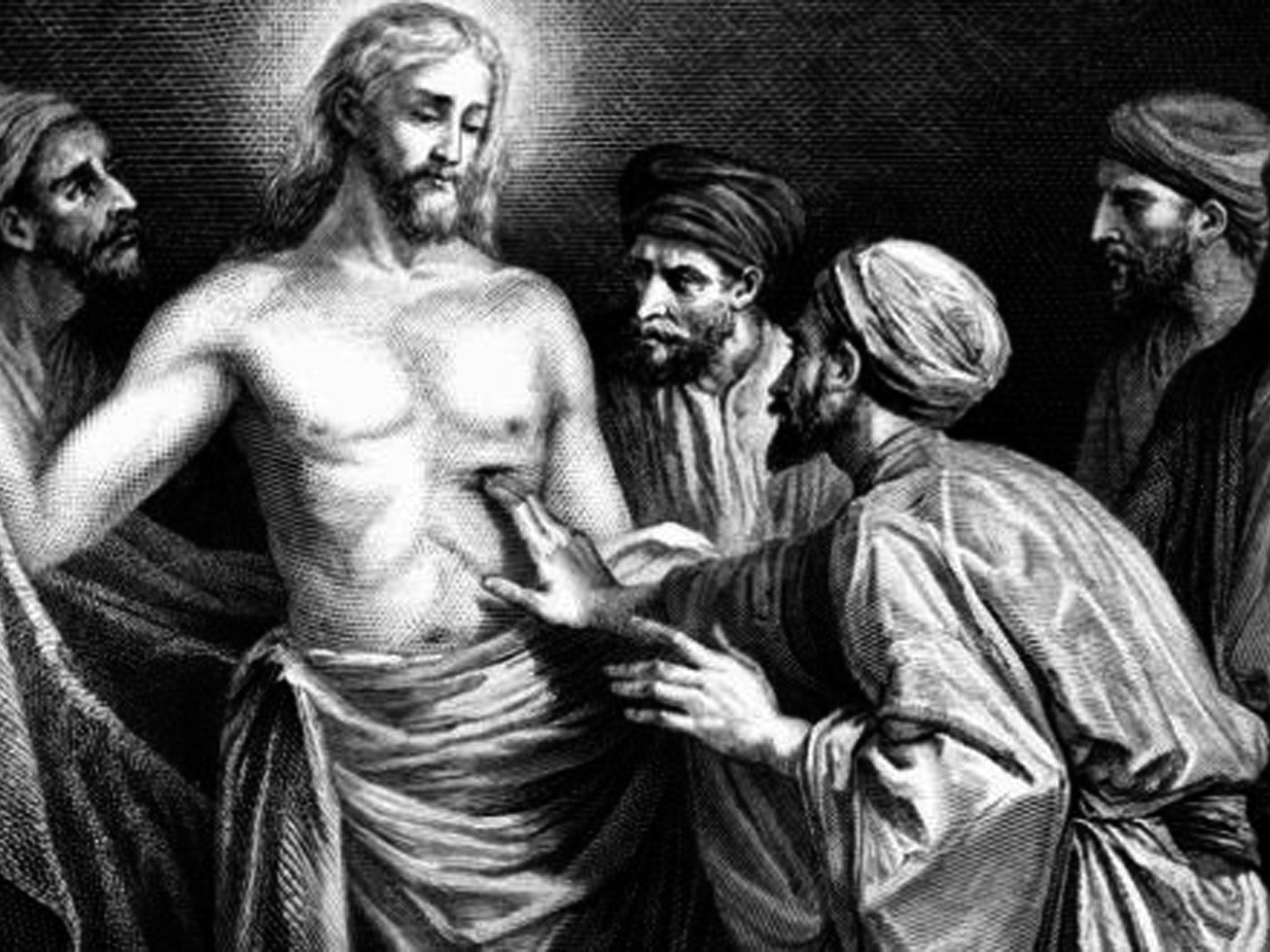 The apostle and his mysterious twin

On July 3, we celebrate the Feast of St. Thomas, famous for his proverbial incredulity, which in some way, makes him likeable, close to us, a “real” character” (Jn 20:19-29).

We know little or nothing about the origins of St. Thomas. Perhaps, like some of the apostles, he was a fisherman on Lake Galilee (cf. Jn 21:2). What we know about him comes especially from the Gospel of St. John. Synoptically, he only appears in the list of the twelve apostles (Mt 10:3; Mk 3:18; Lk 6:15).

His name, Thomas, means “double” or “twin” (from the Hebrew root Ta’am, Dídimo in Greek). Thomas has a prominent position amongst the apostles. The Acts and the Gospel of Thomas, an apocryphal of the 4th century, which Benedict XVI regarded in 2006 as being “important for the study of Christian origins,” was attributed to him.

According to tradition, Thomas was the first person to bring the Gospel to India. Christians from the State of Kerala (coast of Malabar, in Southern India) follow his preaching. They are the “Saint Thomas' Christians,” that the Portuguese found when they arrived in India.

The book of the Acts of Thomas describes his being sent on a mission in an unusual manner. When the apostles subdivided the regions of the world to evangelize, India fell to the lot of Thomas. However, he didn’t want to go there. Jesus appeared to him in dreams, encouraging him: “Do not fear, Thomas. My grace will accompany you,” but to no avail. Not even Jesus managed to change his mind! “Send me anywhere, Lord. It’s just India I don’t want to go to!” The following day, Jesus…sold him as a slave to an Indian navigator who was a tradesman, looking for a builder (St. Thomas is the patron saint of architects!) and, against his will, he had to set sail for India!

Thomas in the Gospel of John

Thomas appears four times in the Gospel of John. His name is one of those most mentioned amongst the apostles. His first intervention shows his readiness to follow Jesus even to death, when Jesus decides to return to Judea after the death of Lazarus, even though the Jews were looking for him to kill him. Faced with Jesus’ firmness, Thomas incites the group to accompany him: “'Let us also go to die with him.” (Jn 11:16). Here, Thomas comes across as generous, determined to share his Master’s destiny.

The second intervention is during the Last Supper. Jesus says He is going to prepare a place for them and comments that the apostles already know the path He is going to take. Thomas, always ready to follow Jesus but also a pragmatic man, exclaims: “Lord, we do not know where you are going, so how can we know the way?” (Jn 14:5). Thomas’ reaction has afforded us the famous synopsis that Jesus gives of His identity: “I am the Way, the Truth and the Life” (Jn 14:6).

The third intervention is what is going to “stigmatize” Thomas as “incredulous” and fearful. He is not happy with “secondhand” news about Jesus’ resurrection and needed to “see” and “touch” the wounds of Jesus Crucified. Jesus pays a second visit to the group at the Cenacle, a visit seemingly exclusively for Thomas, given that in His first appearance, He had already issued His missionary mandate and given the Spirit (Jn 20:19-23). Facing his Master, Thomas proclaims “the most sublime profession of faith of all the New Testament” (Benedict XVI): “My Lord and my God” (Jn 20:28). And Jesus proclaims His last beatitude: “Blessed are those who have not seen and yet believe” (Jn 20:29).

In the fourth intervention, only Thomas’ name is mentioned in the list of the seven who go fishing with Peter (Jn 21:2). He appeared at Peter’s side, another sign of the importance attributed to him.

The name of Thomas, “double” or “twin” is particularly significant. The Gospel of John highlights it three times (Jn 11:16; 20:24; 21:2). The fact of being a twin did not just give him the “name,” but “labeled him” also in his life as a disciple and apostle.

The apocryphal book of the Acts of Thomas (which relates in a colorful way the apostolate of Thomas, also known as “Judas Thomas”) states that, at one time, Jesus appears to introduce Himself as Thomas’ “brother” (Nº. 11). Later on, through the mouth of a donkey (related to Balaam’s mule in Num 22:28), Thomas is said to be the “twin brother of Christ” (Nº. 39).

It is a way of highlighting the close relationship between Jesus and this apostle. In fact, from calling them “servants,” Jesus goes on to call His apostles “friends” (Jn 15:15) and, after His resurrection, “brothers” (20:17). The category of “twin” (spiritual) adds a further sign of communion with Christ.

Twins have always been a human phenomenon that awakens our curiosity and stirs up our collective imagination. We would also like to know who Thomas’ twin is. In my view, it could be Nathanael (Bartholomew). In fact, Thomas’ last profession of faith appears to correspond with the first made by Nathanael at the beginning of the Gospel (Jn 1:45-51). Moreover, their character and behavior are surprisingly similar. Finally, the two names appear relatively close together in the list of the Twelve (see Mt 10, 3 and Acts 1:13).

This lack of knowledge leaves room for many to say that Thomas is “the twin of each of us” (D. Tonino Bello). Thomas comforts us in our moments of doubt as believers. In him, we are mirrored and, through his eyes and his hands, we also “see” and “feel” the body of the Resurrected, an interpretation that is fascinating in itself!

In the Bible, the most famous twins are Esau and Jacob (Gen 25:24-28), eternal antagonists, an expression of the dichotomy and polarity of the human condition.

Could it not be that Thomas (the “double”) carries inside him this antagonistic duality? At times, he is capable of gestures of great generosity and daringness but, at other times, shows incredulity and obstinacy. But, confronted by His Master, his identity as a deep believer re-emerges, proclaiming his faith with conviction and without hesitation.

Thomas carries inside him his “twin.” The apocryphal Gospel of Thomas underlines this duplication: “On the day when you were one, you became two” (No. 11).

Thomas represents all of us. We all carry inside us this “twin,” inflexible and stubborn in his ideas, obstinate and capricious in his attitude. We are inwardly divided.

St. Paul reflected on this human reality of “duplication.” He, who seemed to be made from one piece, also experienced it: “I do not understand my own behavior; I do not act as I mean to, but I do things that I hate” (Rom 7:15). Paul identified the identity of the “twins” that are in us. One is inherited from the “old Adam.” The second comes from the “new Adam,” Jesus Christ, the new Child we receive at Baptism.

These two contrasting realities or “creations” go badly together, sometimes at open war, in our heart, compromising our personal identity and our inner serenity. Who has not experienced the suffering of this inner laceration?

But Thomas had the courage to confront this reality. He brought out his gloomy, adverse, “incredulous” side, and confronted Jesus. He accepted the challenge set by his inner “rebel,” that he had to see and touch to believe….and eventually came to Jesus. Faced with the evidence, the “miracle” then happened: the “two” Thomases became “one” and proclaimed the same faith: “My Lord and my God!”

Unfortunately, this is not what happens to us. Our Christian communities are almost exclusively frequented by good and submissive “twins” as well as …those who are passive and amorphous! Their bodies lack spunk! They are not “wholly” there. The energetic, instinctive part, which would need to be evangelized, does not appear at the “meeting.” Jesus said that He came for sinners, but our churches are frequented by “upright people” who…do not feel the need to be converted! The one who should be converted, the other twin, the “sinner,” is left quietly at home. It’s Sunday, an excuse to “rest” and entrust the day to the “good brother.” On Monday, the twin with instincts and passions will be in good form and be back in charge!

As the Good Shepherd, Jesus continuously seeks out many Thomases! In the Sunday celebration, it is especially them the Lord comes to find! These will be His “twins!”

God is looking for “real” men and women, who relate to Him as they are: sinners, who “suffer” in their flesh and in the tyranny of their instincts, believers who are not embarrassed to attend Mass, even with that incredulous part of them resistant to the grace. They don’t come to look good in the “assembly of the believers” but to find themselves with the sublime Doctor, to be cured. Jesus becomes a brother to them!

The world needs the testimony of honest believers, capable of recognizing their own mistakes, doubts and difficulties, who don’t hide their own “duplication” behind a façade of pharisaical “respectability!”

The mission also needs apostles who are genuine people and not “twisted and blinded” missionaries who can see for themselves the reality of suffering and touch with their hands the wounds of the crucified of today, capable of being indignant when they see injustice, of facing evil in the light of faith, and also with the strength and determination of a “complete” person who reacts with his head and his heart, with his soul and “out of instinct.”

The call to become a bridge

Moses was the bridge between God and His people. Such is the vocation of each one who is called by the Lord to be a missionary; that is, to live in total solidarity with God, for whom one acts as a…

Martha and Mary are frequently presented as contrasting examples of action and prayer. Because of this comparison, one is led to ask who between them is the best. This question has animated spiritual…

Call to holiness for everybody

The month of November begins with the solemnity of All Saints, followed by the commemoration of the Faithful Departed. These celebrations invite us to cultivate the “communion of the saints”; to…