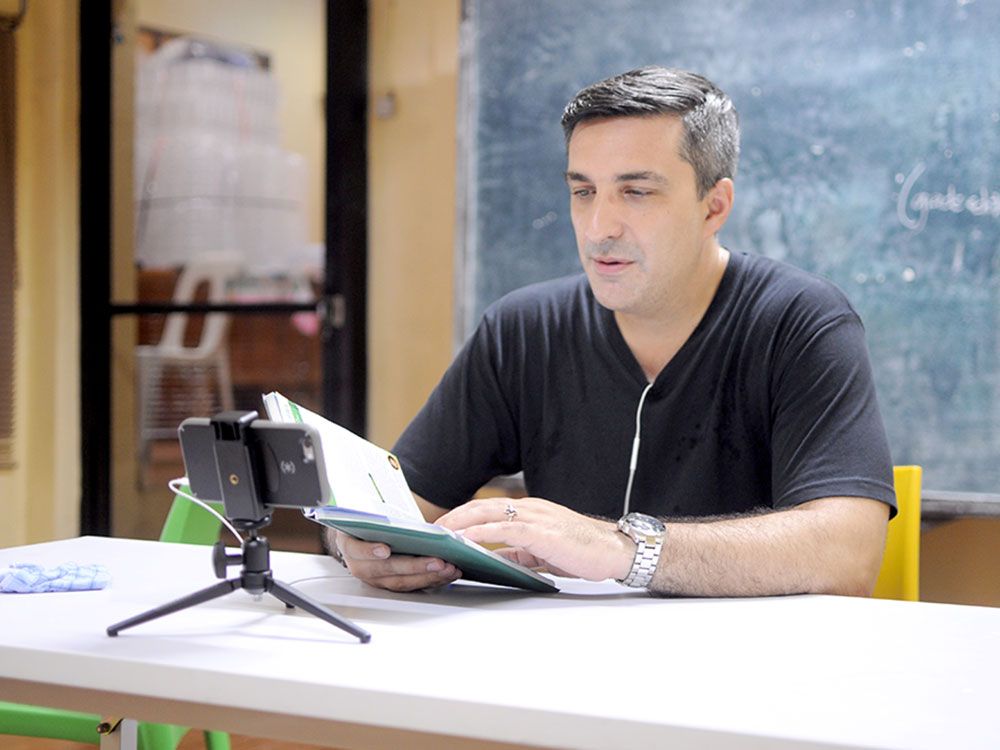 Making the Word of God viral

An Argentine priest promotes the Gospel through Facebook, early morning, as a spiritual food for the day. Influenced by the love for the poor of Fr. Bergoglio who, years later, became Pope Francis, the missionary runs a community-based rehabilitation program for drug addicts in an urban parish in Manila.

Every morning, Fr. Luciano Felloni sits in front of a camera and records for less than three minutes about what the Gospel for the day is and speaks further about what he thinks Jesus meant. The Argentine ends each post encouraging the viewer to like, share, and tag friends. And then he says, “let us all be missionaries using Facebook; let’s make the word of God viral.”

Fr. Felloni’s Facebook page is called “Almusalita with Fr. Luciano Felloni.” Almusalita is a play on words with the Filipino words almusal and salita, which means breakfast and word, respectively. The page, as he told World Mission, is “a daily journey with the Word of God.”

The word in the morning

He wants the viewer to have a glimpse of the Word first thing in the morning as he videos between the hours of 5 am to 8 am. His target audience is, obviously, the Filipino masses as he converses in their native language. In fact, he expresses himself in perfect Filipino, as if he has been speaking Tagalog all his life.

“Social media is where people ‘live’ great part of their day,” says Fr. Felloni. “Thus, I thought that for a missionary to go to that ‘new continent’ is a must. So I started to learn its language and to work in social media.”

Before he came to the Philippines, the 44-year old then had to convince his mother that being a priest was his calling. “My family is Catholic but non-practicing, especially during my childhood days and my teenage years,” he revealed. He related to an earlier interview that his family did not pray the rosary or even go to Mass.”

“I studied in a Catholic school,” he disclosed. “Eventually, at the age of 15, I became active in a youth group in my home parish. As a youth, I served as a catechist and also volunteered for a house that served young people with severe disabilities. It is in that context that I decided to become a priest.”

His friends made his transition to a prayerful life possible when he went camping with the youth, and then there was a pilgrimage organized by the local church, which he and his friends joined. During the latter, they only used bicycles to get to their destination. It was because of his friends that he suddenly became active in church. That was when he felt satisfied and happy there.

So, he thought to himself, why not continue on this feeling forever? “Why do I need to choose a different path of life. Here is where I am happy; why can’t’ I try this forever?” Fr. Felloni shared in Tagalog.

Of course, he had to tell his girlfriend. Thankfully enough, the girl understood and took it in. Yet, the bigger challenge laid not with his girlfriend but with his family. The day that he was to tell his mother that he planned on entering the seminary, he brought with him two friends – both priests.

Unfortunately, his plan backfired as his mother drove out his friends all the while cursing them. According to Fr. Felloni it was a disaster. By then his mother started praying every day, and this was so that her son will leave the seminary. Her mother came to terms with Fr. Felloni’s situation when the latter told her that he was to become a missionary.

Fr. Felloni first garnered attention when Pope Francis visited the Philippines. In Argentina, Felloni knew the Pope as Father Jorge Bergoglio. “I knew Father Bergoglio when I was in Philosophy. He used to give recollections in our seminary and we used to go to him for confessions,” Fr. Felloni said.

He shared that, during confession, the then Fr. Bergoglio would veer from the usual confession rite and ask how they treated the poor. The Pope had advised them to treat the poor kindly, to have time for the people, and to hear them out, as this is what makes a good priest. Fr. Felloni said of the Pope that, “his simplicity and real concrete love for the poor touched me deeply.”

Mission in the philippines

“At the age of 20, I was sent to the missions,” Fr. Felloni told us. “I spent six months in London learning English and then, at the age of 21, I arrived in the Philippines and was assigned to the newly-established parish of Mother of Divine Providence in Payatas, Quezon City.”

Payatas in Quezon City, Metro Manila, is one of the poorest communities in the Philippines. Fr. Felloni asserted it was poverty in all senses. “From life, from the land where their dwellings are, from the stench of the garbage, from the dream to study that would not come true because of their impoverished conditions,” Fr. Felloni felt pity and mercy for his parishioners but, at the same time, there was also joy that his Church was there.

“It was my dream to live for the poor,” he told ABS-CBN in Filipino. “This was my chance, to live poor and for the poor.”

In 2013, Fr. Felloni was assigned to Caloocan City. That did not stop the Argentine priest to live for the poor. Now that his parish is Our Lady of Lourdes, in another part of Metro Manila, he shared: “In my present assignment in an urban poor community in Caloocan, one of the newest programs is the community-based rehabilitation program.”

“It’s a six-month outpatient program that aims at helping people out of addiction as well as removal from the police watch list,” he said to World Mission. “It uses a holistic approach: health, psychosocial, spiritual, family, livelihood, etc.”

Fr. Felloni does not speak ill of the Duterte’s administration and, instead, believes that the government is not the enemy; drugs is. “Let Duterte alone,” Fr. Felloni said, speaking at the Drug Issues, Different Perspectives of Drug Policy Forum. “We are saying it is possible to heal them (drug addicts). Why force the issue on fighting the government?”

“I think we have too many people talking about drugs without even knowing the name or the face of the drug addict,” he added. “And that’s where our conversation [shoots] up to the academic level without considering the reality on the ground. Visit the people.”

He voiced out, “we can work with the Filipino government successfully. It’s difficult but it’s possible....We should build bridges rather than walls.”

Building bridges, that is what exactly Fr. Felloni is doing, be it in social media or in his parish. He carries on with making the Word of God viral and, at the same time, exemplifying Christ as he continues living for the poor and asserting their rights.

The new movie Smaller and Smaller Circles, based on the award-winning novel, highlights the fictional investigative prowess of two Jesuit priests who solved a series of murders in a slum neighborhood…

Melbourne-based street artist Kaff-eine found her way to the charcoal-making community in Baseco and the dumpsite in Happyland, Manila, where she collaborated with residents and created artworks using…