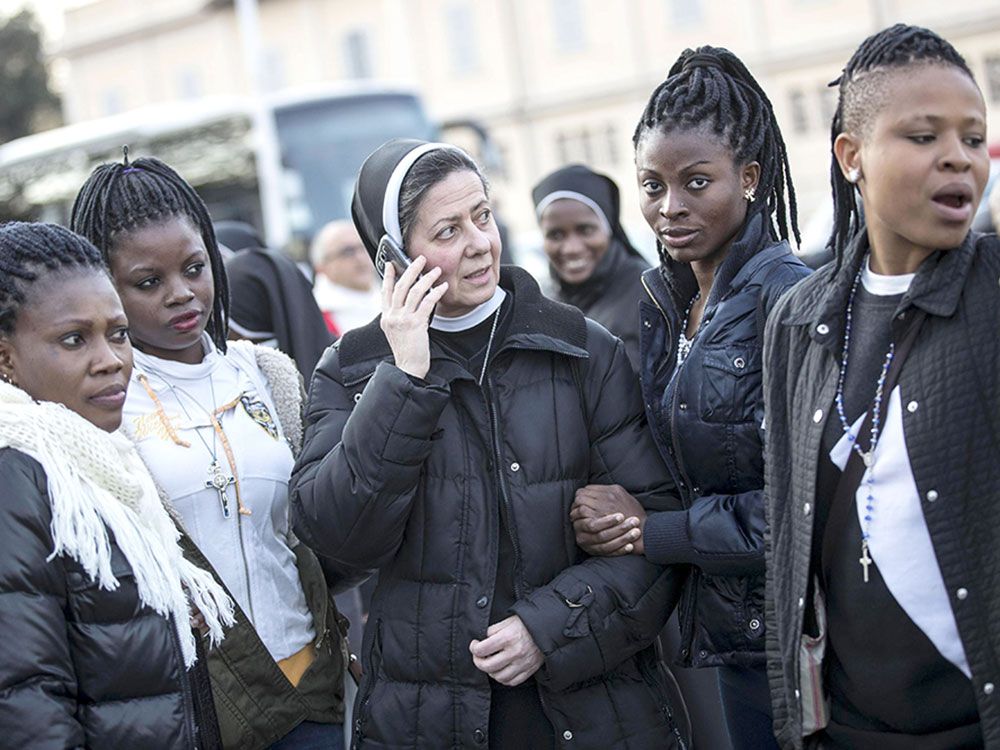 Women religious in different parts of the world are bringing the issue of human trafficking to the attention of lawmakers and government officials. National networks of Sisters and lay people welcome survivors of trafficking, helping them to be reintegrated in society.

"The Spirit of the Lord is upon me, because He has anointed me to bring good news to the poor. He has sent me to proclaim release to the captives and recovery of sight to the blind, to let the oppressed go free…” Lk, 4,18

These words from the Gospel of Luke, reflect the mission of Jesus and signals to us what our mission must be, as followers of Jesus. Nowadays, in a world with more than 45 million people in slavery conditions, religious life cannot be detached from its mission of working for a world where every human being can enjoy the freedom of children of God and the life in abundance that Jesus brought to all of us.

We can safely say that the Religious Sisters are the trailblazers in many activities in the church. In a number of cases, women religious in different parts of the world have brought the issue of human trafficking to the attention of lawmakers and government officials.

Talitha Kum – the International Network of Consecrated Life Against Trafficking in Persons – was born in September 2009 out of a shared desire to coordinate and strengthen the already existing activities against trafficking undertaken by consecrated people. It took its name from the Aramaic words used by Jesus in the Gospel of Mark 5:41 where He tells the little girl, lying dead, to rise up: “Maiden, I say to you, arise.”

At present, Talitha Kum counts with 22 networks of Religious Sisters working at the grassroots in 70 countries across the five continents, comprising approximately 1,500 nuns and many other lay people working together with them.

The national networks aim at raising the awareness of society and governments about human trafficking and how to prevent it. Their members visit schools, churches and various groups, addressing them on the scourge of trafficking and what can be done to fight against it.

In Nigeria and Cameroon, for example, nuns run shelters that receive survivors of trafficking coming back from Europe and from other countries. Women receive support, care, healing and help to be reintegrated in the society. Besides, they are offered bursaries for studies or microcredit to run their own business in order to prevent them from being again prey to the traffickers. In countries that have had violent conflicts such as Democratic Republic of Congo, Sierra Leone and Liberia, the Sisters reach out to former child soldiers who are often exposed to the risk of being sold once they leave the militia.

It’s important to remember that working in prevention doesn’t mean only to talk about this issue, but also working to combat the causes that push people to get trapped in this evil net. It’s important to work for a world with more opportunities of dignified life to everyone, to combat poverty, to educate! To prevent children to live in the streets, to offer job opportunities to young people.

Another very important thing is that we must work together, the monster we are fighting is so huge to be defeated just by one group, organization or congregation; we have to unite efforts, to be together, to share resources and knowledge. Together, as religious, with other churches and people from different faiths, with governments, and with organizations working on the same issue, together, in collaboration, we can achieve much more!

While the Sisters are very much engaged in the struggle against trafficking in persons, there are male religious and diocesan priests who are also committed. And many more are getting interested, including bishops.

I am a Comboni Sister living in South Africa since 2010 and have been working in the prevention of human trafficking. I am also volunteer in a shelter that welcomes victims of human trafficking and domestic abuse. Here, I meet women of every race and nationality who carry their own stories as burdens, so hard to speak of and so difficult to forget.

In 2008, the Leadership Conference of Consecrated Life (LCCL) and the Southern African Catholic Bishop’s Conference (SACBC) established the Counter Trafficking in Person Desk (CTIP) as a joint project, having Sr. Melanie O’Connors, from Holy Family Sisters, as the coordinator. The office prepares material about human trafficking and offers workshops to religious, lay people and Christians of other denominations.

I was one of the beneficiaries of such formation in Pretoria, after which I and some other young people started visiting groups and parishes to impart knowledge about the trade of human beings. We raise the consciousness of Christians and citizens, in general, to a phenomenon that is quite widespread in the world and can trap anybody. We give information and teach how to spot signs of human trafficking and how to act.

bIn 2011, I, together with a group of young people, created a team called “Without Chains” (www.facebook.com/WithoutChainsSA), adopting the slogan “For the End of Slavery.” The group comprises nine volunteers who go to schools, churches, clinics, concerts, groups, marches, passing the message of prevention and fight against human trafficking. In every community we visit, we set up a group of people who can continue working on the various aspects or problems to stop human trafficking.

The words of South African Bishop and Nobel Peace Prize, Desmond Tutu, strike a chord in our endeavors and spur us to go on in our struggle against one of the worst plagues of present-day humanity: “If you are neutral in situations of injustice, you have chosen the side of the oppressor.”

An Only Son, But Never Lonely

A Filipino missionary, Jemboy Caspis, hailing from General Santos, recounts how he faced the dilemma of wanting to be a priest yet facing difficulties because he was an only son. Today, he is working…

“The one who accepts suffering trusting in God is at the centre of the universe” (Simone Weil). For the same reason, those who help people who suffer in every way possible, emerge as a force for good…