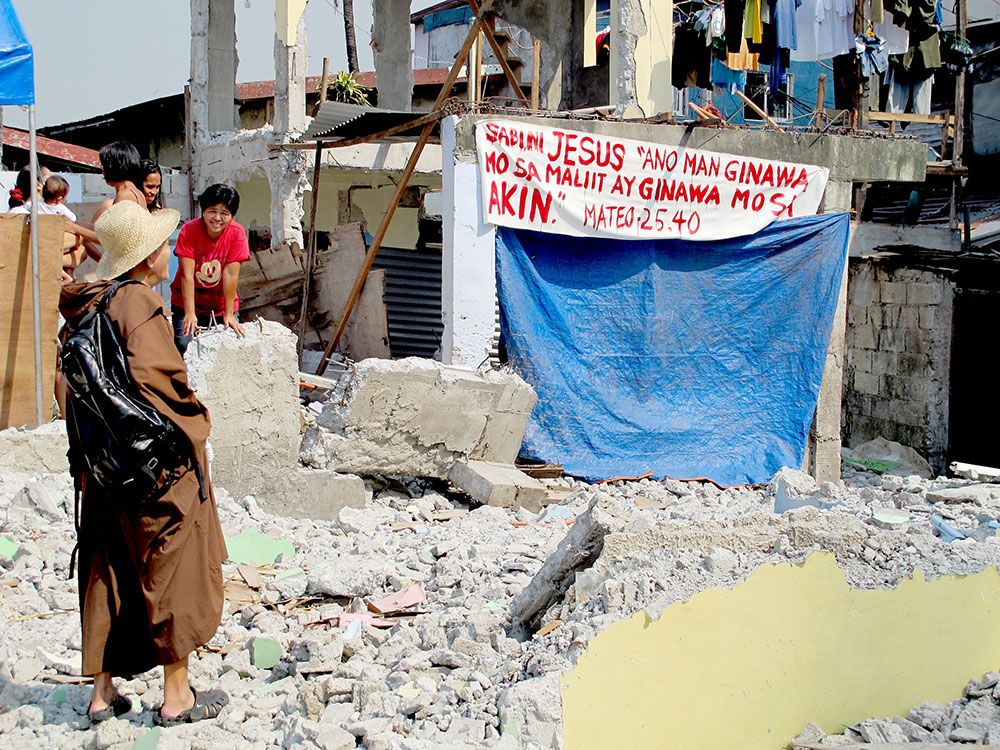 Good News for the Stray

The fulfillment of human existence consists in the apparent paradox of giving away so as to receive back. Or better still, in self-giving in order to find everlasting joy and success. This existential wisdom is enshrined in the sayings of Jesus of Nazareth, in the lives of saints and in all religions.

"Life grows by being given away, and it weakens in isolation and comfort. Indeed, those who enjoy life most are those who leave security on the shore and become excited about by the mission of communicating life to others” (Evangelii Gaudium, 10)

This is the mystery in human processes: it is in giving that you receive (Francis of Assisi); give, and there will be gifts for you (Luke 6:38). It is when we love, that the whole of humanity feels cared for and looked after. You yourself are the beneficiary. To offer such assistance is our duty; in fact, it is an inbuilt part of our nature which we keep resisting in our selfish moments. The universe never neglects to tend any being it has brought into existence. The lilies bloom and the sparrows thrive because of the self-care of the universe; everything is part of a grand design. Faith is to recognize it.

Mysteriously, this great design is realized through ‘your’ generosity as well. It is through ‘your’ self-giving that the great architect operates inconspicuously in history and leads everything to its destination.

Arnold Toynbee in his Civilization on Trial says, “The things that make good headlines are on the surface of the stream of life, and they distract us from the slower, impalpable, imponderable movements that work below the surface and penetrate to the depths. But it is really these deeper, slower movements that make history, and it is they that stand out huge in retrospect, when the sensational passing events have dwindled, in perspective, to their true proportions.”

When you move to the “fringes of humanity,” (Evangelii Gaudium, 46)  curiously you are moving to the centre of the cosmic order (Schweitzer in Africa, Damien at Molokai, Mother Teresa in the slums, a missionary in neglected corners or amidst forgotten families, or addressing rebellious hearts ).

Pope Francis says in Evangelii Gaudium, 24, the pastoral leader listens to others, remains with people who need him, and ever keeps the door open for the ‘stray friend’ to return. The “evangelizing community gets involved by word and deed in people’s daily lives,” abases itself if necessary, touches the suffering flesh of Christ in others; it remains supportive, stands by people, with unbelievable measure of “apostolic endurance.” Good News becomes good news only when it is made meaningful and relevant to the person concerned.

Respect For The Wrongdoer
Jesus who had strong words for Nicodemus, a teacher in Israel who was slow to understand things spiritual, had no such words for Zacchaeus the exploiter, the woman at the well of irresponsible relationships, the man on the cross who was being penalized for thievery.

As the missionary earnestly pleads that the child in the womb be not rejected, he/she also urges that compassion and understanding be shown to the complex-ridden and guilt-laden mother who has consented to the elimination of her own baby. Everyone longs for love, sympathy, humane treatment...the victim of a crime and the criminal who is beginning to understand the enormity of the wrong thing he/she has done. While exposing the Pharisees for their duplicity, Jesus accepts the invitation of Simon the Pharisee; for, he too deserves attention.

Jesus extends a sense of belonging to everyone. Pope Francis cautions us against creating a feeling of non-belonging that can arise in the Church when we allow Church structures to grow rigid, and when Church personnel adopt a bureaucratic style in dealing with the faithful. An administrative approach weakens pastoral relationships and builds up an atmosphere of unwelcome (Evangelii Gaudium, 63). This is a word of caution for us as Church structures multiply: schools, hospitals, formation houses, training centres, and institutions of diverse nature.

Structures of course are necessary for effective service in diverse fields. But impersonality, possessiveness, pretension to prominence, eagerness to outsmart others...these, and similar things are not necessary. In fact, they weaken the purposefulness of those very institutions. They disfigure the ‘human face’ of the Catholic Church and weaken our collective ‘power of persuasion.’

Gospel-Inspired Groups
As institutions multiply, so do organizations, associations, NGOs, groups of activists, experts, and specialists. And we rejoice. We need their intelligence, dynamism, creativity and energy to be able to serve the weaker sections of our people: threatened tribal groups, marginalized communities, trafficked women and children, those living below poverty line, and others.

We need their work for the landless, jobless, migrant labourers, exploited domestic servants, youth moving to the cities. They uphold the dignity of labour and promote their spirituality. They press for efficient and conscientious work from employees, just and fair dealings from employers, and ethical transactions from those doing business.

They will be committed to the cause of the downtrodden in society; alert to the problems of slum-growth, urban pollution, environmental deterioration, deforestation, drugs, pornography, HIV/AIDS, child abuse, and like evils. Through the spoken and written word, articles, letters to the editor, entry into the internet, and expressions of dissent when needed, they will do all they can to educate fellow-citizens in their obligations to the common weal.

However, all these teams must work in collaboration, playing complementary roles and continuously encouraging each other: no rivalry over approach to aid-giving agencies, no struggle over special rights and privileges, no autonomy that moves to total ‘independence and non-relationship’, no legalisms meant to outsmart the ‘other’, no fighting for justice that sends the ‘fighting genes’ into one’s DNA.

I would not dare to refer to such possibilities unless Pope Francis had put the caution into Evangelii Gaudium, 98, “How many wars take place within the people of God and in our different communities! In our neighborhoods and in the workplace, how many wars are caused by envy and jealousy, even among Christians! Spiritual worldliness leads some Christians to war with other Christians...”

Christian communities and even consecrated persons entertain “enmity, division, calumny, defamation, vendetta, jealousy”; they desire to impose ideas, and engage in persecution and witch hunts. “Whom are we going to evangelize if this is the way we act?” (Evangelii Gaudium, 100).

Dreams, Hopes, Confidence
However, Pope Francis writing in Amoris Laetitia reminds us that it is no use decrying the present-day evils; it won’t change the situation (Amoris Laetitia, 35). He was referring to anxieties related to family life: inter-cultural marriages, inter-faith marriages, cohabitation, broken relationships. It is when pastors understand couples in pain from within and share their inner agonies, and manifest the “power of tenderness,” does healing come and discernment bear fruit (Amoris Laetitia, 308). There is always abundant room for “missionary creativity” in such difficult situations (Amoris Laetitia, 57). He urges pastoral leaders “to be attentive...to how people experience distress” (Amoris Laetitia, 296) and become experts in the “pedagogy of love” (Amoris Laetitia, 211).

One great advantage of keeping close to pain is that we will be spontaneously drawn to share pain with those who suffer. We become tender-hearted and loving, our inner sturdiness to stand pain grows day by day. We become more and more generous in keeping our promise of being poor, chaste, obedient, observant, serviceable, and outgoing in service.

People will find us more convincing when we speak of the challenges of Christian life, the need for self-education and discipline, the joy of serving, and the thrill of reaching out to heroic levels of self-giving. “You can’t have a family without dreams” (Amoris Laetitia, 168). These dreams are important for the entire human family as well.

And this family of the human race longs for something beyond immediate wellbeing. That was what Pope Benedict XVI was referring to when he spoke about the pain of living in a fast-secularizing world, “In this desert without God, the new generation feels a deep thirst for transcendence” (to the bishops of Brazil, Osservatore Romano, 16.9.09). “Blessed are those who hunger and thirst for what is right, for they shall be satisfied.” (Matthew 5:6)

The Traslacion is held every January 9 on the feast of the Black Nazarene. It is a spectacular and even scary mammoth, with a seven-kilometer long procession attracting between a million to 1.5…