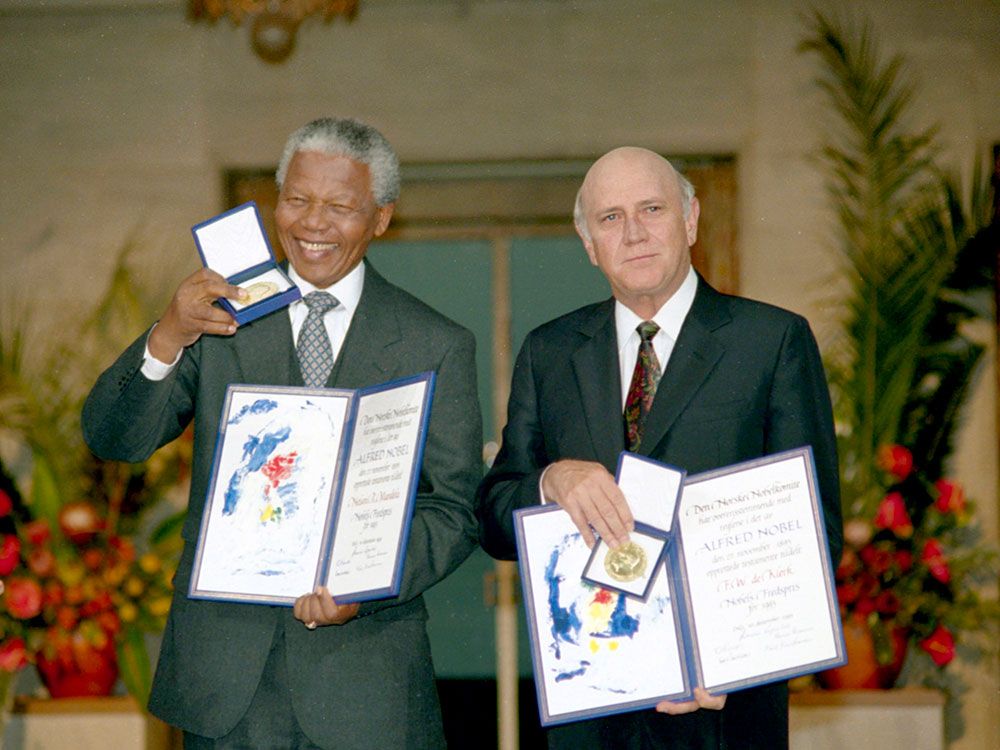 The Power of Forgiveness

Hero of his people’s anti-apartheid struggle, Nelson Mandela (1918-2013) became South Africa’s first democratically elected president. In working to free his country from racial division, he led an essentially peaceful revolution. Mandela has surely been venerated by more millions in his lifetime than any other political figure in history.

Nelson Mandela, leader of the movement to end South African apartheid, was released from prison after 27 years on February 11, 1990.  This unexpected “miracle” drew the attention of the whole world. People everywhere let out a sigh of relief and immediately understood that Nelson Mandela would lead his beloved country gradually but peacefully to equality and democracy.

Four hours after leaving prison, Mandela arrived in Cape Town to address more than fifty thousand  people gathered outside the city hall. Mandela called on the international community to maintain its sanctions. “I have carried the idea of a democratic and free society in which all persons live together in harmony and with equal opportunities. I hope to live to see the achievement of that ideal. But if need be, it is an ideal for which I am prepared to die,” he shouted.

These words echoed the famous declaration he made when he was arrested 27 years before, and he thought he would be condemned to death. This shows that the years in prison had not bent his determination but strengthened it.

Mandela once observed that some people are made by prison, others are broken by it. He, of course, was made by it. Which is what made him, in turn, a man for whom it was worth waiting. With hindsight, Mandela used the fiery address also to take up a negotiating position and convince the black majority that he had not made a secret pact with the authorities.

The Double Struggle
In 1944, Nelson Mandela, a lawyer at the age of 26, joined the African National Congress (ANC), the oldest black political organization in South Africa, where he was chosen as the leader of Johannesburg’s youth wing. In 1952, he became deputy national president of the ANC, advocating nonviolent resistance to apartheid: South Africa’s institutionalized system of white supremacy and racial segregation.

However, after the massacre of peaceful black demonstrators at Sharpeville in 1960, Nelson helped organize a paramilitary branch of the ANC to engage in guerrilla warfare against the white minority government.  He said: “A freedom fighter learns the hard way that it is the oppressor who defines the nature of the struggle, and the oppressed is often left no recourse but to use methods that mirror those of the oppressor. At a certain point, one can only fight fire with fire.”

About that time Mandela was living on a farm in Rivonia, a suburb north of Johannesburg.  His wife Winnie brought him an old air rifle for target practice. One day, he shot a sparrow with it and was mortified when the five-year-old son of a friend complained to him, saying: “Why did you kill that bird? Its mother will be sad.” “My mood immediately shifted from one of pride to shame,” Mandela recalled.

“I felt that this small boy had far more humanity than I did. It was an odd sensation for a man who was the leader of a nascent guerrilla army.”

Long Walk To Freedom
After being arrested twice before, in June 1964, he was convicted of sabotage along with several other ANC leaders and sentenced to life in prison. Mandela spent the first 18 of his 27 years in jail at the brutal Robben Island Prison. Confined to a small cell without a bed or plumbing, he was forced to do hard labor in a quarry. He could write and receive a letter once every six months, and once a year he was allowed to meet with a visitor for 30 minutes. The other years he was at house arrest.

Perhaps the abandonment of his family was his greatest trial during the prison years. The most agonizing experience he suffered in this respect was the death of his eldest son, Thembi, in a car accident. As an adult Thembi had never visited Mandela in prison, seemingly out of a sense of resentment towards his father. Mandela’s account of how he battled to contain his grief provides the most moving moment in Mandela’s autobiography, A Long Walk to Freedom.

In 1989, F.W. de Klerk became South African president and set about dismantling apartheid. He lifted the ban on the ANC, suspended executions, and in February 1990 ordered the release of Nelson Mandela. Later he declared: “If we had not changed in the manner we did, South Africa would be completely isolated. Internally, we would have the equivalent of civil war. The legacy of Mandela – reconciliation – urgently needed to be revived.”

Reconciliation In Action
In 1993, Mandela and de Klerk were jointly awarded the Nobel Peace Prize. One year later, the ANC won an electoral majority in the country’s first free elections, and Mandela was elected South Africa’s president.  Mandela retired from politics in 1999, but remained a global advocate for peace and social justice until his death in December 2013.

Mandela has been above all the person of reconciliation, of the effort of forgiving, even without the condition of reciprocity, with the purpose of uniting a people, knocking down barriers of separation. He managed to do it, giving his country one of the most advanced Constitutional Charter which upholds the rights of all members of the innumerable ethnic units of South Africa.

Another way of understanding South Africa is to recognize it as something of an Old Testament story, a tale of a people struggling to do right but failing time and time again. In the second half of the 20th century, these people had need of a unifying figure to give them a vision of nationhood.

Mandela saw the need, understood and assumed the role demanded and gave his life for his people. There lies his greatness, and hence the tears that flew at his death in his much beloved country and around the world.

First Catholic priest in Soviet Kazakhstan, Fr. Wladyslaw served 13 years of hard labor in a detention camp. Despite persecution, he went on exercising his priestly ministry without reserve, caring…

The Power of Two

He was a lawyer and a civil servant, she a housewife, a writer and a mystic. They are the first couple to be declared blessed, a shining example of the holiness “next door” of which Pope Francis…