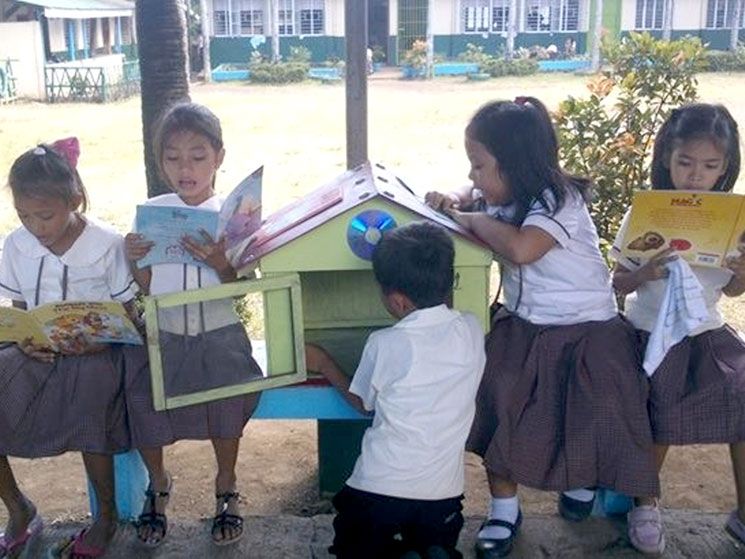 Take A Book, Return A Book

An American organization is encouraging the culture of reading in the Philippines through books, literacy initiatives and most of all, pocket libraries. What makes the little libraries special is that these are free.

On the northern tip of the Philippine archipelago, in a little town on the coast of Batanes, a little girl is sitting beside a stack of books inside a small library. She picks up a book, and as she leafs through its pages the words capture her imagination, taking her to places where she has never been to.

The simple collection of books stacked in the shelves are from the Little Free Library (LFL), a volunteer organization dedicated to developing the culture of reading in rural areas.

The organization did not start on Philippine shores but in the United States. An American, Todd H. Bol, wanted to share his books with his neighbors. So, in 2009, he started a front yard book exchange that attracted many donors.

Bol’s idea became a community learning program called Little Free Library. Today, he has numerous free books numbering 40,000 titles which anyone can borrow in Little Free Library book exchanges, not only in the US, but also in other parts of the world such as Iceland, Pakistan, Tasmania and of course, the Philippines.

Lfl In The Mall
It was more than three years ago, on November 2015 at a mall, the UP (University of the Philippines) Town Center, when LFL was opened in the country.

“New and creative ideas continue to be generated throughout the world and shared through us,” said the founder and Executive Director of the Little Free Library Organization. “We are in the Philippines to share these and hopefully raise the level of literacy here.”

The malls help create an environment that will enhance cultural and reading performance. “We believe our malls could also be venues for learning and thus, we envision to have little library nooks where our shoppers can ‘take a book, return a book’” said Rowena Tomeldan Head of Operations & Support Services at Ayala Land, Inc.

Since then, Ayala Malls have installed LFLs in certain areas of its 30 shopping centers found around the country. It is not only inside these malls that LFLs can be seen. They are also in neighborhood centers, army hospitals, correctional facilities, and schools.

Schools Are Important
Public and private schools are centers of learning for children. This is why “expanding these little libraries is a priority for some as they serve the multiple functions of book storage and receiving centers, training hubs for reading, grassroots publishing, little libraries design centers, monitoring, and a center for culture in the area,” says LFL Philippines in a statement to World Mission.

One of the private schools where LFL partnered with is the group of Catholic schools of St. Paul’s. St. Paul School of Makati, for one, plans to build 100 little libraries within the depressed areas of the city.

In the public school system, the Quezon City government passed a resolution endorsing LFLs. About 20 of the 142 schools in the city are participating with more being encouraged to join. The Quezon City Public Library has signed a Memorandum of Agreement with the Little Free Library to build an Association of Little Free Library Stewards to include more science and professional structure in mobile education.

In other parts of the country, such as Batangas, the Jose Obando Memorial Elementary School has been “creating a Center for Excellence in Reading model to help generate storytellers, writers, poets, translators, teachers, among others,” shared LFL Philippines.

Folklore Stories
Yet, it is not only sharing books that the Little Free Library is engaged in. It also has a publication arm, the Grassroots Publishing Program, which aims to nurture and collect folklores. One such example is the reprinting of the Charms of Mount Iraya. The stories found in this book are loved and being shared for generations by Ivatans, the indigenous people of Batanes.

“Embodied in the stories are the hidden cultural values, fears, hopes, struggles, beliefs, and aspirations of these cultural groups which as described by the authors, is an integral part of the Philippine national heritage,” LFL Philippines stated.

With the reprinting of this folklore, LFL hopes to rekindle the love of reading in Batanes and motivate other folkloric stories to be published. Other such stories from the mountains of Benguet, Mindoro Islands, the Tivolis and various indigenous tribes in Mindanao are being looked into and are already part of the program.

One Thousand Units
By the end of 2017, there are some 1,000 LFL units (together with those that have been pledged) in the country. These are mostly in Batanes, Quezon City, Batangas, Ifugao, Mountain province, and other places. LFL also plans to open some of its pocket libraries in Palawan, Mindoro, Leyte, and (ever so challenging) some of the most literacy deprived areas in the far flung islands of the Philippines.

Designed to be self-managed, LFLs are independent from other little free libraries and adapted to the communities where they are located. The designs adhere to the culture of where the LFL is located. One example is that of the 28 Little Free Libraries in Batanes, all of which have been designed by Ivatans themselves.

Organizations like the Rotary Club have pledged to help develop the beneficiaries’ literary skills. Publishing houses deliver books when required. Ayala Malls become the drop off point for needed books and space while the Philippine Army carry out logistical support.

Bol said during the launch of the LFL at the Army General Hospital located in Fort Bonifacio in 2016: “The only way this can happen is to have a strong and dedicated logistics partner that makes sure Little Free Libraries and books reach across the islands. I do believe the Philippine Army is the more than perfect partner to make this a reality for all of us.”

LFL stewards, as they are called, have an annual meeting where they update each other on the progress and maintenance of the Little Free Library system in the Philippines. The youngest steward is Essence Macabebe, barely 10 years old, who hails from Calaca, Batangas.

“Since we operated our LFL at Barangay Quisumbing of the said town, we have welcomed and helped bookworms like me and others who have just started to appreciate LFL’s value,” she said in a speech at the opening of the LFL at Museo Pambata. “LFL for one promotes a culture of seeking donations and pledges. But if you try to understand it more closely, we are actually promoting “sharing”. Why not? Some are blessed more than others, so we share our extra books.”

With its take a book, return a book system, LFLs around the country (and the world) will surely have more titles coming its way. Donating a book is quite simple. With every book that comes to these LFLs, more and more children and even adults will surely be grabbing a book and let their imagination take them to places they could only dream of.

A Call to Witness

Being a call center agent may be a well-paying job. Yet, it can also be a means to helping the less fortunate and seeking answers to the meaning of life. Leomar Maranan describes how to find balance…

The acceptance of Christianity is evident in the festivals which show the popular response to it as an invitation to joy and celebration. In them, faith becomes culture.