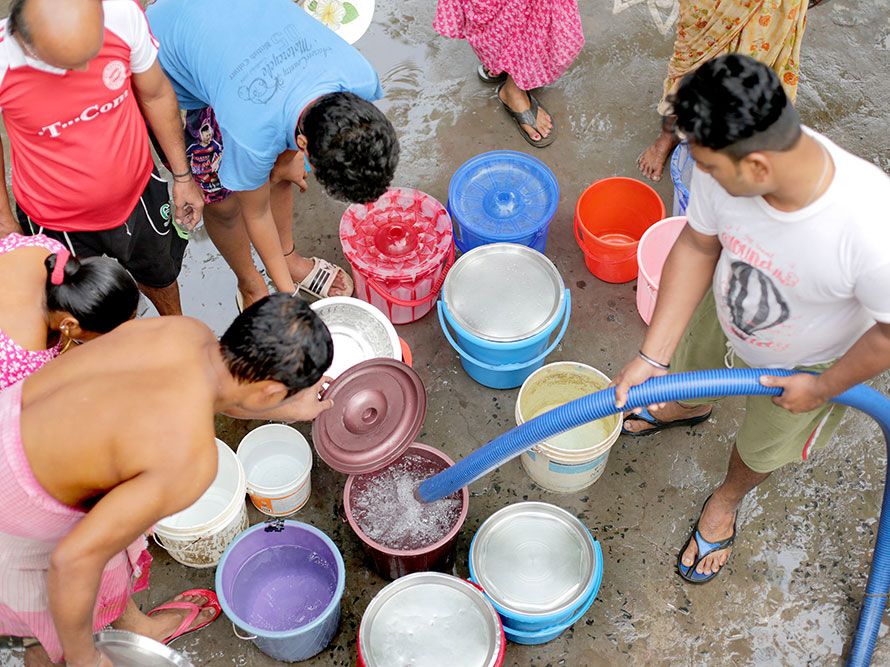 “Water shortages lag only climate change and population growth as a threat to the human future,” said Brown in an exclusive interview by this author.  “The challenge is not to get enough water to drink, but to get enough water to produce our food.  We drink, in one form or another, perhaps four liters of water per day.  But the food we consume each day requires 2,000 liters of water to produce, or 500 times as much.”

Agriculture is by far the biggest consumer of water around the world. In thickly-populated Asia, agriculture accounts for 86% of the total annual water withdrawal.

Rice is a case in point.  In his book, Water: The International Crisis, Robin Clark reports that an average farmer needs 5,000 liters of water to produce one kilogram of rice. “Rice growing is a heavy consumer of water,” agrees the International Rice Research Institute report, Water: A Looming Crisis. This water shortage could seriously threaten rice production in the region. This is bad news for Filipinos who consider rice as their “deepest comfort food.”

Meat production also consumes a lot of water.  Beef, the meat used in most fast food outlets, is by far the most water-intensive of all meats.  A huge volume of water is also used in aquaculture or fish farming.

Water Footprint
It goes without saying that water is indeed the world’s most important resource.  “Liters and liters of it are consumed by everything we eat, and everything we use and buy,” pointed out Stephen Leahy, a Canadian journalist and author. That’s what he calls as “water footprint.”

“Water isn’t just a commodity.  It is a source of life,” says Sandra Postel, director of the Massachusetts-based Global Water Policy Project. Postel believes water problems will trail climate change as a threat to human future. “We can transition away from coal and oil to solar, wind and other renewable energy sources. But there is no transitioning away from water to something else.”

Water covers over 70 percent of the earth’s surface and is a major force in controlling the climate by storing vast quantities of heat.  About 97.5 percent of all water is found in the ocean and only the remaining 2.5 percent is considered fresh water.  Unfortunately, 99.7 percent of that fresh water is unavailable, trapped in glaciers, ice sheets, and mountainous areas.

“World demand for water doubles every 21 years, but the volume available is the same as it was in the Roman times,” observes Sir Crispin Tickell, former British ambassador to the United Nations and one of the organizers of the 1992 Earth Summit in Rio de Janeiro.  “Something has got to give.”

Again, here’s a thought-provoking statement from Brown: “The most important thing we can do to cope with water scarcity is to use water more efficiently in agriculture.  Beyond this, urban recycling of water, still in its early stages, will be one of the keys in dealing with fast-spreading water shortages.”

Pope Francis has titled his message for World Mission Sunday 2016 as "Missionary Church, Witness of Mercy." Francis centers his reflections on “Mission and Mercy” since, this year, the Church is…