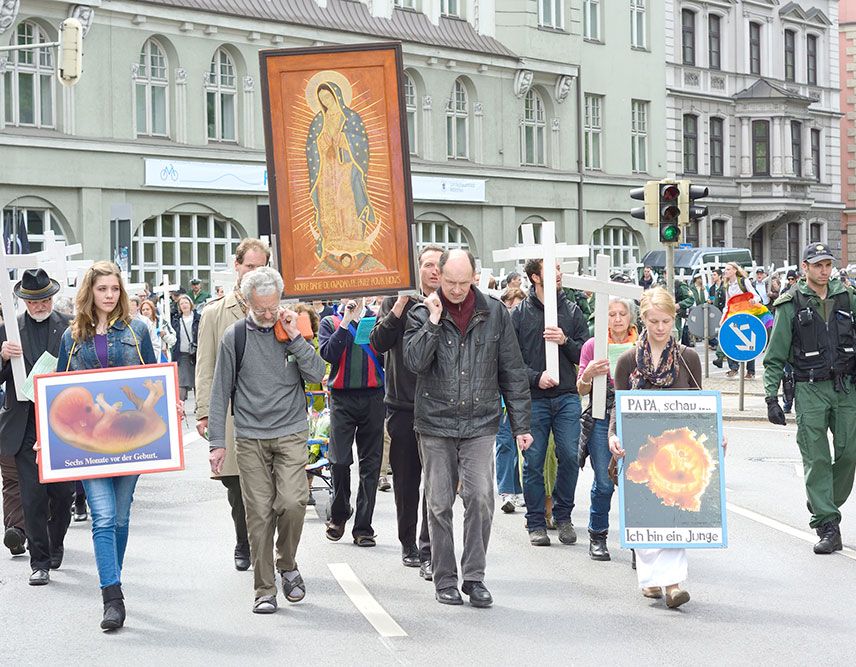 By Anna Cosio-Vitasa | Writer And Speaker, Filipinos for Life

As societies around the world cope with the spread of Covid-19, pro-abortion activists in various continents, especially North America and Europe, have been trying to use the coronavirus pandemic to demand easier access to abortions.

Apparently travel bans, lockdowns, and the closing of “nonessential” businesses are not going to stop pro-abortion groups from going after the unborn. For instance, in the UK, the government passed an emergency legislation on April 5, allowing women to kill their preborn children at home by chemical abortion during the coronavirus pandemic. (Chemical abortion works by depriving the preborn baby of progesterone, a crucial hormone needed to keep him/her alive, and then causing the mother’s uterus to contract to expel the dead baby.)

Meanwhile, in Germany, some pro-abortion organizations were demanding the same. In the US, Democrat attorneys general of 20 states plus the nation’s capital called on the US Food & Drug Administration (FDA) to waive ordinary regulations on abortion pills on March 20, so women could perform DIY abortions at home. As of this writing, the US FDA has not given in to the demand.

However, DIY chemical abortions at home are just one of the demands of pro-abortion groups during the coronavirus pandemic. Planned Parenthood, the largest abortion provider in the US, is keeping its clinics in multiple states open only to perform abortions. Like the World Health Organization (WHO), Planned Parenthood considers abortion an “essential service.”

On March 27 Dr. Antonella Lavalanet, a medical officer in the WHO’s Maternal and Perinatal Health & Preventing Unsafe Abortion Team, stated that the WHO had released a document detailing the clinical management of respiratory infection, and “in that document we [WHO] said that women’s choices and rights to sexual reproductive health care should be respected irrespective of [their] Covid-19 status... That includes access to contraception and safe abortion to the full extent of the law.”

The WHO officer also stated that “abortion… services are essential,” which was likely a response to governments who, according to Lavalanet, “are trying to deprioritize these services.”

Planned Parenthood
Since the WHO itself has tagged abortion as an “essential service,” it is no surprise that abortion giant Planned Parenthood is so adamant to continue doing abortions during this pandemic. They even have the gall to ask their supporters for personal protective equipment (PPE) and other supplies while other doctors and nurses go without these as they struggle to save the lives of Covid-19 patients.

Planned Parenthood supporters in government also wanted them to be eligible for aid under the small-business portion of the US government’s nearly two-trillion-dollar stimulus package, according to a Bloomberg report.

What’s more, Planned Parenthood, together with other abortion providers, has sued some states for ordering a ban on abortion services during the coronavirus outbreak. Unfortunately, judges have struck down such abortion bans in Texas, Ohio and Alabama, allowing abortions to continue.

The abortion situation in Canada is not very different. Despite the nation’s restriction on non-essential surgeries due to the virus’ strain on the health care system, abortions have continued unimpeded. While hospitals have been cancelling and postponing surgeries amidst the pandemic, all ten Canadian provinces and three territories have deemed abortions an essential service.

Despite the WHO’s declaration that abortion was an essential service, some pro-abortion groups remain dissatisfied. International pro-abortion organization Marie Stopes International (MSI) was urging the WHO to make a stronger pronouncement, so as to “help countries to see abortion from a public health perspective”.

At the same time, the International Planned Parenthood Federation (IPPF) lamented that 23 of its member associations have had to reduce their abortion services because of the pandemic, with 5,600 clinics across 64 countries already closed. But this only means that the rest of their 46,000 associated clinics are still operating!

Extreme Abortion Law
Meanwhile, in New Zealand, the most extreme abortion law in the world came to be after the Abortion Legislation Bill passed its third reading in Parliament on March 18. The law was strongly opposed by the public and had seen a very large backlash from the disability community, especially from people with Down syndrome and their families.

Given such very low public support for the Bill, the government saw the opportunity to rush the final stages of the Bill’s progress through Parliament while the country was distracted with dealing with the coronavirus pandemic. The Bill passed by a narrow margin of 68 votes to 51.

The new law will include: abortion on-demand, for any reason, up to birth; sex-selective abortions; removal of the current 20 weeks limit for disability-selective abortion; no legal requirement that babies born alive after a “failed” abortion are given medical support; no legal requirement that pain relief be given to babies being aborted between 20 weeks and birth (Unborn babies can feel pain by 20 weeks gestation, although there are experts who claim that it could even be as early as 8 or 12 weeks) and no legal restrictions on controversial abortion methods such as intact dilation and partial-birth abortions.

Leaving newborns to die? Partial-birth abortions? How are these any different from infanticide? It is disturbing to think that government and world leaders, who are supposed to be protectors of the weakest in society, are the very people who will lead them to their brutal deaths.

WHO data shows that there are an estimated 50 million abortions per year or nearly 140,000 abortions per day worldwide. The world may have progressed in terms of technology, but it seems it has also regressed to ancient pagan practices of child sacrifice.

Three Lies
To try to justify abortion, pro-abortion activists have to lie. It would take another article to debunk all of their lies, but here are the three most common ones and the truth about them:

Truth: According to embryology, human life begins at fertilization. At that very moment the egg cell and the sperm cell meet, the first cell of a new human being (zygote) is formed. This first cell possesses its own unique human DNA, which is different from that of his/her mother’s and father’s. It is the beginning of the continuum of human life.

If allowed to grow according to the instructions in its own genetic code, the zygote will continue to move through the stages of an embryo, a fetus, a child, a teenager, and an adult. Hence, as far as science is concerned, human life begins at fertilization, and so the unborn is indeed human.

Truth: Sure, “her body, her choice,” but the thing is, the body of the unborn is not the mother’s body, nor is it a part of her body. If it were, then the mother would have four arms, four legs, two hearts, two brains, and so on. The body of the unborn is separate to that of his/her mother and he/she has his/her rights, too–the most fundamental of which is the right to not be killed.

Lie #3: “It’s cruel to force a woman to carry a pregnancy which was the result of rape.”

Truth: The innocent child conceived in rape does not deserve the death penalty for the crimes of his/her father. It is the rapist who deserves to be severely punished, not the child. It is also deceptive to claim that rape victims are better off having an abortion, as this could not be further from the truth.

An abortion is a second act of violence against the victim, and this time it also harms another innocent party–the child in her womb. Women who abort their children suffer psychologically and have higher rates of suicidal thoughts and attempted suicide, as well as higher rates of drug and alcohol abuse.

This is certainly not the path to healing, but to even more brokenness. We as a community need to give love and support to both the woman and her child, and hold rapists accountable to the fullest extent of the law.

The recent developments on abortion are truly appalling especially in the time of a pandemic. This only goes to show that the work of the pro-life movement is far from done. Let us continue defending the defenseless and being the voice of the voiceless. Let us promote a culture of respect for women. Let us fight the good fight until abortion becomes not only illegal everywhere in the world, but until it becomes unspeakable and unthinkable.