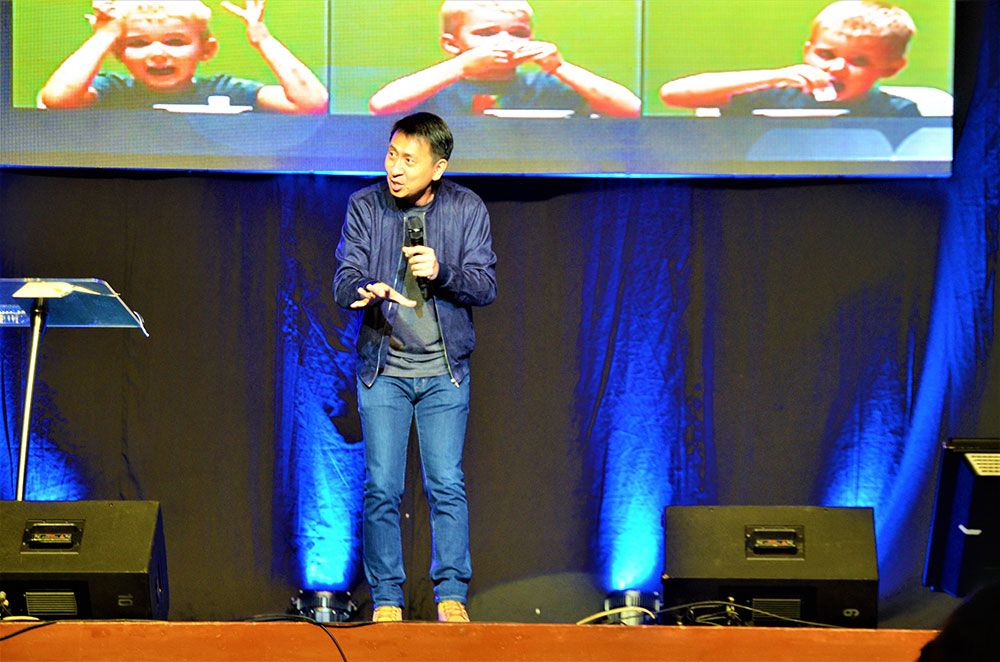 Bo Sanchez gave his first talk when he was 13 and has not stopped preaching since then. He is the founder of the lay movement “Light of Jesus Family” and its growing cluster of initiatives about Mission, Media and Mercy.

House” in Pampanga province. Rhea recalls how she was raped one night by at least six men under a bridge. For a long time, she endured the painful memory of strange men pinning her down and forcing themselves on her fragile body. She screamed, resisted and cried in pain to no avail. After a while, she realized that she was pregnant.

Rhea’s mother, also a single mother, came home from abroad and advised her never to consider abortion.  So she came to “Grace to be Born” to have her baby. She was alone and felt so helpless, Rhea said of that traumatic night. She added: “But my story is less painful than those of other young girls here. I was hurt by strangers. They were violated by their own family,” she said.

Rhea is one of the 296 pregnant women that “Grace to be Born” has served since its founding on May 8, 2009. The young mothers who finished the program at the shelter have given birth to 246 babies there. Most of the mothers are teenagers, some as young as 12, who are forced to take care of their babies because of the circumstances that brought on their pregnancy.

Giving birth is God’s grace, no matter the circumstances around it. The idea for the center came up in July 2008 when its founders, Rey and Myrna Ortega, went on a pilgrimage to Our Lady of Guadalupe Shrine in Mexico City. There Rey learned that Our Lady of Guadalupe is the patroness of the unborn, and he wondered why there was no such shelter for the unborn in the Philippines.

When the couple returned to the Philippines, they discussed with Bo Sanchez their dream of offering a shelter and regular services to prevent abortion. This is how the new ministry for the unborn “Grace to be Born” originated. Just one of the many mercy initiatives that cluster around Bo Sanchez’ movement “Light of Jesus Ministries” like the “Jeremiah Home” for abused girls, “He cares” for street children; “LOJ Prison Ministry” and others.

An Amazing Story
Eugenio Reyes Sanchez Jr., widely known as Bo Sanchez, is a best-selling author, entrepreneur, Catholic lay preacher and minister. He is nicknamed the “Preacher in Blue Jeans.” He was born in 1966 in Caloocan City to Eugenio and Pilar Sanchez.

On September 9, 1980, the “Light of Jesus” held their first prayer meeting at the Sanchez home in Quezon City. A week later, at the second prayer meeting of the group, 13-year-old Bo Sanchez gave his first talk. He has not stopped preaching since then.

His work as a lay preacher has brought him all over the world. He is the founder of one of the largest religious communities in the Philippines, the “Light of Jesus Family.” The community has around 35,000 members in the Philippines and the rest of the world. Through this, he started two gatherings, the annual inspirational convention “Kerygma Conference” and the weekly fellowship and worship called “The Feast” which is at present taking place in more than 200 areas in the country and other parts of the world.

Bo Sanchez is the author of 40 bestselling books and publisher of seven magazines. He also has a weekly TV show; a daily radio program and a daily internet TV show. He founded many organizations such as Anawim, a special home for the abandoned elderly and the poorest of the poor, and Shepherd’s Voice, a media group that publishes the widest read inspirational literature in the country.

A Family Man
Privately, Bo engages in small business and real estate not only for his family’s needs, but also due to his firm belief that one of the most important solutions to his country’s economic problems is to raise up more micro-entrepreneurs. He frequently teaches and writes about financial literacy, believing that our poverty is hugely a product of people’s low financial knowledge.

Recently, he has formed the “Kerygma Family,” a borderless, international, non-physical community. All over the world, people are signing up as members of this virtual community where they receive a great amount of material for their spiritual and personal growth. In another endeavor he is very passionate about, Bo started the Catholic Filipino Academy to help parents who want to teach their children at home. But above all these, Bo believes that his first call is to be a loving husband to his wife Marowe and a devoted father to his sons Benedict and Francis.