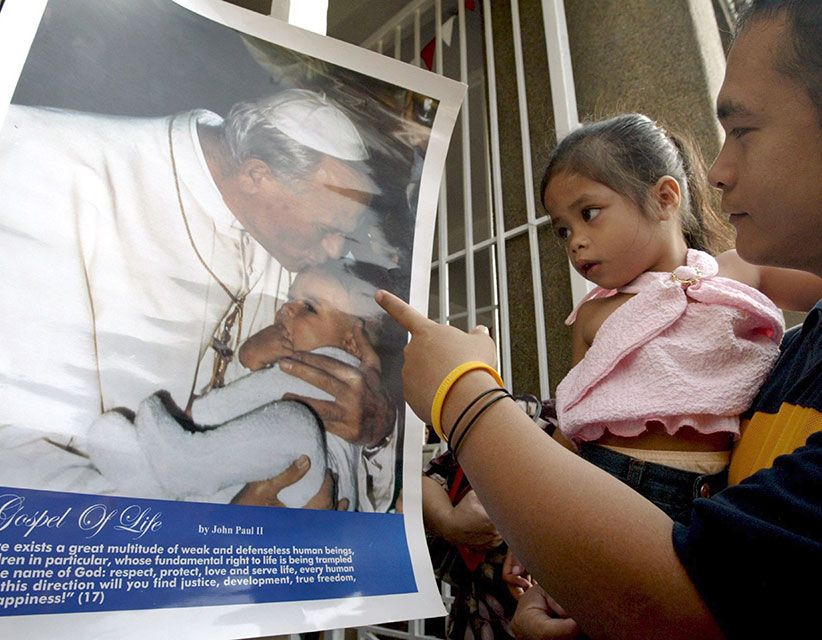 The Philippines’ distinctly “pro-life” culture is facing challenges from ideologies and governments imposing contraception, abortion, euthanasia and the execution of offenders. And yet, groups of Catholics are resisting this “culture of death” by defending the sanctity of life.

The 1987 Constitution of the Philippines is a distinctly “pro-life” and “pro-family” charter. Article II, Section 12 in its “Declaration of Principles and State Policies” declares that “The State recognizes the sanctity of family life and shall protect and strengthen the family as a basic autonomous social institution. It shall equally protect the life of the mother and the life of the unborn from conception.”

This article is in line with the traditional self-image of the Philippines as a country that values and celebrates life. Nevertheless, the Philippines’ traditionally pro-life culture has faced challenges for decades from what Pope St. John Paul II has called “the culture of death”, manifested most particularly in contraception (especially abortifacient contraceptives, which prevent living embryos from being implanted rather than simply preventing conception), abortion, euthanasia, and the execution (whether “legal” or “not”) of real or suspected offenders against the laws of the state.

The Easy Way Out
Since the 1970s, successive Philippine governments have promoted contraception under the guise of family planning in order to curb the country’s growing population. Since its “National Security Study Memorandum 200” (1974), the US government has identified population growth in the developing world as a threat to its national interests with the Philippines among the countries to be targeted for population control.

Since then, the deep involvement of the US and other Western governments in pushing “family planning” (and later, the acceptance of abortion and of “gender ideology”) in the Philippines has more or less continued to the present day.

Perhaps the greatest “triumph” of this alliance between the West and the Philippine government was the passage of the “Reproductive Health Law” in 2012. Among other things, this law intends to liberally fund universal and free access to artificial contraception, introduces “sex education” into the primary and secondary school curriculum, and enshrines the concept of “reproductive health” into Philippine law with all its implications (this term being understood internationally to include abortion rights, for instance).

Although as of this writing (April 2020) the outright legalization of abortion remains remote in the Philippines, the contraceptive mentality fostered for decades has doubtless begun weakening resistance to it. Indeed, media outlets such as Rappler have recently published articles that effectively normalize abortion as the answer to “unwanted pregnancies.”

“Demographic Winter”
There are already ominous signs of a future “demographic winter,” something that wealthy countries can ill-afford, developing ones even less so. The Commission on Population and Development reported in December 2019 that the fastest growing age group in the Philippines are senior citizens (who are projected to make up 8.8% of the population or 9.7 million people in 2020), while the age group that has seen the biggest decline in the share of population is the 0-14 age group (from 34% in 2010 to a projected 30.14% in 2020).

Overall, population growth has fallen so fast that the projected Philippine population for July 2020 was revised from 109.9 million to 108.7 million–a difference of 1.2 million people.

The Catholic Church’s (and pro-life movements) opposition to the promotion of contraception is not only motivated by considerations on the morality of contraceptive acts. It is also motivated by the insight that mass contraception represents the easy way out in the face of the more difficult task of defeating poverty by reforming the “economy that kills” (in the words of Pope Francis) and by confronting social and political injustices.

Furthermore, as the experience of Western countries show, the onset of “demographic winter” also brings with it further pressure to legalize euthanasia for the elderly, the weak, and the terminally ill.

Loss of Empathy
A direct challenge to the very concept of the sanctity of life is represented by the “extrajudicial killings” that have spread since the accession to power of the current President, Rodrigo Duterte. Although “EJK’ is unfortunately not new to the Philippines, what is new and very unsettling is the brazenness with which human rights violations and outright murders of thousands of perceived “addicts” are praised by supporters of the current administration.

Even more chilling is the nonchalance if not enthusiasm of many “netizens” for these killings of perceived “undesirables”. It is tempting to dismiss these supporters of killings as mere “paid trolls” and “fanatics”, and many of them are indeed trolls.

However, my own experience is that a lot of these are real people, ordinary citizens (some of whom even claim to be religious) who think of human rights as a nuisance, and who see no problem in solving the problem of criminality by killing “criminals.”

All these have taken place under a head of state who has had no problem in publicly blaspheming God beyond measure, and who speaks about killing people with a surprising casualness.

Leaving to the future the question of whether or not and to what extent President Rodrigo Duterte is legally liable for the “extrajudicial killings” that have taken place under his administration, there can be little doubt that his rhetoric has massively contributed to the change of too many people’s attitudes towards human rights violations and indiscriminate killing. This is also reflected in apparent public support for the planned reinstatement of the death penalty (said to stand at 67 % in mid-2019).

Witnesses To Hope
Given the apparent victory of the contraceptive mentality and the loss of empathy promoted by the spread of “EJK,” it is easy to feel defeatist about the prospects of preaching the Gospel of Life. And yet there are many signs of hope, much light amidst the shadows, which assure us that the Lord will never leave the cause of life defenseless.

Since the 1970’s, small but feisty groups of pro-lifers have kept up a brave and consistent fight against the intrusion of the “culture of death” into the Philippines. Often winning, sometimes losing, they have never given up.

Among the most distinguished of these groups are Pro-Life Philippines,  founded by the late Sr. Pilar Versoza (+ 2012); Human Life International (a US-based pro-life organization that is also active in Asia and Oceania), Alliance for the Family Foundation Philippines Inc. (ALFI), and Doctors for Life-Philippines.

More recently established groups are Youth for Life, Youth Pinoy, Love Life Philippines, and Filipinos for Life. In addition to these specifically pro-life groups, the defense of the sanctity of life in the Philippines has been greatly assisted by Laiko (Sangguniang Laiko ng Pilipinas or the Council of Laity of the Philippines), Daughters of Mary International, and most of all, the Catholic Bishops Conference of the Philippines and their Episcopal Commission on Family and Life.

The Philippine Catholic hierarchy has been one of the most prolific in the world in issuing statements in defense of the sanctity of life. Charismatic and renewal movements such as Couples for Christ (and its various successor bodies) and El Shaddai, among others, have been invaluable over the last four decades in providing both “warm bodies” for pro-life activities and advocacy.

Last but not the least there is the support that has been given by the journalists of Radio Veritas, CBCP News/CBCP Monitor and The Varsitarian of the University of Santo Tomas.

The continued vigilance of these institutions is a sign that the culture of death will always face stiff resistance in this country.

It should be noted that a major characteristic of the Philippine Church’s defense of life is that it has not been limited to issues regarding sexual and family morality. In their numerous pastoral letters, the Philippine bishops, especially since the 1970s, have also been vocal about social inequalities, the demands of social justice and–more recently– the defense of the environment from further degradation by human greed and waste.

The Philippine pro-life movement has been vocal against plans to reinstate the death penalty in the Philippines, and recent annual “Walks for Life” organized by Laiko have also featured calls against the “war on drugs” that has become the excuse for “EJK,” as well as the destruction of the environment.

All these show that the Philippine pro-life movement has a “whole-life” approach to the promotion and defense of the sanctity of life. It is an approach that is rooted, most of all, in the Gospel of Jesus Christ, the living Word that sustains the pro-life movement’s hope even in the face of evil.

For over two decades, the indigenous people (IP) of Mindanao, Philippines, have been fighting for the salvation of their ancestral lands. For the past five-and-a-half years, 70 IPs have died. Rich in…