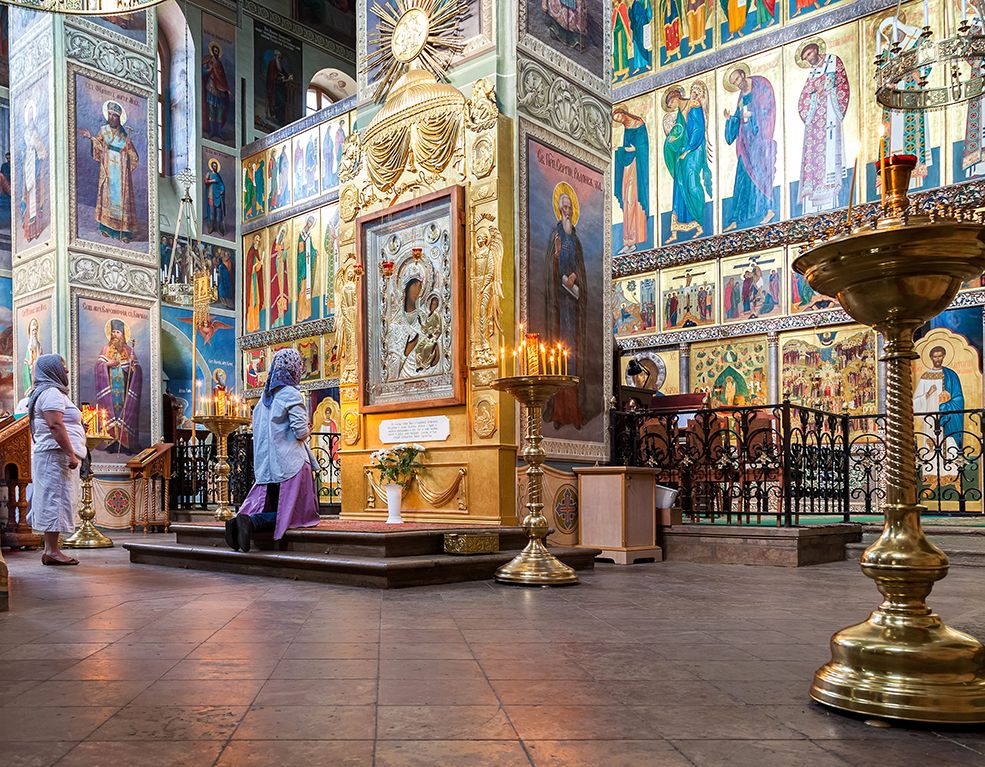 The war in Ukraine has put Orthodox Christianity and inter-Orthodox relations in the spotlight. But what exactly is Eastern Christianity? Where does it come from, and what are its virtues and drawbacks?

Pope John Paul II, originally from Poland, a land that borders the Eastern Christian world, famously said that the Church should breathe with two lungs. By this, he meant that both the Western and the Eastern Christian traditions are true expressions of the faith and should nurture each other and their faithful.

Unfortunately, history has shown that the different traditions have often been at odds and even in open conflict, and part of this is due to the very different perspectives they have on political and social life, and church structures.

In the first centuries after the Church was founded by Jesus Christ, a few main centres immediately stood out. There was Jerusalem, of course, followed by Antioch in present-day Turkey, Alexandria, Egypt, and also Rome. These four cities were in the sphere of influence of the Roman Empire which was also marked by two traditions, the Western, centred on Rome, and the Eastern or Greek tradition, centred on Byzantium, later Constantinople, now known as Istanbul.

Rome gained prominence for being St. Peter’s diocese, although he was previously bishop of Antioch, and his successors claimed primacy, coming to adopt the title of Pope. But the other main cities also remained very important and came to be known as Patriarchates, the founding cities of Christianity.

Later Constantinople, due to its importance in the Roman Empire, would also be raised to that rank. These five original Patriarchates of the Ancient Church formed what is known as a Pentarchy.

For centuries, the different traditions lived in communion. However, successive misunderstandings, now taken to have been more political than theological, first caused a split after the Council of Chalcedon, and then a major schism in 1054, when the Pope and the Patriarch of Constantinople issued mutual ex-communications.

The first split led to the creation of what is currently known as the Oriental Orthodox Communion and includes, among others, the Coptic, Ethiopian, and Armenian churches, the latter having developed as an independent tradition outside of the influence of the pentarchies. The second split divided the churches under the influence of Constantinople from Rome. The current Eastern Orthodox communion includes the many Churches of Eastern Europe.

From the beginning, the Western and Eastern approaches to ecclesial organisation differed. Despite political pressure, Rome preferred a centralised style, with each bishop reporting directly to the Pope who oversaw the Church as a whole. The Eastern Churches, however, soon developed into a communion of national or ethnic-based churches. This is, of course, a simplification, but it explains why centuries later we have one Western Catholic Church and dozens of national or ethnic Orthodox churches.

Western Christianity would benefit immensely from the Age of Discovery when Portuguese and Spanish sailors took the faith to other continents. This is why from Brazil to the Philippines, and other parts of Asia and Africa, Western Christianity prevails, be it in the form of Catholicism or the reformed Protestant traditions that broke away from Rome over the centuries.

Religious Nationalism
The prevalence of different Eastern churches is a source of immense cultural, spiritual, and liturgical wealth for Christianity. A Byzantine Divine Liturgy, or an Antiochene Syriac Qurbana, would seem fascinatingly incomprehensible to most Catholics but are genuine and perfectly valid expressions of the Eucharistic celebration we know as the Mass.

The monastic tradition owes its existence largely to the Desert Fathers, who lived under the influence of the Alexandrian Church and produced a trove of spiritual writings, the most famous of which, the Philokalia, is considered a masterpiece. Not to mention the marvellous artistic traditions, from the music to the gorgeous icons that decorate Eastern churches all over the world, in styles ranging from the gold and silver-plated Russian to the colourfully naïf Ethiopian.

All of this was preserved in a wide variety of languages and scripts, some of which are only kept alive because of their use in the liturgy, such as Syriac, the closest existing language to the Aramaic spoken by Jesus.

Downsides
There are, however, some downsides. A church that has become too closely embroiled with a particular ethnic group will have trouble evangelizing because potential converts will need to embrace not only religious beliefs but social and cultural traditions as well. Take the Coptic Church, for example.

The Copts pride themselves on being the descendants of the original inhabitants of Egypt, meanwhile invaded by Muslim Arabs. A Copt will bristle at being called an Arab, and although in many ways they have adopted Arab customs, their liturgies and sacred texts are written in Coptic rather than Arabic.

One could even say that the Coptic identity has been formed to a large extent over the past millennium in opposition to the Arab identity, which means that if an Egyptian Muslim were to think of converting to Christianity, he would probably find it difficult to adapt. The same happens with Syriac, Assyrian, and Chaldean churches in the Levant, and with Armenian Christian churches all over their own diaspora, which also explains why converts generally find a more welcoming home in Evangelical communities or in the Latin Church.

The traditional organisation of churches by national groupings also has a tendency to produce a promiscuous relationship between Church and State. Not that the West has been immune to this over the past 2000 years, but in the East, it has become part of the culture.

A “national” church is much easier to manipulate than an international church shared by neighboring countries and peoples. This tendency even finds its way into the mentality of the clergy, leading to a phenomenon officially condemned as a heresy called Ethnophyletism, or religious promotion of nationalism.

A look at what is certainly one of the major events of the year, the Russian invasion of Ukraine shows exactly how dangerous these concepts can be. From the earliest days of the war, the Russian Orthodox Church, which for years has been wrestling with Constantinople for primacy among the Orthodox churches, and enamored by a messianic vision of Russia’s role in the world, has been endorsing Putin’s war and imperialist ambitions.

When the Patriarch of Moscow speaks of Ukraine, it is not as a neighboring country but as a part of ‘Holy Rus’, which in Russian nostalgia refers to the area historically under Russian influence, that is, Russia proper, Belarus, and Ukraine, or, to some, the whole former Soviet Union.

The refusal of Patriarch Kirill to condemn Russian aggression on Ukraine hit ridiculous levels on May 3, when he said in a sermon that it is truly remarkable that a country as powerful as Russia has never attacked anybody, only defended its own borders.

Ukraine, however, is not immune to this sort of nationalist rhetoric. Although far less delusional, the leader of the Ukrainian Orthodox Church, which was granted formal independence from Moscow in 2019, frequently employs language exalting Ukrainian virtues and deriding Russians as enemies that few Catholics would ever expect a bishop to use.

The ethnic-national dimension of Eastern tradition has made the different Orthodox churches active players in the conflict rather than bridge-builders and peacemakers, a situation that should give all Christians pause for thought.

A Rainbow Of Churches
To think that these virtues and difficulties are all external to the Catholic Church would be a mistake. Although around 90% of the world’s Catholics do belong to the Western tradition, that is, the Roman or Latin Church, the fact is that there are more than 20 other Catholic Churches that operate in full communion, and yet with almost full autonomy from Rome.

With a few exceptions, these churches were almost all founded over the centuries by hierarchs from Orthodox churches who sought communion with Rome, breaking with their own superiors. Accepted by the Popes, these formed their own Catholic churches, maintaining their organizational, liturgical, spiritual, and cultural heritage. Thus, for example, there is a Ukrainian Catholic Church, which any Westerner would be hard-pressed to distinguish from an Orthodox Church. However, the Ukrainian Catholic Church is fully Catholic and actually represents 10% of the Ukrainian population, making it the largest Eastern Catholic Church.

This means that the Catholic Church, as a whole, does contain some of the aforementioned problems, but far more importantly, it means that it contains all the different Christian traditions that exist, which is a tremendous blessing and something that all Catholics, East and West, should strive to learn more about.

The Cost Of Our Misbehaviour

A young nation, Timor-Leste is attempting to eradicate corruption as the most pressing problem the country is facing. The Church must use its institutional power to weave a narrative that corruption…