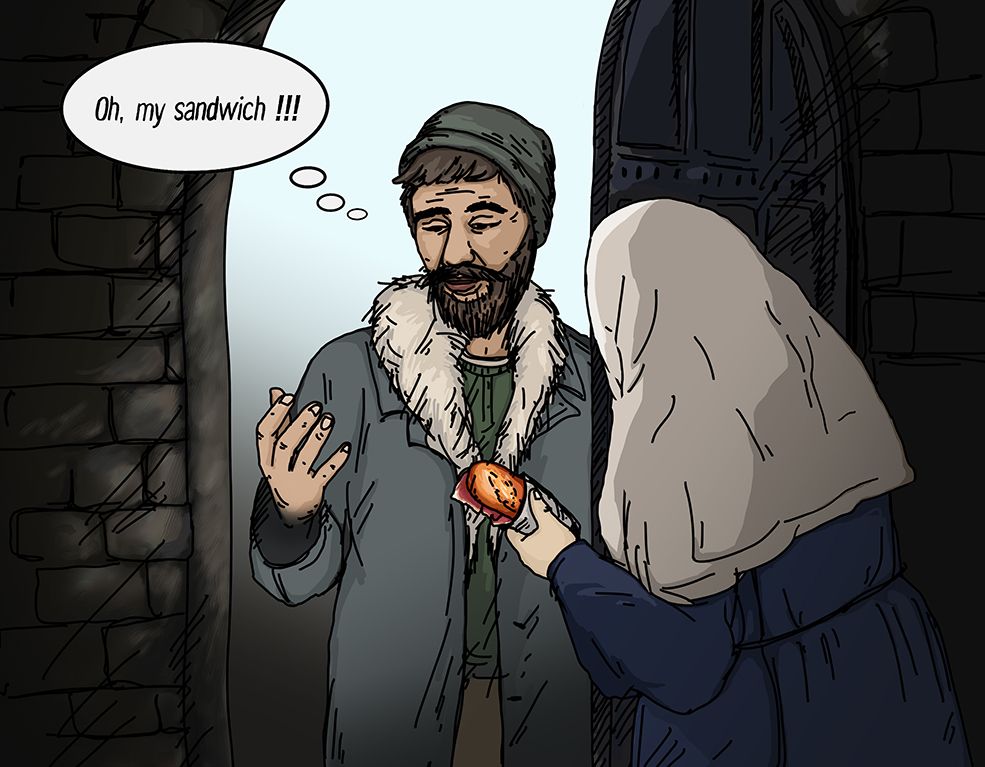 In the beautiful city of Malaga, Spain, various missionary institutes gathered for a week of missionary animation: White Fathers (Missionaries of Africa), Spiritans, Combonis, and the Mercedarian Sisters of Berriz. They visited schools, parishes, youth groups, and sodalities.

Sister Anna was being hosted in the convent of the Sisters of St. Vincent where Fr. Stefano went to look for her. They were supposed to go and talk to the students of a school called “Los Olivos.” Hallmarks of Fr. Stefano: bushy beard, hair that the wind of that day made even more tousled, a sheepskin jacket on his shoulders, Russian pilgrim-style sandals–in short, the typical Comboni of the road in the 1980s.

He pressed the doorbell and heard the steps of someone approaching. An eye peered at him from the inside through the peephole; then, the steps faded away. A few moments of silence followed. Finally, the door opened, but only a hand appeared with a sandwich for the ‘begging tramp.’

Fr. Stefano took it, thanked her, and remained there waiting. The Sister who performed the act of charity lingered behind the door, keeping an eye on the peephole. Since he didn’t give signs of going away, she asked: “Do you need something else?” “Yes. I have come to look for Sister Anna to go to the school.” “Ah, you are the missionary!” “That’s right.” “Oh, excuse me!” apologized the nun, quickly snatching the sandwich and leaving the missionary empty-handed. He hadn’t even had breakfast and was already eating with his eyes, the sandwich which he had not asked for but had been given with such courtesy.

Many years ago, the community of missionaries was experiencing repeated small robberies on their property. One night, two blankets were gone; on another occasion, the ladder; next, even a few frozen…