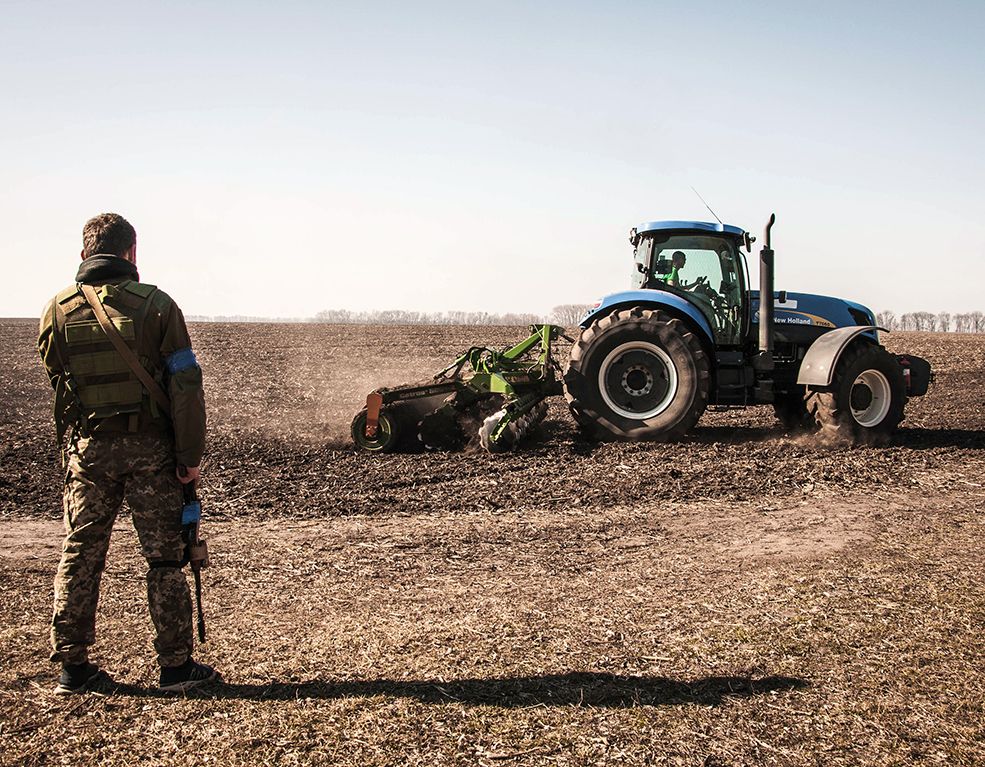 War in Ukraine, Hunger in the World

By interrupting the supply chain of grain and fertilizers for agriculture, the Russian invasion of Ukraine is creating a global food crisis that will affect hundreds of millions of people, especially in the poorest countries. An explosion of social conflict is feared.

In Northern Ukraine, farmer Grigoriy Tkachenko refused to abandon the village of Lukashivka, near the city of Chernihiv, so that he could provide for his family and feed the soldiers defending the homeland. But his farm was destroyed by bombs from the Russian invaders and now he is desperate because “almost nothing is left.”

In Somalia, with no bread and no water, Suray had to leave home in a desperate quest to save her seven children. They walked for two weeks to reach Baidoa, the capital of South West State. None of the children survived, nor did the baby she was nursing. To bury them, villagers helped the mother dig a shallow grave in barren land after the most severe drought in four decades. “I was lost in my grief,” she said.

The stories of Tkachenko and Suray, told by The New York Times and World Vision, respectively, are some of the human dramas exacerbated by Russia’s invasion of Ukraine, the two largest “breadbaskets of the world.”

The World Food Programme (WFP) has admitted that it has cut daily rations to 3.8 million people in Yemen, Chad, and Niger in order to meet the needs of another three million in Ukraine and neighboring countries. “We are taking food away from the hungry to give to the starving,” lamented David Beasley, the executive director of this UN agency, which has never needed to do this in its sixty years of existence.

Ukraine and Russia are the engines that power the world. The invasion coincided with the beginning of the planting season, turning over 30% of Ukraine’s fertile agricultural land into war zones right away, according to the UN.

Then the Black Sea ports were closed, preventing exports. This was followed by another surge in sky-high oil prices, making the purchase and distribution of basic goods more expensive, leaving the poorest and most vulnerable states in Africa, the Middle East, and Asia, already ravaged by the perfect storm of conflict, climate, and COVID-19, in a catastrophic situation.

Since February 14, Russian planes, tanks, missiles, and mercenaries have been reducing towns and villages, houses, schools, hospitals, and other buildings to rubble. But the destruction that, according to the UN, could cause “the biggest global food crisis since World War II” is that of the agricultural fields, which cover 70% of the surface of Europe’s second-largest country.

With 32 million hectares of arable land, Ukraine provides half of the world’s exports of sunflower seeds and derivatives to the European Union and is one of the largest exporters of wheat and corn.

As a result of the war, at least 20% of April’s crops are lost, the Prime Minister reported. Although many farmers had thrown seeds into the ground and the government had exempted them from military service and territorial defense, the reality is that many left the fields they cultivated, or the trucks and freight trains they drove, to fight on the front lines. In addition, Russian forces have mined many properties and destroyed machinery, storage silos, and fuel depots, making recovery even more difficult.

Some of the main grain-producing areas are in the Donetsk and Luhansk regions of eastern Ukraine, where Russia, which supports separatist groups there, is moving its troops after having been unable to conquer Kyiv, the capital.

However, even if the war-which has caused 4.3 million refugees and 6.5 million internally displaced persons-were to stop now, it would lack time to resume exports, not only of grain but also of fertilizers (Russia is the world’s largest producer).

The price of wheat, which had already risen 80 percent between April 2020 and December 2021, is likely to continue to rise if military operations do not cease and ports and railways are damaged, David Laborde, a researcher at the International Food Policy Research Institute in Washington, told the New York Times.

With the next harvests compromised, in four months, “the situation will get really grim because countries that depend on wheat from Russia [the largest producer, with 76 million tons in 2021, of which 35 million to export] and Ukraine will be hit hard.”

Unprecedented Crisis
Almost 283 million people currently face acute food insecurity or are at high risk, and 45 million are “on the brink of starvation,” WFP warns, noting that these numbers could double due to the war between those who supply it with 50% of the wheat with which it feeds more than 115 million mouths in 117 countries and territories.

“People will react if they can’t afford food,” predicts Catherine Bertini, a researcher at the Chicago Council and former WFP director, in a statement to Foreign Policy magazine, recalling the popular uprisings that in 2011 helped topple dictatorial regimes in Egypt and Tunisia. In Sudan, for example, thousands of people have taken to the streets, without fear of bullets and tear gas, to protest an 80% increase in wheat from Russia and Ukraine. In Iraq, hundreds of farmers have rioted against rising fertilizer prices.

Arif Husain, chief economist and research director at the UN World Food Programme, has no doubt that today’s crisis is much worse than those of 2006-2008 (when average prices for maize, rice, and wheat increased by 70%, 180%, and 120% respectively, pushing 105 million people into poverty) and 2010-2012 (which affected 40-44 million people). “It’s worse because now we have a war in Yemen, a war in Syria, a war in Ethiopia, a war in Northern Nigeria, a war in Afghanistan...”

“If you think hell has come to earth, you’d better get ready,” warned David Beasley, the WFP’s executive director, in an interview with the Politico website. “If we neglect North Africa, North Africa will come to Europe; if we neglect the Middle East, the Middle East will come to Europe,” in migratory waves. And economic conditions have not only deteriorated in those regions [see pages 22-23].

“In Paris, Chicago, or Brussels, what do you think will happen if there isn’t enough food? It’s easy to sit in your ivory tower when you’re not the one going hungry,” Beasley criticized, after a meeting in Belgium, where he went to ask for an increase in contributions so that the 2020 Nobel Peace Prize-winning WFP can help those most in need.

Between Eating Badly And Being Hungry
The immediate solution, Arif Husain recognizes, is monetary. Because while enough food is still being produced to feed the world, the big problem remains price and access in a global supply chain that lacks resilience and sovereignty.

Let’s see: although consumption has greatly accelerated in recent decades, due to population growth demand increases, international trade in cereals represents only a small part of the production, explains economist and food engineer Bruno Parmentier on the Futura Planète website. Most cereals are consumed by the countries that produce them. “In 2020, for example, only 119 million of the 761 million tons produced crossed borders.”

The countries that produce more than they consume are few; for wheat, mainly Russia, the US, Canada, Ukraine, France, Australia, and Argentina; for rice, India, Pakistan, Vietnam, Thailand, and the US; for corn, the US, Brazil, Argentina, and Ukraine.

“Unfortunately, the structurally importing countries outnumber the exporting ones,” notes Parmentier. “They lack agricultural land and natural resources, and the situation gets worse from year to year because populations increase, but the area of arable land or the availability of water keeps decreasing.”

Industrialized states like Switzerland, Japan, or South Korea may be unable to feed themselves, but they will have no problem buying, at any price, the products they need, Parmentier adds. “This is not the case of Egypt-the world’s largest importer of wheat (12 million tons on average)-which has to feed 102 million inhabitants in a desert, and where the only cultivable valley is that of the Nile, representing only 4% of the country’s surface area.”

War is also an obstacle “in countries where the men are soldiers and the women refugees, the fields are abandoned,” Parmentier stresses. “But they are also unlikely to have access to selected seeds, fertilizers, pesticides, tractors, and threshers or fuel to get them going. And if, by some miracle, they manage to get the crops harvested, their storage, transportation and sales systems won’t be the most effective.”

The war in Ukraine threatens “the real poor of the planet, those whose daily ration of cereals is always the same: either rice, or corn, or cassava,” Parmentier concludes. “They are the most sensitive to rising prices because, for them, it’s the difference between eating poorly and being hungry.”

If the support that UN agencies are begging for does not come, Secretary-General António Guterres predicts “a tsunami of hunger and the collapse of the global food system.”