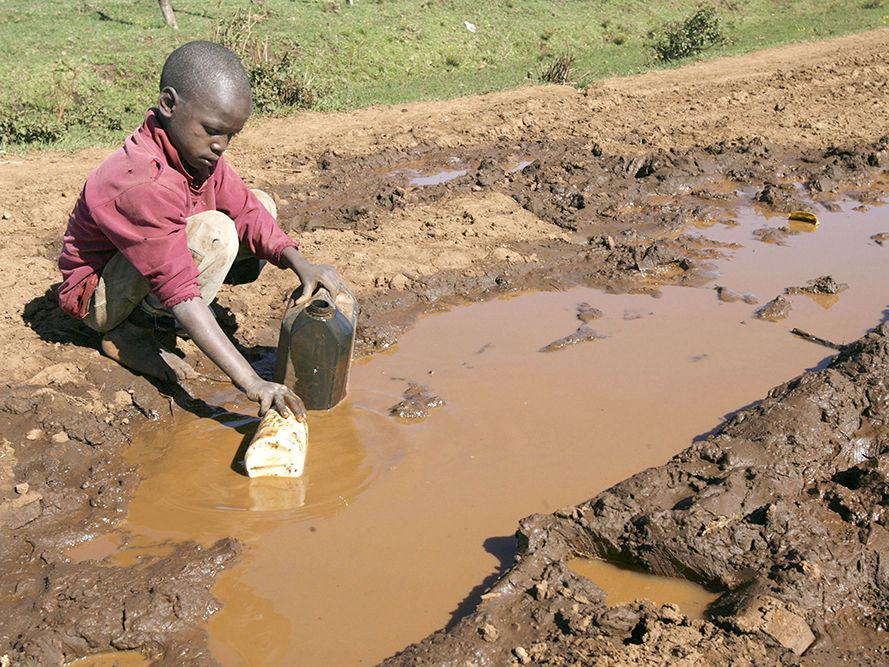 South Africa on the cusp of crisis

South Africa is on the brink of a water crisis. Climate change, the stealing of water, contamination resulting from poor sanitary practices and mining, and the emphasis of water-for-profit, among other reasons, are to blame for this impending catastrophe. Contingency measures are now being put in place by both the national and local governments to avert the situation. However, such plans will be inadequate if leaders do not have the will to implement these measures and the remaining water resources are not managed well.

An ActionAid South Africa report says that South Africa, one of the driest countries in the world, is “on the cusp of a major water crisis that poses a serious and immediate risk to the economy and to social stability.”

As early as 2013, Lester R. Brown, President of the Earth Policy Institute, wrote that peak water is "the real threat to our future."

Peak water is described by Peter Gleick and Meena Palaniappan as “a concept that underlines the growing constraints on the availability, quality, and use of freshwater resources.” Peak water can also be defined as that moment in historic time when the economy transitions from a demand-driven condition to a supply-constrained condition.

Peak water thus implies a supply-constrained economy with a limited capacity to create new jobs which may result in social instability.

South Africa’s national economy is based on national hydrology.

Aquatic ecologists, specializing in the impacts and implications of water quality issues on aquatic biodiversity in African river and lake ecosystems, warned that South Africa is at the transition point of “peak water.” Some warned that South Africa has already reached peak water supply in 2004 and that all four international river basins will transition into absolute water scarcity by 2025. The most vital of these basins are the Orange, Limpopo, and Vaal River or Water Systems.

One of the measures envisaged for the Orange River System (South African portion) to maintain a water balance between the water needs and availability up to the year 2050 is that the water required to supply the current and future social and economic activities, as well as supporting the transfer to the Vaal River System, will have to come from within the Orange/Senqu Basin. This will put additional pressure on the Orange River System.

In terms of the water quality analysis and assessment of water quality issues undertaken, the Department of Water Affairs summarized the task conclusions and recommendations as follows:

• Currently, there is a slight surplus in the System but the growth in water demand over the next 37 years, up to 2050, will cause water shortages over time.

The yield created by Polihali Dam can be shared by the Orange and Vaal users for as long as the Vaal users do not need the full yield of the Dam. The long term effect will be a growing water shortage.

A Department of Water Affairs report found that there will be a dramatic increase in water demand within this WMA as a result of:

• The exploitation of the vast coal reserves in the Waterberg

The challenges in this WMA were summarized, as follows, by the Department of Water and Sanitation in 2013:

• Water resources are nearly fully developed with all available water being highly utilized.

• Implementation of the reserve is expected to result in serious deficits in some of the main river catchments.

• Planning has been made for large new mining developments in the Mokapane-Mogoto area for which additional water will be required.

• Urban and industrial growth will mainly be concentrated in the Johannesburg, Tswane and Polokwane areas, where local water resources already are in short supply and need to be augmented by transfers from other WMAs.

• There are severe eutrophication problems at dams in the WMA.

• Possibility for new power stations and/or petrochemical industries to be developed around the coalfields in the Lephalale area.

• Water pollution, owing to large quantities of effluent discharged into the rivers in urban and industrial areas in the WMA.

It should not be discounted that the former Minister of Water and Environmental Affairs, Edna Molewa, acknowledged, in her briefing to the Parliamentary Portfolio Committee on Recommendations by the Business Processing Re-Engineering Committee on the 16th of April 2013, that 52 villages in Limpopo had no water.

The Vaal River System supplies water to 60% of the economy and 45% of the population of South Africa. To ensure that sufficient water of good quality is available to supply the future requirements of this important area of the Vaal River System, a multi-pillar strategy is required. In terms of the DWS’s Vaal River’s Reconciliation Strategy, one of the measures, which was to reuse treated effluent, started with mine water by 2014/2015. The reason why the treatment of mine water was prioritized is because of its concentrated salt stream.

Acid Mine Drainage (AMD) is associated with mining activity and is a long-recognized problem. In 1903, AMD was referred to as an established phenomena on the Witwatersrand. The threat of AMD to South Africa’s scarce water resources was, however, only recognized by the Department of Water Affairs in 2012 after 10 years of uncontrolled decant of raw or untreated AMD from the West Rand Basin and the devastating consequences to the downstream water users and ecology.

Currently, two high-density sludge projects in the Western (West Rand) Basin and the Central Basin are operational for the immediate treatment of AMD. These plants are presently treating around 100 million liters of AMD daily, whereupon an equivalent volume of the neutralized water is discharged to the environment.

It should be noted that the high-density sludge process merely adjusts the pH of AMD. In most cases, metals will precipitate out of solution if the pH is adjusted upwards, i.e. the water is made more alkaline. It should, furthermore, be noted that the metals in AMD have not simply disappeared but that they have merely changed to a different oxidation state, from a soluble form to a solid form. The process could be reversed and the contaminants mobilized should the water become acidic.

The water quality results of the neutralized AMD, which were supplied to the Federation for a Sustainable Environment by the Department of Water Affairs in 2013, showed sulphate levels of between 2,395 and 3,012 mg/l. The World Health Organization’s standard for sulphate in drinking water is 200mg/l. Sulphate concentrations of 600 mg/l and more cause diarrhea in most individuals and adaption may not occur.

The highest cost burden of combating salinity is currently being carried by the household sector and not by industry as might be expected. The “polluter pays principle” is based on the internalization of externalities and, therefore, is central to the equitable resolution of pollution costs currently being borne by the end users.

Failure to establish a sustainable long-term solution to AMD would lead to prolonged reliance upon funding from the general public treasury, increase of the salt load in the Vaal River, which could only be mitigated by releases from the Vaal Dam, and a subsequent deficit in the Upper Vaal, which is now having severe economic impacts because of the drought.

Since AMD is not treated to a level where the salt load is removed, the Upper Vaal has gone into deficit and restrictions have been placed on consumers in the Upper Vaal.

With the Upper Vaal in deficit, there would then be no possibility of transferring water into the Olifants, Crocodile West/Maricoand Limpopo catchments, and economic activities in six provinces could be affected if water consumption is curtailed.

The Department of Water and Sanitation (DWS) identified a number of weaknesses with regard to water quality management.

• Water Quality Management roles and responsibilities are not clear.

• Inadequate or insufficient enforcement, conviction and punitive measures for non-compliance due to inadequate integration in DWS; enforcement relies heavily on functions of / information gathered by other DWS sections.

• Insufficient succession planning and gaps created by loss of both experienced and recently trained staff.

• DWS, currently, does not have active contracts with a number of private laboratories and reduced resourcing of water quality monitoring, leading to backlogs at DWS’s laboratory.

• Inadequate delegations within DWS with regard to water quality (WQ), suppressing innovation. Lack of formal policies and guidelines on how DWS should deal with innovative technologies, e.g. what criteria should be met in terms of acceptable risk, or what stance DWS should take towards new technologies.

• Long delays in decision-making at most senior levels in DWS.

• Uneven and silo-like engagement of stakeholders.

It is apt to conclude with the recent comments of Mike Muller, a former director-general of the Department of Water Affairs and, currently, a visiting adjunct professor at Wits University:

“South Africa’s water security depends on good leadership and institutions with strong technical capabilities…at present, leadership is weak, mainly because its technical foundation is failing… the right priorities are not identified and responses to key issues are ineffective…there is a growing evidence that the national department is failing in this regard and wasting time, energy and money on the wrong things. So the real water security crisis is one of management.”

The creation of the new autonomous region in Mindanao is another means to the attainment of elusive peace in this part of the Philippines after decades of violence and conflict. This development is an…

A Generation of Movers

Millennials make up 30% of the total population in the Philippines and by 2020 will constitute 50% of the work force. But who are these millennials and what kind of creatures are they? A long-time…