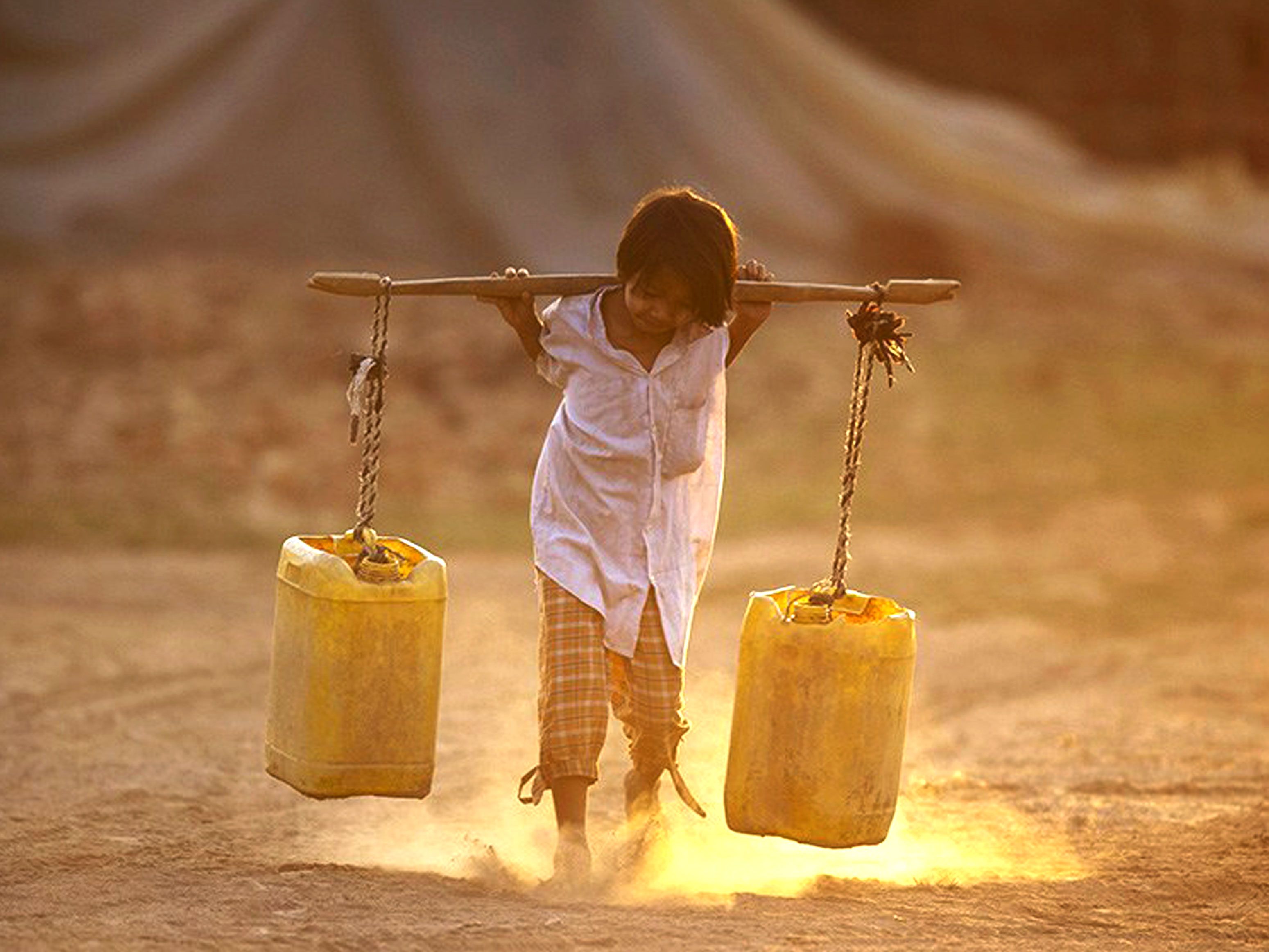 As part of its post-2015 development agenda, the United Nations is spearheading a global campaign to help resolve the world’s growing water crisis, possibly over the next 15 years, targeting the period 2030. But over 880 million people still do not have access to safe drinking water today, according to the latest figures. The growing demand for water is projected to increase by over 40 percent by 2050. And an estimated 1.8 billion people, out of a total world population of over 7 billion, will live in countries or regions with water scarcity, according to the U.N..

When world leaders held a summit meeting last September to adopt the U.N.’s post-2015 development agenda, they also approved 17 sustainable development goals (SDGs), including the provision of safe drinking water to every single individual in the world by 2030.

But will this target be reached within the 15-year deadline?

Sanjay Wijesekera, Associate Director of Programs, and Chief of Water, Sanitation and Hygiene at the children’s agency, UNICEF, said: “As we enter the SDG era, there is no doubt that the goal to get ‘safely-managed’ water to every single person on earth within the next 15 years is going to be a challenge. What we have learned from the MDGs is that water cannot be successfully tackled in isolation.”

He said water safety is compromised every day from poor sanitation, which is widespread in many countries around the world, particularly in South Asia and sub-Saharan Africa.

In fact, some 1.8 billion people globally are estimated to be drinking water which may be fecally-contaminated. It means UNICEF and others working on access to safe water will have to redouble their efforts on improving people’s access to and use of toilets and, especially, to end open defecation.

“As we address water, sanitation and hygiene, we must also take into account climate change. Droughts, floods, and extreme weather conditions all have an effect on the availability and the safety of water,” said Wijesekera.

He also pointed out that some 160 million children, under five, live in areas at high risk of drought while around half a billion live in flood zones.

“For UNICEF, this is very urgent as diarrheal diseases linked to inadequate water, sanitation and hygiene kill more than 800 children, under five, every single day,” he added.

In July 2010, the U.N. General Assembly adopted a historic resolution declaring water and sanitation a basic human right asserting the U.N.’s role in ensuring the availability of one of the world’s finite resources.

Still, Barbara Frost, Chief Executive Officer of the UK-based WaterAid, says it’s shocking that water will cost a poor person in the developing world as much as half of their income, for an amount that is about one-third of our average daily use in the developed world.

She pointed out that clean drinking water is a right and yet one in 10 people around the world live without it. Increased competition for water resources and climate change is only exacerbating the crisis which, along with lack of sanitation, is responsible for the deaths of more than 315,000 children, under five, each year.

“We call on governments to take urgent action, and keep the promise of the U.N. global goal to deliver clean water to everyone, everywhere, by 2030,” Frost said.

Looking at the problem from a different perspective, the United Nations has already warned of the increasing use of water as a weapon of war in some of the world’s conflict zones, largely in the Middle East and Africa.

U.N. Secretary-General Ban Ki Moon has warned that preventing people’s access to safe water is a denial of a fundamental human right” while the “deliberate targeting of civilians and depriving them of essential supplies is a clear breach of international humanitarian and human rights law.”

U.N. Deputy Secretary-General Jan Eliasson of Sweden recounts a trip to war-ravaged Dafur in Sudan where, arriving in a village, he was met by a group of women chanting “water, water, water.” The enemy militia, he said, had poisoned their well.

In Iraq, the Islamic State in Iraq and Syria (ISIS) has cut off water supplies to subjugate the population while deliberately flooding towns and villages, displacing thousands of civilians.

Eliasson said ISIS has also directed its operations against Iraq’s hydroelectric dams, specifically the Mosul Dam, endangering the lives of over 500,000 people – if and when the dam bursts.

According to the Paris-based U.N. Educational, Scientific and Cultural Organization (UNESCO), one-third of all river basins are shared by more than two countries.

Globally, there are 262 international river basins: 59 in Africa, 52 in Asia, 73 in Europe, 61 in Latin America and the Caribbean, and 17 in North America. Overall, 145 countries have territories that include at least one shared river basin.

UNESCO says there have been more than 1,831 “international interactions” recorded, including 507 conflicts, 96 neutral or non-significant events. Still, there were more than 1,228 instances of cooperation on shared water.

“Despite the potential problem, history has demonstrated that cooperation, rather than conflict, is likely in shared basins,” says UNESCO.

On a more positive note, Eliasson says tensions over water resources have, historically, led to more collaboration than conflict.

As an example, he cites the 1960 Indus Water Treaty between India and Pakistan, which has survived three wars and still remains in force.

There is also “limited cooperation” among Israelis, Palestinians and Jordanians over the equitable distribution of water in the conflict-ridden region.

“Hydro diplomacy” is a reality, he says.

The hotspots are countries, areas or ecosystems that have overlapping challenges such as poor access to water and sanitation, limited water availability, deteriorating water quality, and increased exposure to climate change and water-related disasters.

In the summer of 2010, approximately one-fifth of Pakistan was inundated; affecting more than 20 million people in the flooded areas along the length of the River Indus. Flooding also destroyed more than 1.6 million acres of crops, according to DESA.

For example, India is in danger of being ill-prepared for natural disasters and climate change, while unsustainable water-use patterns are evident in Pakistan and Uzbekistan. Basic access to sanitation remains a major concern for Bangladesh, said DESA.

These are referred to as Asia’s major breadbaskets. Water tables in these areas are falling by 2 meters to 3 meters a year, with serious impacts on agriculture and food security.

Meanwhile, water-rich countries, such as Malaysia, Indonesia, Bhutan and Papua New Guinea, are facing urban water supply and quality constraints. Domestic sewage is a particular concern because it affects ecosystems near densely-populated areas.

Approximately 150 to 250 million m3 per day of untreated wastewater from urban areas is discharged into open water bodies or leached into the subsoil.

Asked how best the water crisis can be resolved, Darcey O’Callaghan, International Policy Director at Food and Water Watch, said the global water crisis must be addressed in two primary ways.

First, clean, safe, sufficient water must be provided to all people because water is a human right. Affordability is a key component of meeting this need.

Second, water sustainability must be protected by not overdrawing watersheds beyond their natural recharge rate. If water sources are allowed to run dry, then the ability to protect people’s human rights is lost.

To keep water affordable, she pointed out, it must be managed by a public entity, not by a private one for profit. Allowing corporations to control access to water has failed in communities around the globe, resulting in poor service, higher rates and degraded water quality.

“This is a recipe for disaster. Profits should not be the priority when it comes to providing water and sanitation services to people.”

Asked if the public should pay for water, she said there is no longer any question that water and sanitation are both human rights. What the public pays for is water infrastructure upkeep and the cost of running water through the networks that deliver this resource to our homes, schools, businesses and government institutions.

She said the U.N. has established guidelines for water affordability – 3% of household income – and these guidelines protect the human right to water. If the water service fee is beyond a household’s ability to pay, it is a human rights violation.

In some places, particularly in the Global South and in parts of the United States, the challenge of providing water and sanitation still exists. One approach that has shown promise is public-public partnership (PUP), she noted.

In contrast to privatization, which puts public needs into the hands of profit-seeking corporations, PUP brings together public officials, workers and communities to provide better service for all users more efficiently.

“The benefits of scale and shared resources can deliver higher public efficiencies and lower costs. These public partnerships, whether domestic or international, improve and promote public delivery of water through sharing best practices,” said O’Callaghan.

"Water also underpins progress on many other different aspects of the Sustainable Development Goals, including health, education and gender equality. For example, Goal 6 is essential to achieving Goal 3, as access to safe, clean water will help in reaching targets for improving global health, including reducing infant mortality and reducing water-related diseases.”

Since world leaders adopted the 2030 Agenda in September last year, she pointed out, national governments have been starting to get to grips with the implementation of this ambitious program.

“It is vital that governments recognize these strong links between Goal 6 and the other goals. Only through an integrated, joined-up approach can member states start to make progress across the 2030 Agenda as a whole.“

She said the upcoming High-Level Political Forum in July provides an opportunity to address this and other challenges in the implementation of the SDGs and ensured momentum is not lost since their adoption.

“This is a critical moment for follow up and review of the 2030 Agenda, including galvanizing the global community to meet the challenge of universal access to water by 2030," she declared.

An Only Son, But Never Lonely

A Filipino missionary, Jemboy Caspis, hailing from General Santos, recounts how he faced the dilemma of wanting to be a priest yet facing difficulties because he was an only son. Today, he is working…