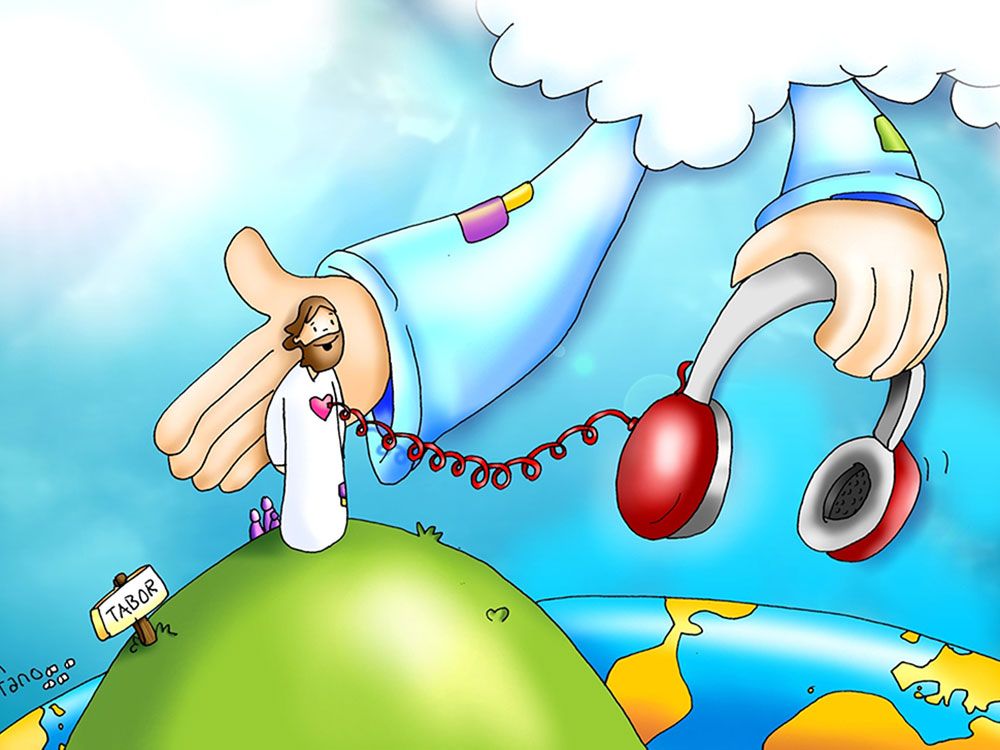 In the encounter on the mountain, Jesus reveals Himself and manifests His identity as the Son of God. In each encounter, He reveals Himself and is transfigured so that we may experience His glory and our life, as disciples, may be transformed by faith and faithful following.

The Synoptic Gospels tell us of a special encounter that three apostles (Peter, James and John) had with Jesus on the mountain. As we enter into this narrative, our curiosity does not stop growing as we contemplate the scene, whatever the text we choose for our reading and meditation (Matthew 17: 1-8, Mark 9: 2-10, Luke 9: 28 -36).

This encounter takes place in a special environment. On the one hand, it happens on the initiative of Jesus, who takes these three apostles to the top of a mountain. For us today, this indication of the meeting place may have a mere aesthetic, ecological sense. But for the readers of the first Christian generation coming from Judaism, this statement was full of meaning: it made them think of Mount Sinai and God’s revelation to Moses.

On the other hand, this encounter is situated immediately after Jesus clarifies the necessary conditions to follow Him. After Peter’s confession of faith in Caesarea Philippi (Mt 16: 13-20, Mk 8: 27-29; Lk 9: 18-21), Jesus begins to speak openly, with His disciples, about His passion and death which awaits Him in Jerusalem and the conditions to follow Him.

These conversations of Jesus with the disciples are mentioned three times in the Gospels and follow a common narrative pattern: first, we have the announcement of Jesus that speaks of His passion, death and resurrection; then the reactions of the disciples, who wonder at this vision of a suffering Messiah; and, finally, the words of Jesus that explain the conditions of following Him (embracing the cross, humility and service as marks of discipleship).

The Gospels make us realize that this encounter takes place in a time of crisis, brought about by Jesus’ decision to head on to Jerusalem. For Jesus, to go up to Jerusalem is to go to the glory of the Father, to His hour. The disciples, however, see their going to Jerusalem as a danger (because of the opposition of the Pharisees and the authorities), and the way of suffering and death as useless and contrary to their messianic expectations.

The disciples question themselves about the identity of Jesus with two questions: after all, who is Jesus? And how can you follow Him? Jesus seeks to answer these questions and overcome the scandal of the announcement of His passion: He speaks about the hour of the Father and of His resurrection. But this teaching seems to be ineffective, and remains incomprehensible: the disciples do not understand Him and are afraid of exposing their doubts.

In this situation, Jesus “takes Peter, James, and John, and led them up a high mountain by themselves.” He wants to respond to the difficulties of His disciples and offer a glimpse of His glory, realizing what He Himself had said: “There are some standing here who will not taste death until they see the Son of Man coming in His kingdom.” (Mt. 16: 28, Mk. 9: 1). Jesus wants to anticipate, in the eyes of His frightened disciples, His glory, the testimony of God on His behalf.

Theophany of the word

The center of the narrative of this unique encounter of the three apostles with Jesus, and of our contemplation of this scene, is the theophany of the Word: the revelation of the Father’s voice, which affirms Jesus as the Beloved Son, in whom the Father delights, with whom He establishes His covenant. The voice of God presents Jesus as the definitive prophet: “Listen to Him!” Before dying, Moses had promised the Israelites (Deut. 18: 15): “God will raise up a prophet like me; you will listen to Him.”

In the narrative, Jesus appears transfigured in His face and in His garments: thus He manifests His divine condition, hidden in His human condition (Phil 2: 1-11); the voice of God invites to follow Jesus, listening to the Son; all the Old Testament witnesses in favor of Jesus, Moses and Elijah appear speaking with Jesus, the new Moses who initiates a new exodus.

In this encounter, leading to the Transfiguration, there are several elements on which we can expand our contemplation, in a crescendo of importance and mystery.

The first is the mountain, typical place of theophanies, the choreography that accompanies the revelations of God: desert space, solitude, fasting and prayer. The question of which mountain it is (Tabor or Hérmon?) becomes secondary: it is the place of the revelation of God in His Word.

The second is the timing of this encounter. Matthew and Mark speak of “six days later”: Moses at Sinai waits six days for the revelation of God (Exodus 24: 15-16). And Luke speaks of “eight days”: the eighth day is the day of glory, of the resurrection of Christ.

The third is the manifestation of the glory, of who Jesus really is, what gives consistency to His life and explains it: there is a transformation, in the sense that appears in the eyes of the disciples who Jesus really is, His glory as the Son of God, which radically transforms His human condition.

The fourth element is the cloud, an element of the divine theophanies, a sign of the presence of God that surrounds and protects Jesus and those who are with Him, just as he had accompanied the chosen people in the desert. It is from the cloud that comes out the voice, which overlaps definitively the fantasies and fears of the disciples: “This is My Beloved Son, listen to Him!”

Meaning of the encounter

This encounter with Jesus on the mountain begins by leaving the disciples stunned: they are silent, they do not know what to think and feel strange until they contemplate the glory of Jesus. So they say the obvious: “It’s beautiful to be here!”

This encounter confirms Peter’s confession of faith (Mark 8:29), but also sends us (the disciples and us readers) to the future, to the resurrection of Jesus. The identity of God and Jesus will be clearly revealed in the passion: God is love beyond all measure; Jesus is the Beloved and Exalted Son. This love, stronger than death, which unites Father and Son, is communicated at Pentecost by the gift of the Holy Spirit, who grafts us into this divine life and makes us capable of following Jesus.

We can speak of the transformation of the disciple in the light of the encounter with Christ transfigured on the mountain. Such an encounter demands a climbing, leaving the plain, as the place of the usual and familiar, of flat spaces inhabited by what is politically and religiously accepted. Such a meeting challenges us to climb the mountain, to conquer a space of silence and inner listening, to enter the cloud of silence that allows the resounding of God’s voice in us.

The apostles Peter (1 Peter 1:22, 2 Peter 1: 16-21) and Paul (Romans 12 and 8, 18-39) speak of this transformation of the mind and of life, born of the Word of God that makes us experience the joy of the Christian life and of following Jesus. This is the gift that we ask for in this contemplation: when we go up with Jesus to the mountain and enter with Him in the cloud of the glory of God, may this encounter rescue us from the doubts that assail us about the direction and meaning of our lives.

Disciples at the feet of the Master

The joy of living, the capacity to receive and to be a gift for others are renewed in the encounter with Christ and in listening to His Word; it is at the feet of the Master that the mission is…

Opening our Tents to God

The biblical narrative of Abraham’s encounter with God is a paradigm of any encounter: to open our tent to host the Other, the others, in an experience that transforms life and makes us confidants of…

Living the adventure of love requires dedication and a desire to live according to the demands of love.