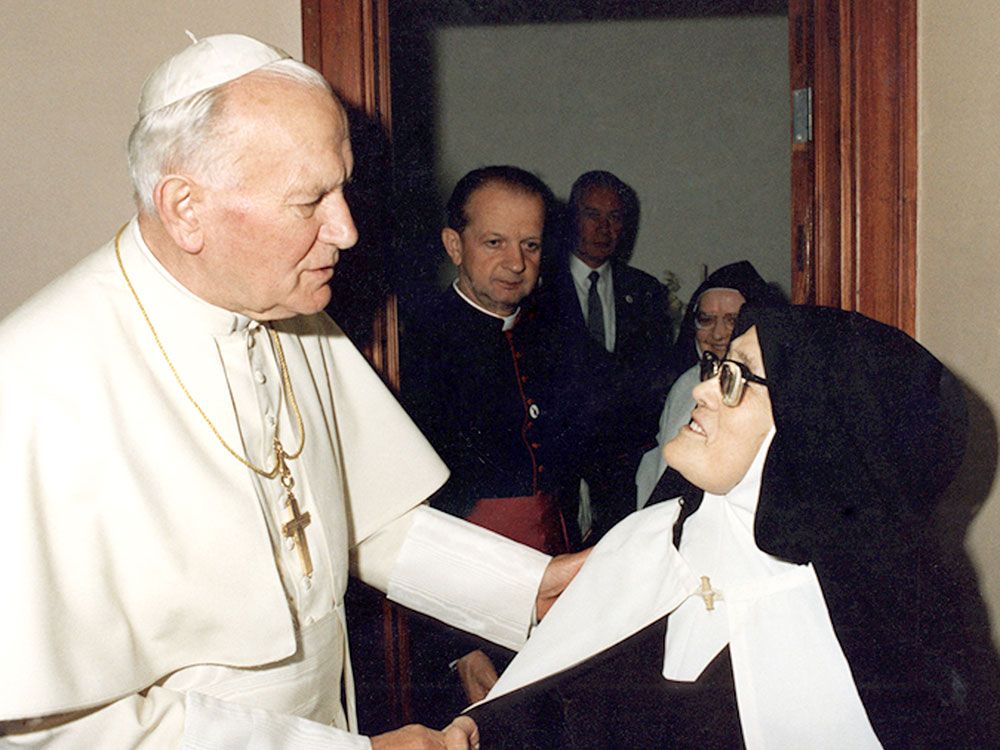 The “Secret of Fatima”, entrusted to Sr. Lucia during Our Lady’s apparitions in 1917, includes an appeal to repentance and the promise of the end of World War I. The fall of the Berlin Wall in 1989 and the end of Communist regimes in Eastern Europe are seen as the fulfillment of that pledge.

On May 13, 1917, in Cova da Iria, a hamlet in the village of Fatima, three children were feeding the herds of their parents: ten-year old Lucia dos Santos and her cousins Francisco Marto, aged almost nine, and Jacinta Marto, who was seven. According to their later testimony to the local parish priest who questioned them, they were seated when they saw, at first, lightning: “They got up and were gathering the sheep, to run away in fear, when they saw another lightning, followed by a lady on the top of a holm oak tree, dressed in white...”

After the first episode in May, other appearances occurred, once a month, until October 13. On this day, a few thousand people gathered in the hamlet, attracted by the news that had begun to circulate. A miracle was promised.

After an intense rain, the storm stopped. “The sun began to move away; it looked like a fire wheel, all around, all around, all around, to this side of the west, and came to Earth,” recalled Lucia’s friend, Maria do Rosario. “When it came down, people were frightened because they thought that it was the end of the world with the sun coming down. But it was not the end, and Lucia said: ‘Do not be afraid because there’s nothing new, this is a miracle of the sun.’”

After these events, Lucia went to school. On the second encounter (in June), “The Lady,” as she referred to the apparition, had ordered her to learn how to read. At that time, Lucia ignored words like ‘Russia’ – Russia’s conversion would be, for decades, one of the most recurrent subjects about the so-called “Secret of Fatima” – until the fall of the Berlin Wall in 1989. Later on, Lucia would dedicate herself to religious life, first as a Dorothean and afterwards as a Carmelite.

It was not until her memoirs were written in 1941 that Lucia disclosed the so-called “Secret of Fatima.” Here she says: “Well, the secret has three distinct parts, and I will reveal two of them. The first was the sight of hell!” The description of what she and her cousins had seen match, to a large extent, the words in a book that functioned as a popular and well-disseminated catechism in 1917 in Portugal. “Our Lady showed us a great sea of fire in human form, like transparent burning embers, all blackened or burnished bronze, floating about in the conflagration, now raised into the air by the flames …”

After this vision, according to Lucia, she heard of the apparition: “You have seen hell where the souls of the poor sinners go. To save them, God wishes to establish in the world devotion to my Immaculate Heart. If what I say to you is done, many souls will be saved and there will be peace.”

Russia and the bishop

The second part of the secret came next and was related to Russia. In her memoirs, Lucia says: “The war is going to end but if people do not cease offending God, a worse one will break out during the Pontificate of Pius XI.”

She was referring to the beginning of World War II. She added: “When you see a night illuminated by an unknown light, know that this is the great sign given you by God that He is about to punish the world of its crimes by means of war, famine, and persecutions of the Church and of the Holy Father. To prevent this, I shall come to ask for the consecration of Russia to my Immaculate Heart, and the communion of reparation on First Saturdays. If my requests are heeded, Russia will be converted, and there will be peace. If not, she will spread its errors throughout the world, causing wars and persecutions of the Church. The good will be martyred; the Holy Father will have much to suffer; various nations will be annihilated. In the end, my Immaculate Heart will triumph. The Holy Father will consecrate Russia to me, and she shall be converted, and a period of peace will be granted to the world.”

For many people, the fall of the Berlin Wall in 1989 and the end of Communist regimes in Eastern Europe were the fulfillment of the promises heard by Lucia in 1917. Following these events, Lucia herself declared as fully accomplished the consecration that the Pope did in 1984. The reference to the end of the “errors of Russia” is now almost absent from the official discourse of the Sanctuary of Fatima, and of the Church itself.

John Paul II in the sanctuary

Lucia would write the third part of the secret in 1944 – but only to be revealed in the year 2000, during the visit of Pope John Paul II to the Sanctuary of Fatima. A “bishop dressed in white,” who looked like the Pope to the three little shepherds, passing through “a big city half in ruins,” was the center of her vision.

It was a recollection of a time in which, for the Church, the Bishop of Rome was like a prisoner in the Vatican after the unification of Italy and the end of the Papal States in 1870. “Having reached the top of the mountain, on his knees at the foot of the big Cross, he was killed by a group of soldiers who fired bullets and arrows at him and, in the same way, there died one after another bishops, priests, religious men and women, and various lay people of different ranks and positions.”

It is well known that in 2000, Pope John Paul II made sure that he read in Lucia’s text a reference to the attempt to assassinate him on May 13, 1981, in St. Peter’s Square, in the Vatican. In a theological commentary published in June 2000, Cardinal Ratzinger, then Prefect of the Congregation for the Doctrine of the Faith and future Pope Benedict XVI, would contextualize this interpretation, while considering “reasonable” that John Paul II had seen in that description the attack he had suffered: “The concluding part of the ‘secret’ uses images which Lucia may have seen in devotional books and which draw their inspiration from long-standing intuitions of faith. It is a consoling vision, which seeks to open a history of blood and tears to the healing power of God.”

Give Us Today Our Daily Bread

Global hunger is a phenomenon that is increasing yearly particularly in countries wracked by conflict. In spite of Zero Hunger by 2030 as being Goal 2 of the U.N.‘s Sustainable Development Goals, it…

Witnessing among a little flock

Considered a mission territory for its tiny catholic presence – only one-and-half percent of the population – Taiwan has been home to the Comboni Missionaries since 1997. An international community of…