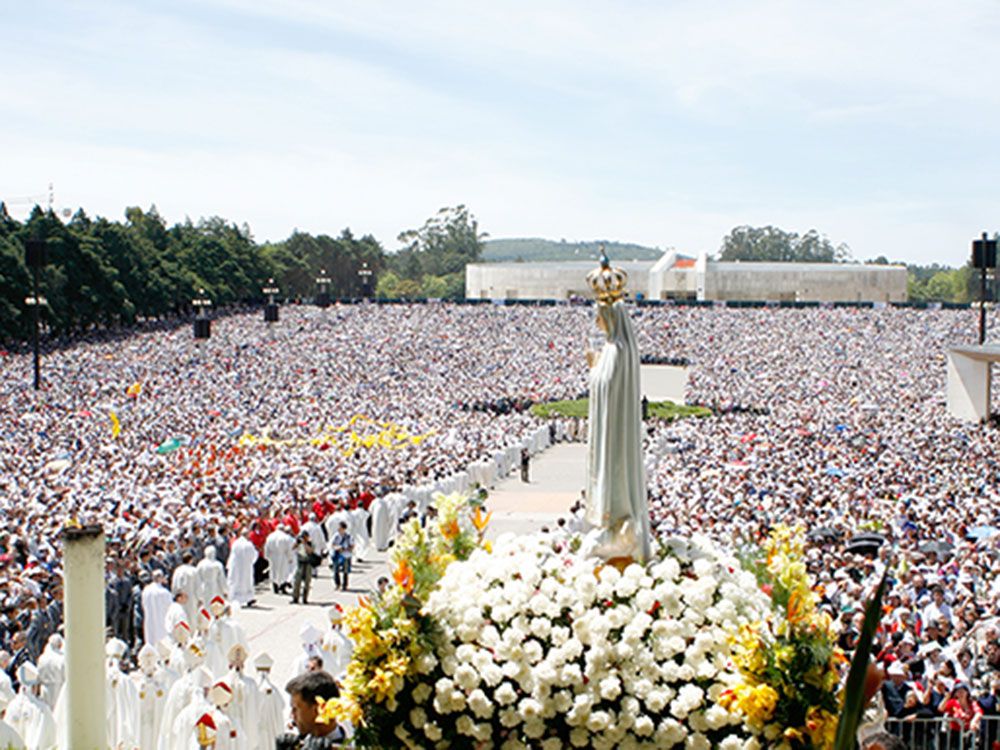 Pilgrimage and the search for God

The most important dimension of the message of Fatima is the idea of conversion, translated or materialized through pilgrimage. The sanctuary continues to attract millions of people – more than five million pilgrims each year – who search for the meaning of life and seek to meet God.

Is it possible that the "Secret of Fatima," locked for decades since 1917, had already been revealed centuries before? What is the real meaning of “My Immaculate Heart will triumph,” a motto of the so-called “Secret of Fatima,” the third part of which was published in 2000? In a theological commentary, then Cardinal Ratzinger and future Pope Benedict XVI explained it: “A heart open to God, purified by the contemplation of God, is stronger than pistols or other weapons of any kind.”

War and peace, the conversion of Russia – seen as a symbol of communism, visions of hell - all this is the “Secret,” an important part of what is called the message of Fatima. But the most important dimension of the message is the idea of conversion, translated or materialized through pilgrimage.

“To save souls has emerged as the keyword of the first and second parts of the “Secret,” and the keyword of the third part is the threefold cry: penance, penance, penance!,” Cardinal Ratzinger wrote in his theological commentary when he was the Prefect of the Congregation for the Doctrine of the Faith. And he added: “The beginning of the Gospel comes to mind: repent and believe the Good News. (Mk 1:15) To understand the signs of the times means to accept the urgency of penance, of conversion, of faith.”

Historian Antonio Matos Ferreira, professor at the Catholic University in Lisbon, included the main topics of the Fatima message in his book A Senhora de Maio (The Lady of May), published last February in Portugal. “Conversion, penance, prayer, a life that must be oriented towards a sacrifice with a restorative and redemptive meaning are themes specific to Christianity, and all of them are present in Fatima and in its message, strongly linked to the pilgrims, those who give them consistency and durability”, he says.

The historical moment of the events of Fatima may also explain this phenomenon: “The ‘apparitions of Fatima’ occurred at a time when the Portuguese society was discussing the place of religion and its validity: if it was or not in the realm of obscurantism and ignorance, if it was a way towards achievement, helping people to find a meaning for their lives.”

A country at war

Fatima served, on the other hand, as a platform for thought and debate on the World War I [1914-18]. When the events narrated by Lucia and her cousins occurred, more than one hundred thousand young Portuguese men were fighting in the battlefields of France and Flanders. At least 8,000 died there. War was, therefore, a painful reality in the country.

According to Lucia’s story, “The Lady” promised her that the war would end immediately [in October, 1917]. But it did not end, and the seer had to rectify what she initially understood. However, the “Secret” also mentioned a new war. It would be the 1961-1974 Portuguese Colonial War in Africa, which would lead to a profound mobilization around Fatima. Pope Paul VI visited the Sanctuary on the 50th anniversary of the apparitions to “ask for peace,” and many young people, conscripted to combat in Angola, Mozambique and Guinea-Bissau, (or their families) used to go there to pray to come back alive or to give thanks for their homecoming.

The references to Russia and communism (unclear at first, but highlighted from the 1930s, would practically disappear after the fall of the Berlin Wall [in 1989] and the collapse of the U.S.S.R. and the pro-Soviet Eastern European regimes. The idea of associating Russia’s conversion to communism “was exacerbated by Stalin’s persecution of the Orthodox Church, the Spanish Civil War and the Cold War,” says Matos Ferreira, the Portuguese historian.

The change in the language and, somewhat, in the rhetoric of the Sanctuary was part of the efforts of Fatima and Holy Sea officials to introduce a new speech, purged of the popular religious ideas of sacrifice and exchanges with the sacred. The aim was also to promote the pilgrimage as a sign of the search for God, and of the universalism of salvation – in accordance with the values of the Portuguese soul and its collective destiny.

This strategy, moreover, corresponds to a new perspective of the pilgrimage. “There is a new religious narrative very much present in the Christian phenomena that offer more vitality: conversion is directed to the individual who is the essential speaker,” describes the Portuguese anthropologist Alfredo Teixeira in an interview included in the book The Lady of May. “It is the individual who is called to convert.”

Praying with your feet

Nowadays, the pilgrims arriving in Fatima are different from those in the past, asserts the current Rector of the Shrine, Father Carlos Cabecinhas. “There are more and more people coming from urban areas, and with a higher academic background, either by means of transportation, or on foot (a minority, though in significant numbers).”

“The pilgrimage on foot is no longer exclusively seen through the prism of sacrifice, and has been gradually perceived as a mystical experience, performed through physical exercise,” says Carlos Cabecinhas as quoted in the aforementioned book. “This translates the perception of something that has always been present although it has sometimes fallen into oblivion: the Christian way of living is deeply rooted in the body, and it is only possible to make a spiritual experience through body mediation, that is, also by physical experience.”

This physical experience of the pilgrimage was described by the Portuguese scholar [and priest] José Tolentino Mendonça as a form of “praying with one’s feet.”

Fatima remains a living phenomenon, also because it resembles the religious search that has been witnessed in Europe: very much personalized. The Sanctuary is now articulated around a message and not a supposed miracle, adds the anthropologist Alfredo Teixeira in the book The Lady of May. “We see that the pilgrims have a very individualized logic, even when they all travel on the same bus. We don’t find here the organized communitarian customs of traditional sanctuaries. In Fatima, we find other practices, more adapted to the ongoing transformation in North Atlantic societies, towards a broad individual re-composition of the religious.”

Thus, Fatima is still important because of a search for the meaning of life, a search for an “identity in movement, very dear to our contemporary experience,” Teixeira articulates. “Pilgrimage is a symbolic gesture that describes this contemporary experience, in a playful way, in a ritual dimension, and very effectively.” It is less dependent on the supplicatory religion and closer to the quest for one’s self. That is, the place where each person seeks to meet God.”

The meeting of Pope Francis with the Grand Imam of Al-Azhar University in mid-year highlighted a continuity of efforts among different faiths to counter terrorism and promote peace in the world.…