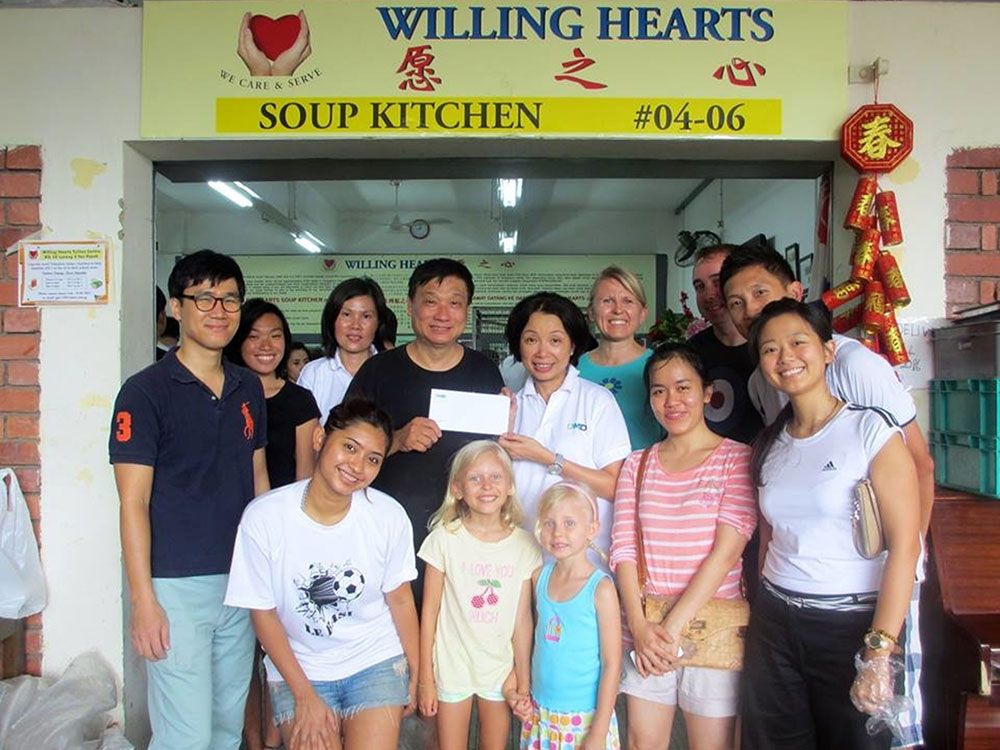 It was a mother’s funeral that started the organization Willing Hearts. Founder, Tony Tay, shares what he learned from his mother, Maggie, and how he manages with a team of volunteers to distribute food and other items to the needy in Singapore.

"Volunteers are heroes,” Tony Tay exclaimed. The Ramon Magsaysay awardee can certainly attest to this. His secular organization Willing Hearts started in 2003, and has been operating all thanks to volunteers.

“Our volunteers come in, we don’t give them a special role to do, whatever they can do, they just do,” Tay shared. “We have about 200 volunteers in all the distribution sites, including the drivers. We have another 100 volunteers who come in every day to cook. The taxi drivers collect food and other items to distribute to the needy,” says Tay.

At 4:30 in the morning, Tony and a few volunteers are already up and moving – preparing packed meals, collecting bread, chopping vegetables and meat and cooking the meals. All this is done before going to work. Two hours later, there are other volunteers who come and pick up the packed foods and deliver them. Most of them, according to Tony, are taxi drivers. “We have those who have licenses but do not have a vehicle, so they use our vans.”

Throughout the day, volunteers come to do different jobs - some pack the food, some clean up, while others prepare for the next day. Volunteers continue on rotation until the day ends at five in the afternoon.

A Booming Economy
Singapore, where Willing Hearts is based, has been recognized by the World Bank as the best city to do business in, and the third most competitive country in the world. With a booming economy, one would think that poverty does not exist in the Lion City.

However, there are those who barely get by. It is about ten percent of the 5.7 million people living in the city state who, with the help of Willing Hearts, have food to eat.

Tony Tay was once one of those who had to live day to day with just enough. His father left when he was five and his mother, Maggie, barely earned enough money for him and his sister with the transient jobs that she had. This was why Tony worked hard. He got into different industries such as insurance, shipping and warehouse. Eventually, he put up his own printing business.

His Mother’s Death
Yet, that was not the time he decided to put up the organization that won him the award which is the Asian equivalent of the Nobel Prize, the Ramon Magsaysay Award. What made Tony decide to start Willing Hearts was his mother’s death. He was overwhelmed by the people who came to pay their respects to his mother.

He recalled, “She has lived a hard life, but she didn’t complain. She had little, but she still shared. She would say ‘I have some food here, you don’t have enough.’ She would still share.” Maggie, who was earning meagre money, would still offer assistance to the church and those who were in need.

“She doesn’t hold a grudge,” Tony said. “When she volunteered to the church, she would cook, and then she would take care of the priests and give help to those in need.”

Another inspiring thing about Maggie was that she did not compel her son to do the same. Tony remembered. “I was too busy. I was enjoying myself at that time, having fun. I liked to go boating.”

Bread For The Nuns
During his mother’s funeral, all her friends had nothing but good words for Maggie. After realizing the impact she had made, he decided to continue what his mother was doing, and that was collecting bread for the Canossian Sisters.

The nuns only needed 30 pieces of bread, but Tony was able to gather around a hundred pieces. The extra pieces of bread were left with Tony. He said that a nun told him he could do whatever he wanted to do with these. So he gave them out.  The nuns gave the bread to the children and the rest Tony distributed to the older people and migrants.

In the following days another nun asked Tony to collect vegetables. Just like before, Tony had collected more than needed. He, again, gave them out. He disclosed, “This people will smile when they get bread. Then they say thank you.”

His wife asked him if he wanted some meals to give away. That was when Willing Hearts slowly began. “All of my mother’s friends were the first volunteers. They started packing the bread and cooked the meals. Then we got a blessing from the bishop to start delivering. And we have never stopped ever since. We didn’t expect to do the feeding program. It just fitted in.”

Two years before her death, Maggie bought canteen equipment, warmers, racks, tables, and others.  “I said to her, we are not in the canteen business. Why did you buy these? She said, 'I will need it one day.'”

“We did not know why she bought those items,” says Tony. “I don’t think she knew we were going to launch Willing Hearts. She just bought it, and after her death, I used it.”

“Willing Hearts started with one word – yes,” Tay said in his acceptance speech. “Yes to the Canossian Sisters to help them collect extra bread that was not sold from a bakery. Yes to distribute the rest of the bread to those who needed it. Yes to collect the extra vegetables from the wholesalers. Yes to my wife when she asked to cook for the elderly who could not cook for themselves. Yes to all who asked for help along the way.”

“And along the way, I asked for help and many said, ‘yes,’ so Willing Hearts is a journey of many who said ‘yes’ to those in need.”

In the week that Tony Tay was in the Philippines to receive his Ramon Magsaysay Award, he no longer needed to worry about his volunteer driven organization, Willing Hearts.
A volunteer had messaged him that “everything is doing well.” He watched the online live video from his gadget and saw that the volunteers were working efficiently. Because of this, he felt proud of the weekend team.

“I do nothing,” he confessed. “I don’t think I do enough. But the volunteers, they sacrifice a lot, they are the main heroes.” He said in admiration, “volunteers are really the ones who make it work.”