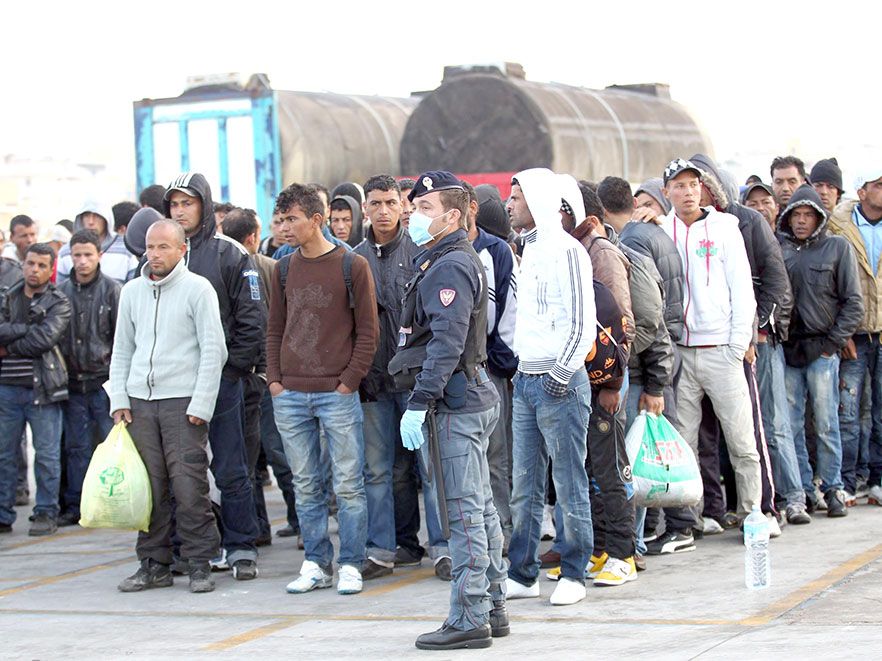 A group of Comboni Missionaries and Comboni Lay Missionaries are networking with associations, organizations and movements in an effort to defend the rights of immigrants and refugees who arrive at the coasts of Italy.

Since September 2013, the port of Palermo, Sicily, has become part of the line of Mediterranean landing spots where migrants from Africa and other countries arrive. Upon their arrival we are there to give out kits containing clothes, shoes, a food pack with a sandwich, apple and a bottle of water.

We don’t want to simply give them material goods, but we also try to collect information on how migrants arriving are treated, since they are already burdened by indescribable experiences suffered before or during the journey. Moreover, they are totally clueless about what to expect in Italy.

Unfortunately, on many occasions, the bodies of those who died at sea also arrive with the survivors. From the start, our concern has been to monitor and provide these bodies a dignified burial in the cemetery of Palermo.

Every year in November, on All Souls Day, civil society joins the representatives of various religions for an interreligious service in their memory. It is an act of solidarity with the victims to denounce the causes of their death, among them the disgusting agreements of Italy, and behind Italy, of Europe with Libya, and other third parties that work to block or reject migrants.

Culture Of Exclusion
We recognize the spread of a culture of exclusion. Today, people feel free of any social responsibility, any tie with others, any common objective. It is urgent to focus again on the stories and the lives of migrants in order to stand up to racism and xenophobia that are based on false assumptions and on information controlled and manipulated by the media.

Through activities we promote in schools and in parishes, we present the stories of migrants by retracing the various phases of their journeys: the reasons why they left, their stay in Libya which upends their lives forever, crossing the Mediterranean and their arrival in Italy, where they end up being mere numbers.

To go beyond the lies, to recognize and defend the rights of migrants as persons, are all very important steps in the building of an inter-cultural and multi-cultural society.

In cooperation with civic and church organizations we share lodging spaces for the migrants, and welcome projects with the idea to produce grassroots meetings and relation with the territory. In the accepting process there are critical stages tied especially to the excessive time they remain in centers of first acceptance and to the small number of special structures or places in the SPRAR (Protection System for Asylum Seekers and Refugees).

In many cases, the insertions of migrants turns into a veritable “lottery.” To reflect on the migrants means to rethink our social, political and ecclesial structures. It means to have the courage to change the current order of things.

Finally, the constant element of our presence is the prophetic denunciation of people and institutions who speculate on the hopelessness of the migrants, exploiting their labor, or of those in the political underbrush, who end up grabbing funds destined for the arrival process.

Calvin wrote, “Any time you build a wall, think of what you leave outside.” What today looks like a protective structure, tomorrow could become a prison. Life develops and grows beyond the wall. But, if fear is contagious, so are courage and hope.

As the Church celebrates the fiftieth anniversary (1965-2015) of Ad Gentes, the Vatican II document on mission, it is enlightening to recall the evolution and content of this pivotal document within…