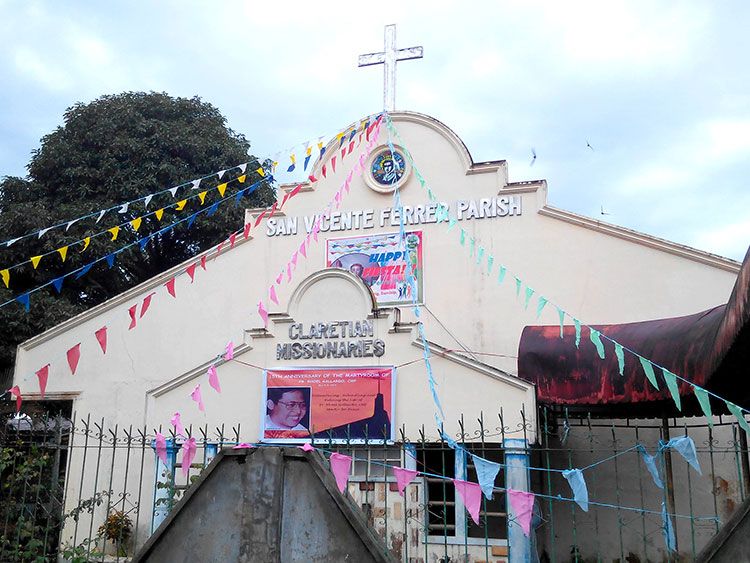 The young Claretian priest Fr. Rhoel (1965-2000), missionary at the dangerous periphery of the archipelago, was conscious of the possibility of a violent death, but he would never abandon his people. His martyrdom, when it came, was a real sacrifice, an omen of heroic faithfulness.

The conclusion of the war against the ISIS in Marawi City, Mindanao, may give the impression that it was the end of the notorious terrorist group Abu Sayyaf which had a leading part in the rebellion.  Because of past experience, we can be certain that its ugly head will rise again in other unexpected  places.

Abu Sayyaf has been a jihadist militant group for more than twenty years. It was based in and around Jolo and Basilan islands at the southwestern part of the Philippines, where for more than four decades, Moro groups have been engaged in an insurgency for an independent province in the country.

As part of its kidnap-for-ransom operations, the Abu Sayyaf have executed some of their male hostages if ransom demands were not met. The group has also beheaded Christian civilians and other believers of Islam without raising any ransoms for their release. That is what happened with Fr. Rhoel Gallardo.

Sacrifice Of The Shepherd
Father Rhoel Gallardo was a young Filipino Claretian priest. He had volunteered to go to Mindanao when the assigned priest there fell ill in June 1999. He served as the director of the Claret School of Tumahubong in Basilan and as parish priest.

On March 20, 2000, the Abu Sayyaf group assailed the Claret School of Tumahubong and burned it. Fr. Gallardo and 52 others, including teachers and school children, were captured and held hostage for six weeks. In April, some of the hostages were released. When the long negotiations between the rebels and the bishop did not come to an agreement, the Philippine Army was forced to attack the formers’ camp in the forest to rescue the hostages.

They found the body of Fr. Gallardo, who was assassinated on May 3, 2000, with several bullet wounds and other signs of torture. His nails were plucked out from his hands and feet a few days before he was shot at close range. The group also killed three teachers and five children.

Personal Qualities
Fr. Rhoel was the eldest son of Dominador Gallardo and Raquel Dayap. He was born on November 29, 1965 at Olongapo City, Zambales. He was the second among a brood of five. Fr. Rhoel was a reserved type, but once you got to know him, he would be always grinning and clowning around. His high school classmates remember him as a witty but quiet fellow who was ever ready to give advice.

“Little Claret” was how Fr. Rhoel was jokingly called by his fellow seminarians when he was still under formation because of his diminutive size and saintly countenance which made him resemble the founder of the Claretian Missionaries.

He had special concern for the “little ones.” A blind woman remembers how Fr. Rhoel would come to her aid. She said: “I knew a lot of priests but nobody ever washed my hands except Fr. Rhoel.”

The Abu Sayyaf rebels, however, did not appreciate this concern for others. Reynaldo Rubio, the principal of Claret School of Tumahubong and Fr. Rhoel’s constant companion during their captivity, revealed the reason of the beating Fr. Rhoel got from four Abu Sayyaf members. This happened when he repeatedly inquired about the whereabouts of a Claret School teacher who was missing for several days in the kidnappers’ camp.

Irritated by his inquiries, the Abu Sayyaf punched and kicked him until he was badly bruised. During the kidnapping, amidst the tension, the optimistic and prayerful Fr. Rhoel used to calm his companions. During those trying moments, he acted like a “Good Shepherd.”

Never To Abandon His Flock
Fr. Rhoel completed his pastoral year in Maluso, Basilan. In his application for perpetual profession, he wrote, “My pastoral immersion in Basilan last year made me experience concretely our witnessing and evangelizing life and mission to the poor as well as our community’s presence in the dialogue of life and faith with our Muslim brothers and sisters. These experiences as a whole have become a real challenge to me to be a committed missionary and active witness to God’s liberating love for humanity.” Fr. Rhoel made his perpetual profession and was ordained to the priesthood in 1994.

A few years after his ordination, Fr. Rhoel volunteered to go to the most dangerous mission of the Claretians in the Philippines, Tumahubong, as Parish Priest of San Vicente Ferrer Parish and Director of Claret School. This is where he reached the apex of his short missionary career.

Fr.Rhoel initially had difficulties in his new assignment. Months before his kidnapping however, he exhibited a significant change. He became more appreciative of the people around him. The seriousness of his role as pastor of the Christian community troubled by the Muslim extremists had marked a profound impression in him as a missionary. He vowed never to leave his flock no matter what. He was ready for any eventuality. Soon, God would ask him the supreme sacrifice.

A New Filipino "Saint"
A requiem Mass for Fr. Gallardo was celebrated by Cardinal Sin on May 9, 2000, at the Immaculate Heart of Mary Church in Manila. His body was laid to rest in a cemetery near the Claretian Formation Center.

To commemorate the fifth anniversary of Fr. Gallardo’s death in May 2005, a group of his friends began to compile testimonies and documents to support his beatification as the “first Filipino martyr and saint of the new millennium.”

On May 10, Pope Francis visited Nomadelfia, the small town where “brotherhood is the law”. This example of Christian utopia, inspired by the community of the Acts of the Apostles, is the dream of a…