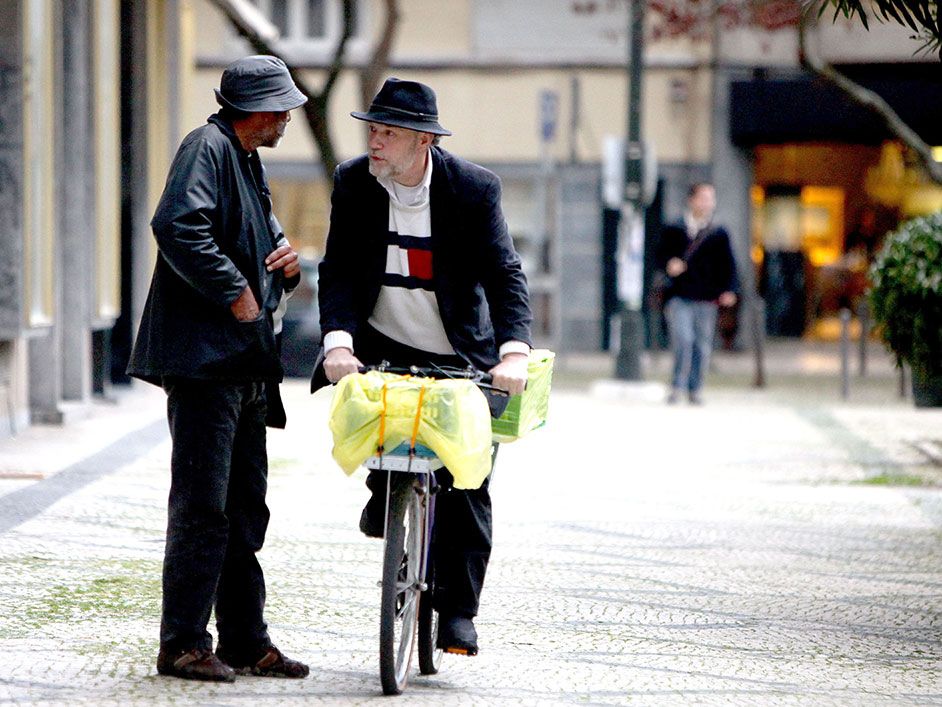 The concept of the Re-food movement began in 2010. In its origin, it was the awareness that all the leftover cooked food in restaurants and hotels ended up in litter bins when they were not consumed on the same day that these were prepared.

Hunter Halder, the founder of Re-food, thought this waste was outrageous and today he can feel proud that the Re-food volunteers are cutting food waste in Portugal by 500 tons a year.

Halder, who was at that time a 59-year-old American from Virginia, and been living in Portugal for almost 20 years, suddenly decided to stop working for his own benefit and work instead for the the community where he lived.

His project developed and Re-food 4-Good, a non-profit association, officially started on July 18, 2011, four months after the organization’s first collection and distribution of food.

Going By Bike
Riding a donated bike, Hunter Halder began in his own neighbourhood in central Lisbon, visiting restaurants and gathering cooked, but unconsumed food that would otherwise end up in the garbage, and giving these instead to hungry people.

At that time, he secured the support of 30 restaurants to “feed” his project and the leftovers that he collected at the end of each day provided for the nutrition of 34 needy people, living in  the Nossa Senhora de Fátima neighborhood, at the centre of the Portuguese capital.

When he started, he was the only volunteer, but after the first month, 30 people of goodwill had already joined his project, working with him by gathering good food from the restaurants and distributing it to people in need.

Restaurants Collaborate
A total of 1,500 restaurants nationwide allow the volunteers to bring food aid to 6,300 beneficiaries and still “deliver the surplus to other associations, whose aims are similar to ours, but whose beneficiaries we do not calculate”.

“We are currently distributing 90,000 meals monthly, which means one million meals per year. This represents 500 tonnes a year of bio-waste that will not go to pollute the environment”,  Halder says.

Three times a day, Re-food volunteers collect surplus food from restaurants and, once a day, also from supermarkets. The food is then brought to the closest local centre, where other groups of volunteers divide it into portions, according to the size of each beneficiary household. In addition to cooked meals, these portions often include fruits and fresh vegetables, coming from  supermarkets associated with the movement.

Late in the afternoons, a third group of volunteers go and distribute food among regular beneficiaries who live farther away from the premises of Re-food and also to sporadic beneficiaries who flock to the movement’s centres.

Usually, all food arriving in one day is distributed among the beneficiaries on that same day, or at the latest, the next day, since Re-food premises lack large storage areas, apart from several refrigerators essential to their work.

Poverty Affects All Social Classes
Portugal is a member of the European Union, yet it cannot be considered a rich or an affluent country. On the contrary, Portugal remains one of the poorest countries in Europe, with a per capita GDP of EUR 1,550. Among its 10.3 million inhabitants, which include a population of 400,000 immigrants (according to 2016 data), there are 2.6 million people who are at risk of falling into poverty, as well as some estimated 4,000 homeless citizens.

In 2013, unemployment affected almost 18% of the working population, placing in a needy situation inhabitants who until that moment had no financial difficulties at all. Nowadays, the unemployed population is still estimated at 8.5%.

For all these reasons, the citizens who rely on food aid from Re-food belong to all kinds of social classes of different nationalities. “We have among our beneficiaries poor Portuguese people who have been poor all their lives, professionals who had no financial difficulties before the economic crisis of 2008 and feel them today, pensioners who cannot feed themselves with a retirement pension of EUR 300, students who, after paying their fees, are left with no money to eat, Portuguese people from other cultures, such as gypsies, and immigrants from Syria, Ukraine, Africa, among other countries”, Hunter Halder explained.

The Power To Change The World
As far as Re-food is concerned, the three most valuable resources ready to be activated in every community are: first of all, the surplus food in perfect condition that is thrown away daily; secondly, people in economic need requiring daily aid; finally, people of good will “sitting in a couch instead of helping,” and who have the capacity to establish a “human bridge” between excess and need.

For this reason, Re-food’s mission consists of three crucial aspects: rescuing good food (and the consequent reduction of food waste), feeding people in need and, last but not the least, involving the entire community in this effort.

In its founder’s opinion, the latter is, indeed, the most important aspect: get people of good will to leave the comfort of their homes (and of the couch) and put their skills to the service of these two important objectives: reducing food waste, on one side, and hunger, on the other.

“We move hundreds of tons of food every year and we receive all of the support we need to continue this work. But these are not our greatest resources. The biggest resource is the good will of people involved in this project,” concludes Halder.

At least 50 countries depend on wheat produced by Ukraine and Russia to feed their populations. Most of them are in Africa, the Middle East, and Asia, where there are even more inhabitants and even…

On a Social Media Lampstand

Social media today has become the new pulpit in spreading the Good News. The Church urges her faithful to use it as an effective tool to promote what is praiseworthy and good in people. Communicator…

Martyr of the Amazon

Returning from a mission of peace, Father Ezequiel Ramin, a 32-year-old Comboni missionary was gunned down in Rondonia, Brazil, in 1985, by armed guards hired by a landowner. The evidences of his…