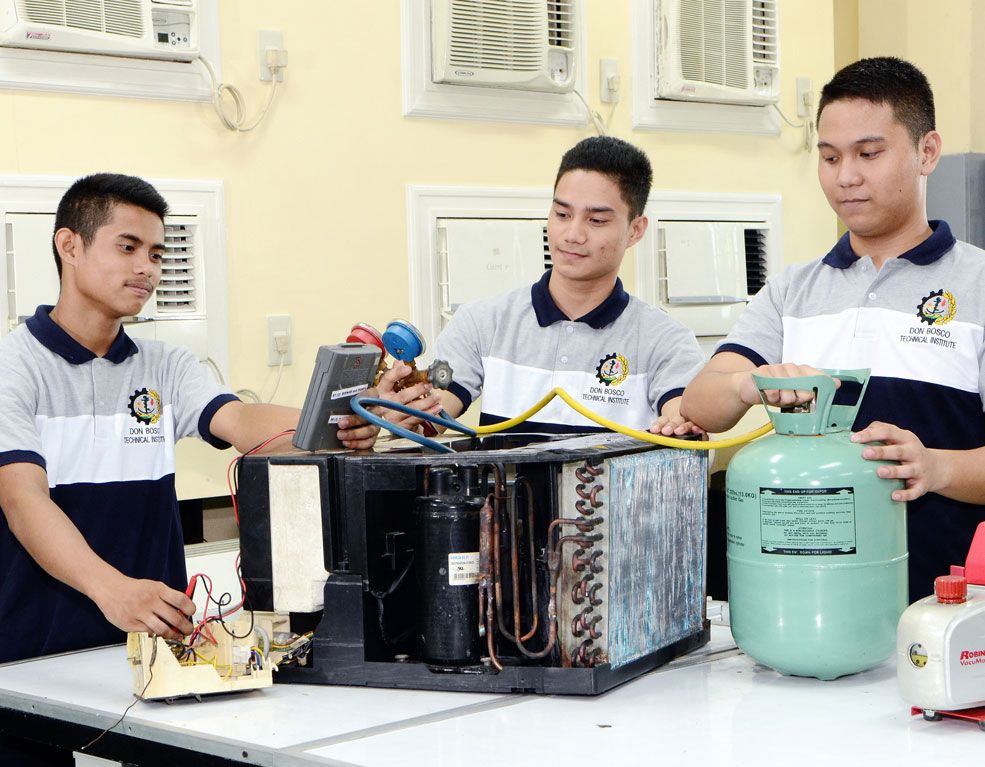 Through skills training and values formation, Don Bosco TVET Centers across the country are empowering disadvantaged Filipino youths to rise above poverty thereby giving them a chance to a better life.

Christopher Salimbao and his five siblings started working when they were children. They had no choice. Their widowed mother’s meager income as a laundrywoman was barely enough to put food on the table. After selling pandesal (Filipino bread roll) in their neighborhood in the early morning, they scavenged at various garbage dumps in Tala, a barangay in Caloocan, one of the country’s most densely populated cities.

They collected scrap iron, cartons, plastic, old appliances and furniture, and other detritus of modern society, and sold these to junkshops. After graduating from high school, Christopher worked as a contractual sales clerk in several Metro Manila malls, earning minimum wage. He wanted to pursue further studies in order to land a permanent and better paying job, but their family could not afford the cost of sending him to college.

Camille Alpajora is from the municipality of Mauban in Quezon, a province located about 150 kilometers south of Manila where farming and fishing are the main sources of livelihood. Her father and mother are often not at home because they have to work and make ends meet. Being the eldest, Camille felt it was her responsibility to stay at home to look after her younger siblings. After finishing high school, she decided not to pursue a college education. Like her friends in their rural town, many of whom are already married with children, she felt her dream of escaping poverty and giving her family a better life was slipping away.

Fortunately, Christopher and Camille were given a chance. They are among the more than 18,600 out-of-school and underprivileged Filipino youth who have graduated from the Don Bosco Technical Vocational Education and Training (TVET) Center in Makati City.

To date, the 17 Don Bosco TVET Centers across the country—nine in Luzon, seven in Visayas, and one in Mindanao—have produced 84,335 alumni.

Thirty-year-old Christopher is now a Technical and Project Coordinator for Electrolux Philippines, a leading manufacturer of home and kitchen appliances. His integrity, humility, and excellent work ethic have earned him the trust and respect of his colleagues, which bodes well for his career advancement. Camille currently works as a Preventive Maintenance Service Coordinator at Daikin Philippines, the local subsidiary of the world’s leading air conditioning manufacturer. The industrious 19-year-old plans to put up her own refrigeration and air conditioning service center someday.

“Christopher and Camille were given a chance to transform their lives and rise above poverty. Through hard work and perseverance, they made the most out of this opportunity,” says Engr. Armando Marquez, the External Relations Officer of the Don Bosco TVET Center in Makati.

“The mission of Don Bosco-One TVET Philippines is to provide skills training and holistic development of poor Filipino youth through quality technical education. We form them to be good Christians and upright citizens who are highly qualified, globally competitive, and gainfully employed. Our ultimate goal is to help uplift the lives of poor Filipinos,” says Fr. Vitug.

“Our students are mostly Catholics, but we also have students who are adherents of Islam, Iglesia ni Cristo and other religions. We do not discriminate; applicants are accepted based solely on merit,” explains Fr. Vitug.

Graduates of Don Bosco TVET Centers are in demand among automotive and industrial companies because of their reputation for technical and vocational proficiency, positive attitude and good work ethic. “Many Don Bosco TVET alumni occupy high-level positions in the companies they work for, both in the country and abroad. They are supervisors, assistant vice presidents and ship captains. Others are entrepreneurs who run their own business,” says Fr. Vitug.

Don Bosco Makati is a private Catholic educational institution owned and operated by the Salesians of Don Bosco (SDB), which caters to middle-class pre-school, elementary and high school students.

“In the nearly 50 years of existence of Don Bosco TVET Centers, we have witnessed how education has transformed the lives of thousands of our graduates,” says Fr. Vitug. “We believe that when you educate the youth, you help end poverty in their generation.”

The betterment and education of street children, juvenile delinquents, and other disadvantaged youth was the life mission of the Italian priest Fr. John Bosco, the founder of the Salesians of Don Bosco (“Don” is a traditional Italian honorific for priest). During the 19th century Industrial Revolution, while working in Turin in Italy, Don Bosco witnessed how young people from nearby villages who were migrating to the city to find work became victims of exploitation, many of them becoming petty criminals and ending up in jail.

Moved by what he saw, Don Bosco established a school where the disenfranchised youth could play, learn about the faith, and acquire vocational skills for gainful employment.

He developed teaching techniques that were based on love rather than punishment, a method which became known as the Salesian Preventive System. Less than 50 years after his death, St. John Bosco was canonized on April 1, 1934. Don Bosco’s mission to uplift the lives of disadvantaged youth lives on through the TVET Centers that bear his name.

Sr. Nenet Daño, a Good Shepherd sister and licensed social worker, has passionately undertaken the task of helping drug users and pushers, in an attempt to protect them from imminent death following…