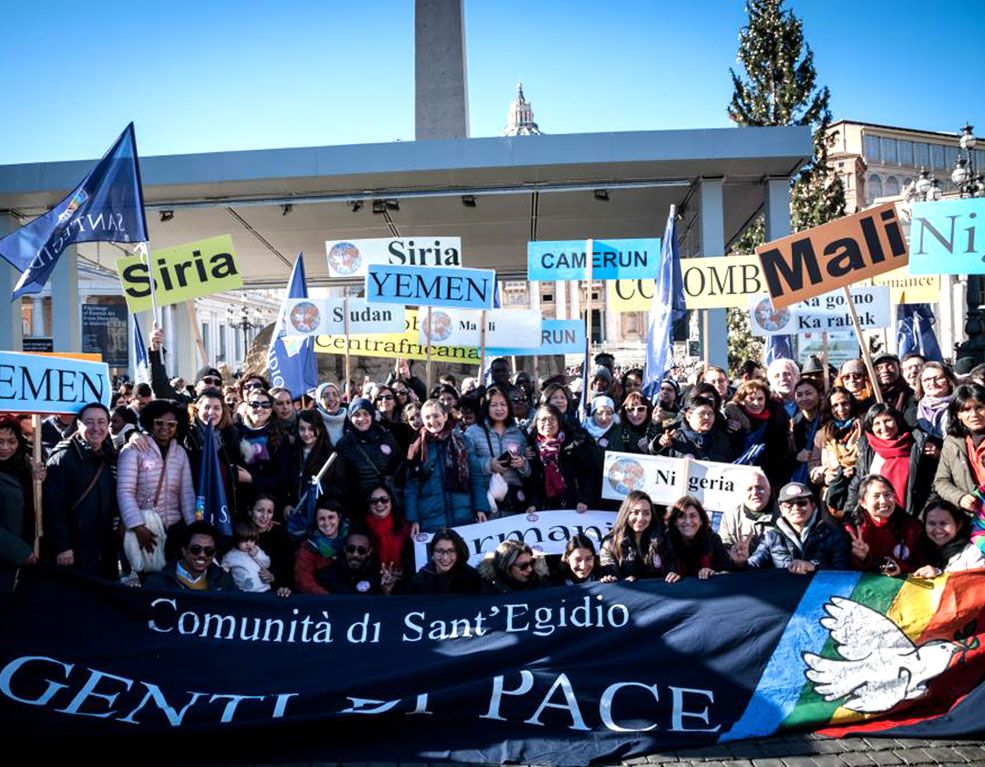 It all started in the turbulent year of 1968, when a group of college students took to reading the Gospel seriously and got involved with the suburban poor of Rome. The Community of Saint Egidio is now a world event with tens of thousands of members in many countries.

In February 2009, while visiting Rome, George W. Bush wanted to see everybody who mattered in world affairs: Pope Benedict, the political leaders of Italy and, remarkably enough, the members of the Community of Saint Egidio, especially its founder, Professor Andrea Riccardi.

This is not surprising since the Community of Saint Egidio has been nominated for the Nobel Prize several times. In 2004, it was awarded the Balzan Prize for its commitment in reviving the peaceful co-existence among different ethnic groups and in promoting humanitarian action, peace and brotherhood among peoples regardless of religious beliefs.

A Fruit Of Vatican II

The Community of Saint Egidio was born in Rome out of the initiative of Andrea Riccardi, then a seventeen-year-old college student who, in the climate of renewal promoted by Vatican II, started gathering a group of other college students in order to read and practice the Gospel.

In a few years their movement had spread to different student environments and became concrete in activities on behalf of the poor and marginalized. In the popular quarters at the outskirts of Rome, the work of evangelization started and soon gave origin to the adult community. In 1973, in the church of Saint Egidio at Trastevere, the first church of the community originated the tradition of the evening common prayer that since then accompanies the communities all over the world.

In the second half of the 70s, the community began to take root in other Italian cities and then spread throughout Europe, Africa, America and Asia in the 80s. Since its origin, the community has cared for all kinds of impoverished people: the aged, the immigrants, the terminally ill, the abused and abandoned children, the physically and mentally handicapped, drug addicts, victims of war, prisoners and death row convicts.

On May 18, 1986, the Pontifical Council for the Laity decreed the erection of the Community of Saint Egidio as International Lay Association of Pontifical Right. The leadership of the Community is entrusted to the President, his council, and a priest-assistant. The current president is Prof. Marco Impagliazzo.

The Community of Saint Egidio has about 60.000 members in more than 70 countries in Europe, Africa, Asia and North and South America.

Together with prayer and the communication of the Gospel, the community has built up forms of help and friendship, caring for the dignity and the rights of the human person. It is this very friendship with and closeness to the poor that have made the Community of Saint Egidio better understand that war is the mother of all poverties and consequently commit itself openly in favor of peace and peacemaking.

On October 27, 1986, Pope John Paul II invited the leaders of the world’s religions to pray and fast for peace at Assisi. Pope John Paul II’s actions on that occasion have become a point of reference for the Community of Saint Egidio. The Community has convened a gathering of representatives of all religions in different cities of the world every year. Past gatherings were in Warsaw, Brussels, Milan, Florence, Bucharest, Padua, Venice, and Barcelona.

This commitment has grown with the work of mediation for peace, especially in the troubled continent of Africa. In Mozambique, a country ravaged by more than twenty years of civil war, the Community of Saint Egidio was naturally accepted as a peacemaker. Thanks to the mediation of the Community of Saint Egidio, the peace agreement was signed in Rome on October 4 1992.

Inspired By The Acts Of The Apostles

The Community of Saint Egidio is a family of communities rooted in different local churches. The term “Community” mirrors a demand for friendship and brotherhood that the members dispersed in big cities embody in their daily lives.

The Community members follow the example of the first Christians in the Acts of the Apostles, the preferential option for the poor of the post-conciliar Church and the primacy of prayer.

It is amazing to see how the little seed sown in the year of the students’ revolution has grown with the peaceful strength of faith and love into a big tree that gives shelter to thousands if not millions.